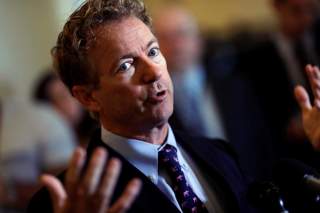 Ever since the end of the cold war, America has debated its role in the world. Should it intervene abroad on behalf of democracy and freedom, as liberal hawks and neoconservatives urge? Or should it focus on rebuilding at home and protecting its vital national interests?

Rand Paul, the junior senator from Kentucky spoke at length at a dinner hosted by the Center for the National Interest on March 7 about the need actively to engage states with which America has substantial disagreements, while rejecting the “monolithic foreign policy that has ruled this town (Washington DC) for over seventy years.” Paul has long been one of the most articulate spokesmen for a change in Washington's approach abroad. The true isolationists, according to Senator Paul, are those who refuse to seek out avenues for dialogue and diplomacy with rival nations and limit all interactions with such states to efforts at regime change, which often have dire, unintended consequences. As an alternative, the Senator expressed a vision for a realist, non-interventionist American foreign policy emphasizing diplomacy, military restraint, and increased congressional oversight.

Stressing the need for a “robust diplomacy with those we disagree with,” Senator Paul advocated for legitimate attempts at diplomatic outreach towards countries such as Iran and North Korea, as well as attempts to broker negotiations with Taliban leaders in Afghanistan, describing diplomacy as a preferable option to military force. Senator Paul criticized those who favor aggressive military action and regime change as the default responses to international disputes. The Senator contended that America’s willingness to forcibly depose former Libyan Prime Minister Muammar Gaddafi, a leader who agreed to peacefully disarm his nuclear weapons program in 2003, only served to harden the resolve of North Korea and Iran to develop weapons programs of their own to deter American aggression and ensure the survival of their regimes. Still, the senator noted that “diplomacy requires implied force,” and that the United States must be willing to make it clear to its potential foes that military action remains a credible option if America’s vital national interests are challenged, even if such measures are best viewed as a last resort.

One of Senator Paul’s prescriptions to ensure that war becomes the exception rather than the norm in American foreign policy is to curtail the ability of the executive branch to initiate military action without congressional consent. The senator expressed disappointment in Congress for shirking its traditional oversight powers, as well as in the “imperial presidency,” for overstepping its constitutional authority in initiating military action against foreign entities. Invoking James Madison’s 1798 letter to then-Vice President Thomas Jefferson, Senator Paul espoused the belief that, “the Executive is the branch of power most interested in war, and most prone to it,” and that the restoration of the system of checks and balances that once restrained executive power in the realm of foreign policy is essential to avoid costly wars that do little to further the interest of the United States.

In particular, Senator Paul expressed a desire to avoid a conflict centered around North Korea’s nuclear weapon and intercontinental ballistic missile programs. He described the situation has having no military solution that could resolve the dispute without significant costs to the United States, and indicated that he would not support requiring the termination of North Korea’s nuclear program as a precondition to any talks, an idea that had previously been floated by the Trump administration. However, Senator Paul was quite complimentary of the role that President Trump and Secretary Tillerson played in potentially bringing North Korea to the negotiating table, stating that the President’s “bluster” combined with Secretary Tillerson’s more diplomatic approach served as an effective good cop/bad cop strategy to incentivize North Korea seeking out dialogue with the United States. Noting that neither Russia or China have reason to be secure with the prospect of a nuclear-armed North Korea, the Senator expressed hope that the State Department could convince these countries to actively support future efforts to find a diplomatic solution to the ongoing dispute, stating that, “the job of the State Department is diplomacy, not war.”

Despite complimenting the leadership of the president and the secretary of state in addressing the North Korean threat, Senator Paul showed willingness to break with the administration in other realms. Notably, the Senator expressed his opposition to the tariffs on imported steel and aluminum that President Trump has issued, which many economists have warned will do little to benefit the American economy and could result in a trade war. Not only did Senator Paul express concern that the proposed tariffs could undermine America’s commitment to free trade, but he also noted that America’s substantial trade with China could serve to strengthen relations between the two nations, which could be disrupted by a new tariff regime.

Additionally, Senator Paul voiced his concerns regarding the actions of Saudi Arabia’s military in Yemen, as well as our role in enabling our ally in the conflict. The conflict in Yemen, which has pitted the Saudi-backed government of President Abdrabbuh Mansur Hadi against the Houthi rebels and their Iranian supporters, has left Yemen ravaged by Saudi airstrikes and a devastating blockade of Yemen’s ports by Saudi Arabia and its allies. Senator Paul criticized America’s sale of arms to Saudi Arabia, and compared a 2016 Saudi attack on a funeral in Yemen that left 140 civilians dead to the 7th century battle of Karbala in terms of the lingering resentment it will engender in the region’s populace. Questioning whether American and Saudi airstrikes are, “creating more terrorists than we kill, or killing more terrorists than we create,” the senator reiterated his longstanding opposition to American arms sales to Saudi Arabia, and urged policymakers to heed the lesson of the Iraq war: that American intervention in the Middle East “leads to more people strapping on bombs,” not fewer.

The senator also spoke about another cause for which he has long advocated: constraining the government’s ability to monitor the private communications of its citizens. Criticizing policies such as Executive Order 12333 and the recently-reauthorized Section 702 of the Foreign Intelligence Surveillance Act which allow the government to monitor communications between Americans and foreign nationals, Senator Paul lamented that the communications of American journalists and international contacts can be scrutinized with virtually no oversight. When discussion emerged among the dinner’s participants regarding the conditions under which the government actually monitored the contents of such conversations, Senator Paul argued that such surveillance activities infringe upon the fourth amendment even if the contents of the data collected are never reviewed by the state, and that, “the collection of the data IS the violation.”

The need for openness, transparency, and oversight served as a recurring theme throughout Senator Paul’s criticism of America’s existing foreign policy, with much of the blame for America’s failed policies towards Iran, North Korea, and Yemen being attributed to the lack of a true debate regarding these issues in Congress. Despite the many censures levied by the senator against the United States foreign policy establishment, there was still an expression of optimism regarding the future of American international relations. Asked whether anything can be done to improve congressional decision making on questions of foreign policy, Senator Paul expressed his faith in the belief that, “fact wins out over emotion over a long period of time.”