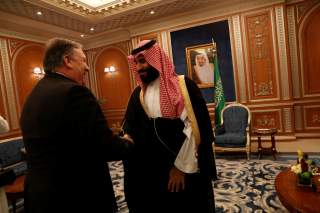 Up to now—that is, pre-Khashoggi—the key question about a U.S.-Saudi nuclear agreement was whether to insist on a Saudi pledge not to enrich uranium. The White House, seeing the Saudis as close friends and fixed on the possible jobs that a Saudi nuclear contract (or subcontract, as South Korea has the inside track) might bring to Donald Trump’s electoral base, wanted the deal. But now, the murder of Jamal Khashoggi in the Saudi embassy in Turkey is a sharp wake-up. What were we thinking in contemplating any nuclear installation for the Saudis?

Last fall, arm wrestling over the possible commitments in a prospective U.S.-Saudi nuclear deal obscured that we were dealing with a thuggish absolutist regime with no scruples. Jamal Khashoggi’s disappearance makes it hard to gloss this over. For now, the Saudis have to be careful in dealing with us as they depend on us for their security. President Donald Trump didn’t exaggerate by much when he said they wouldn’t last two weeks without our protection. But what happens if that security relationship changes? Let’s not forget that even under the current security arrangements the Saudis years ago secretly bought missiles from China, and recently signed a multibillion-dollar arms deal with Russia.

All past concerns—the medieval government, the lack of domestic law, the treatment of women and so on—were supposed to have been swept away by the ascension to power of the “modernizer,” the crown prince, who rapidly became a new best friend of the president’s family. He was ready to see past enmity with Israel and to stand up to Iran. He did a victory lap through Washington with the support of highly paid public relation firms who broadcast his struggle against the extreme Wahabis and his decision to let women drive. What more could anyone ask for?

It worked for a while, until it became evident that the regime still brooked no dissent and jailed the women who had campaigned for the right to drive. Saudi courts handed out death sentences for political criticism. Select Saudi billionaires were reportedly tortured until they disgorged their money, $100 billion in all. Meanwhile, the crown prince made clear in a CBS interview that Saudi adherence to the Nuclear Nonproliferation Treaty is conditional: If Iran opts for a bomb, so will Saudi Arabia.

Which brings us back to the prospective Saudi nuclear deal, in fact, to U.S. nuclear export deals in general. There is a pretense that Washington engages in every time one of these 123 civil-nuclear cooperation agreements (so-called because they fall under Section 123 of the Atomic Energy Act) comes before Congress. It is that we are dealing with law-abiding countries whose word is good, and that on that basis we can put a separation between the “peaceful” nuclear facilities and activities covered by the 123 agreement and any possible military application of the facilities and activities. The congressional battle then proceeds over the agreement details.

But everything depends on whom we are dealing with. Diplomatic lawyers can twist the meaning of agreements. In the 1950s, India promised not to use U.S. heavy water to make plutonium for bombs. When it did so in the 1970s, it called it a “peaceful bomb.” Unfortunately, the State Department kept quiet (one hopes out of shame). Israel promised not to be the first to “introduce” nuclear weapons to the Middle East. When it did so, we pretended, and still pretend, we didn’t notice.

Of course, we insist on inspections by the International Atomic Energy Agency. But as much as the IAEA inspection system has improved, it is hardly foolproof. In principle, the inspections are designed to make sure that nuclear wrongdoing is detected in time to thwart the creation of a bomb. But in reality, the system is not that tight even when it works as designed, and the needed powerful reaction of the world community to violation of the rules is by no means a sure thing. We should also not underestimate the ingenuity of determined would-be bomb makers to spoof inspectors. In the 1960s, the Israelis went so far as to temporarily rebuild parts of the Dimona reactor complex to fool American inspectors. And a country can simply eject the inspector altogether, as North Korea did, and get on with making bombs.

All these real-world issues get ignored in the ritual examination of 123 agreements by Congress, as is the likelihood that the government on the other side of the agreement may change, possibly radically, during the decades-long life of the agreement. The successor government may have a very different attitude towards it. Had we managed to sell to the Shah of Iran some of the twenty-three reactors he was contemplating buying, which would surely have come with fuel facilities as he was a reliable and important ally, they would all now be operating in the Islamic Republic. Yet in defense of its 123 agreement, the Executive Branch presents the current bona fides of the counterparty as if they are set in stone.

These attitudes and practices are archaic holdovers from the naive Atoms for Peace era. You would think we would have learned from a half-century of experience with civil-nuclear relations that nothing is more important than the character of the country we are dealing with. As for the current proposal to supply Saudi Arabia with powerful nuclear technology, we should just say “no.” It’s not about jobs (few of which are involved, in any case). It’s about blocking further spread of nuclear weapons in the Middle East.

Nor is it about the prince, whom the president seems to have pushed to the sidelines by speaking directly to the king about Khashoggi. The problem is the kingdom is not trustworthy. We should not supply it with reactors, and we should also urge others, starting with South Korea, not to do so.