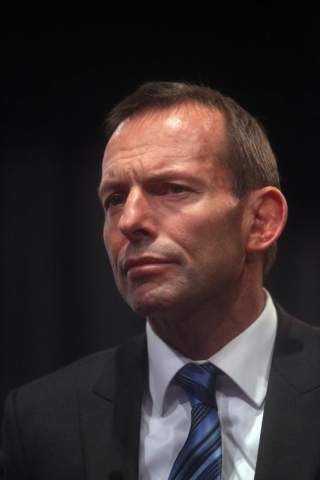 TONY ABBOTT LIKES TO TELL THE STORY about his first visit to the United States as a newly elected member of the Australian Parliament. It was 1995, and he was widely seen as a rising star in the center-right Liberal Party, where the word “liberal” still means more or less what it meant in the nineteenth century. He had also distinguished himself as a leading opponent of the Labor government’s ill-fated proposal to replace Australia’s constitutional monarchy with a republic.

But something got lost in translation: Abbott’s Washington-based hosts, the U.S. Information Agency, had been told that he was “very liberal and strongly anti-Republican.” Which meant his itinerary during his two-week study trip consisted of meetings with only commentators and interest groups on the far left of the American ideological spectrum.

Trans-Pacific jokes aside, the conventional wisdom of just a few years ago held that Abbott was too right-wing to become prime minister down under, a throwback to a bygone era. After all, the devout Christian and former Oxford boxing blue is skeptical about abortion, same-sex marriage and alarmist claims of global warming. He is an Anglophile who is a great admirer of the United States and its leadership role in the world. (He once said, “Few Australians would regard America as a foreign country.”) He champions “smaller government, lower taxes, greater freedom, a fair go for families and respect for institutions that have stood the test of time.”

When he is not on message, which is rare for spin-soaked politicians in the relentless 24-7 media and Internet environment, he is gaffe-prone. During the federal election campaign last August, he said that a female parliamentary candidate had “sex appeal” and that his opponent, the then Labor prime minister Kevin Rudd, was not the “suppository” of all wisdom. He has ticked almost every unfashionable box in modern politics.

Like Margaret Thatcher’s victory in the UK Conservative Party’s leadership contest in 1975 and Ronald Reagan’s nomination as the Republican presidential candidate in 1980, Abbott’s narrow victory in the Liberal Party leadership ballot in 2009 delighted his political opponents, who had dismissed him as easy to beat in a general election. The Canberra press gallery—our equivalent of the Washington press corps—did not take him seriously as prime ministerial material. He’s “too archetypically conservative.” He’s too much of a “King Catholic.” He views the world through a “narrow ideological prism.” He’ll “split the party.” “Australia doesn’t want Tony Abbott. We never have.” So said seasoned observers of Australian politics.

Nor were they alone. The nation’s intelligentsia was contemptuous of the “Mad Monk.” Under Abbott’s leadership, one distinguished academic warned, the conservative Liberal Party would become “a down-market protest party of angry old men and the outer suburbs.” Even the U.S. ambassador in Canberra, in a cable to Washington that WikiLeaks revealed a few years ago, called him “a polarizing right-winger.”

And yet for all his evident shortcomings, the fifty-six-year-old Abbott reminds one of the adage that low expectations are a priceless political asset. He has seen off three Labor prime ministerships in as many years. And last September, he won one of the nation’s biggest landslide victories since World War II. Simply put, the man who once trained to be a Catholic priest has resurrected the conservative cause, which had languished in the Antipodes following the downfall of John Howard, Australia’s prime minister from 1996 to 2007, whom Abbott served as a confidant and cabinet minister.

SO HOW DID THIS POLITICAL NEANDERTHAL win power in Australia? What defines the Abbott worldview? Is he a role model for American conservatives? And are the early reports of his political demise exaggerated?

From the outset, I should acknowledge that I have known Abbott for fifteen years. I like him enormously and consider him a friend, or—in Australian parlance—a top bloke with a larrikin streak. He’s been so faithful to his mates that he has not lost any. He is a volunteer bushfire fighter and lifeguard in his federal seat on Sydney’s northern beaches. He is deeply committed to the welfare of indigenous Australians, and spends weeks living in remote Aboriginal communities in the outback. There is nothing phony about him.

But although I am not one of his many critics in Australia’s media and intellectual community, neither am I an uncritical admirer. Among other things, his oratory tends to lack range and theatrical effect. At times, he is even rhetorically challenged, more likely to address his fellow citizens in simple sound bites than in an engaging conversational style. He gave unqualified support to the previous government’s commitment of Australian troops in the depressing and endless war in Afghanistan. Never mind that our presence there had not been yielding lasting improvements that were commensurate with the investment of blood and treasure. (Australia lost nearly forty lives in the last four years.)

Moreover, despite his vaunted commitment to reducing the size and scope of the federal government, he is hardly the second coming of Milton Friedman. His government, not even three months old last December, controversially rejected a takeover bid by the U.S. agricultural giant Archer Daniels Midland of Australia’s GrainCorp. Given Abbott’s declaration on the night he was elected that Australia was “open for business,” it was an uncharacteristic move, one that earned an editorial rebuke from the usually sympathetic Wall Street Journal. His plan for an expensive paid paternal-leave program also suggests a social-engineering streak.

Still, one can concede Abbott’s flaws and broadly support his political agenda. At the heart of his appeal is his brand of conservatism, something both his friends and foes misunderstand. Abbott does not subscribe to the left-liberal consensus, which explains why the well-educated folk of inner-city Sydney and Melbourne are full of scorn. But neither does he cleave as faithfully to the conservative “movement” as do many American conservatives. Nor could he genuinely be described as “right-wing” in any crude ideological sense. Such terms and labels are inappropriate ways of properly understanding the true nature of conservatism.

Conservatives, traditionally speaking, are essentially antidoctrinaire and opposed to programmatic laundry lists. Like Tories of old, and unlike Tea Partiers today, they prefer flexibility and adaptability to rigid consistency and purity of dogma. As Samuel Huntington observed in an important article in the American Political Science Review in 1957, the antithesis of conservatism is not simply left-liberalism or even socialism. It is radicalism, which is best defined in terms of one’s attitude toward change. For conservatives, temperament should always trump ideology, and the single best test of temperament is a person’s attitude toward change. Although conservatism accepts the need for change, the onus of proof is always on those who advocate for it.

Abbott more or less represents this tradition. He is temperamentally conservative, someone who likes to do things in settled and familiar ways, and he recognizes that radical change is fraught with the danger of unintended consequences. This is a man at ease quoting Michael Oakeshott, Roger Scruton and Paul Johnson, distinguished conservative writers who champion incremental and consensual change over the large and divisive variety.

That is why Abbott defends the monarchy and opposes a republic. His critics try to paint him as a romantic loyalist who is sentimentally attached to the queen and “Mother Country” (where he was born in 1957). But his position is based on a belief that a republican form of government could amount to radical tinkering with the constitutional arrangements that have undergirded the nation’s stability and prosperity since 1901, when Britain granted formal independence to its colony.

Abbott’s conservatism also explains why he is skeptical about alarmist claims of global warming: he has proposed to abolish the previous government’s carbon tax on the grounds of its expense and uselessness. And it is why Abbott is wary of unfettered free markets and lax foreign ownership laws, lest they create a radical backlash from the losers involved in the process of what Joseph Schumpeter called “creative destruction.”

On the other hand, many American conservatives, especially Tea Partiers, fail the temperament test abysmally. They do well on the doctrinal purity scale. They impatiently lust after radical change and upheaval. And they yearn to be consistent in the application of a fixed doctrine. But they attach little or no value to continuity. Nor do they place much emphasis on the role of changing circumstances and conditions in the course of devising policy. Given the intransigence congressional Republicans and presidential primary candidates have displayed in recent years, and their utterly unconservative refusal to ground ideological ambitions in political realities, there is much to be said for Abbott’s mind-set.

What also distinguishes the Australian prime minister from his conservative brethren across the Pacific is his belief that a center-right party should represent a big tent, one capable of embracing a variety of beliefs and implementing a range of policies depending on the circumstances and conditions. He is fond of quoting a 1980 address by Liberal prime minister Malcolm Fraser on the natural compatibility between liberalism, understood in nineteenth-century terms, and conservatism, understood in eighteenth-century terms. (As it happens, the speech was written by Owen Harries, a fellow Australian conservative who became founding coeditor of The National Interest in 1985.)