A Reagan Doctrine for Iran? 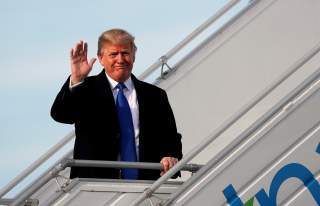 After nearly forty years of repression, corruption, and tyranny, tens of thousands of Iranians took to the streets in protest of the vicious mullah regime. As with its predecessor, the Green Movement—or Persian Spring—in 2009, frustration with economic stagnation, high unemployment and corruption have generated the current revolt against the gangster clerics in Tehran.

The mullahs portray support for the protesters from abroad as undermining the legitimacy of the protests. That is self-serving nonsense. What we are witnessing is a spontaneous outpouring of grassroots dissatisfaction with a corrupt Iranian regime.

When I wrote speeches for President Ronald Reagan about anti-Soviet dissidents, we knew the risks taken by those who stood up to tyranny behind the Iron Curtain. But they needed to understand they were not alone, and that the outside world knew of their bravery in the face of possible imprisonment and even death.

As the protests erupted, President Trump tweeted, “Iranian govt should respect their people’s rights, including the right to express themselves. The World is watching.” The Trump administration has been forthright in calling the world’s attention to the crimes of the mullah regime: Last month, the United States’ Permanent Representative to the United Nations, Nikki Haley, denounced Iran’s arming of Houthi rebels in Yemen. Secretary of State Rex Tillerson recently declared that the Trump administration “supports the aspirations of the protestors, including calls for a transition of government.”

Despite concerns about personnel and programming matters, the Voice of America’s Persian News Network and Radio Farda operate as key tools in making sure the Iranian people know about America’s support for them at the highest levels of our government.

The Iranian people know the full disgrace of the billions of dollars President Barack Obama gave to the mullahs in conjunction with the 2015 nuclear deal. Now, supposedly, Iran’s nuclear program is entirely peaceful. Instead, this money was used to fund regional violence and terror rather than to improve Iranian life.

Just as the dissidents behind the Iron Curtain knew Ronald Reagan was a true ally and sincere believer in human rights, so in Iran today the Iranian people sense that President Trump is on their side and that President Obama was on the side of the mullahs.

The Iranian people are also aware that President Trump has strengthened ties with India while downgrading America’s relations with Pakistan. It just might be that people now sense a real leader, transparent and reliable, occupies the Oval Office—a revival of Ronald Reagan’s firm Cold War presence.

The Reagan administration faced its own set of challenges from Iran: the Iranian-backed attack the U.S. embassy in Beirut in April, 1983; the march 1984 kidnapping and murder of Beirut embassy Political Officer William Buckley; the October 1983 attack against the Marine barracks in Lebanon in 1983, killing 241 Americans; the June 1985 hijacking of TWA 847 and the subsequent murder of U.S. sailor Robert Stethem; the capture, torture, and murder of Lt. Col. William R. Higgins in 1988; and the infamous Iran-Contra scandals. These tragic and frustrating episodes have resulted in a reluctance to deal with Iran head-on.

That appears to be changing. We need a Reagan Doctrine for Iran—notably supporting the Kurds, Azeris, Baluchis, Arabs, and anti-regime Persians to form new systems based on self-determination or a more decentralized federal political structure.

The future of Iran remains in the hands of the Iranian people, but the example of the Democratic Federation of Northern Syria and the inclusive Syrian Democratic Councils, none of them bound by ethnicity or religion, may be worth considering.

As we come closer to the deadline for President Trump to decide whether to reimpose sanctions on Iranian oil—which will effectively pull the United States out of the pact—the protests in Iran may be having a profound effect on basic U.S. policy.

When President Trump decided not to certify the nuclear deal in October, many of our friends and allies were pressuring us to stay the course. Now the situation is reversed: We call on them to support the Iranian people and to dissuade the mullahs from using more violence against their own citizens.

The Iranian regime could well succeed in strangling this uprising, but they will never be able to choke the desire of the Iranian people for a more just and free society. This time, thank God, the United States stands with the brave protesters in Iran.

We have President Trump personally making that crystal clear.