Reagan Was Right: Big Government Corrupts the Military Too 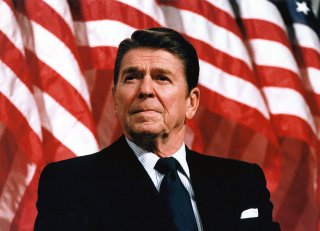 Roger Zakheim, director of the Ronald Reagan Institute in Washington, DC, which promotes the former president’s legacy, argued in a recent Wall Street Journal column that the United States needs to increase its annual military spending by at least 30 percent—from approximately 3.7 percent of gross domestic product (GDP) to between 5 and 6 percent.

Zakheim, who also serves on the board of the National Defense Industrial Association (NDIA), said the increase is needed to achieve a “margin of safety” for Americans against the growing threats from China and Russia.

In Zakheim’s telling, U.S. political leaders have made “common cause with the detente-pushing realists” while neglecting the investments necessary to modernize America’s armed forces. Unfortunately, this misses an important nuance. It is true that President Ronald Reagan was a proponent of strong defense, what he termed “peace through strength.” At the same time, he was a skeptic of big government and an opponent of top-down government planning.

The U.S. military sector—the same defense industrial complex the NDIA represents—is the poster child of both. It is a massive government enterprise grounded in top-down state planning by a small group of political elites. The Pentagon is the world’s largest employer. The military-industrial sector is characterized by entanglements between government and private firms, with the latter earning large profits from war preparation and war-making.

These entanglements are a hallmark of political capitalism—a system where political decision-making influences private decision-making and where private parties influence politics to further their interests, usually at the expense of taxpayers. The same you-scratch-my-back-I’ll-scratch-yours exists in other areas where the government is heavily involved as well, such as education and infrastructure, where private firms and other special interests spend millions of dollars attempting to influence policy for their own benefit in the name of some “common good.”

Craig Whitlock, in his recent book, The Afghanistan Papers, revealed the bipartisan systematic waste, fraud, and deception behind the U.S. government’s two-decade presence in Afghanistan. Why would we expect additional increases in military spending to suddenly be used more effectively and efficiently? This isn’t a matter of “resources” or “resolve,” but of the way in which big government incentivizes excess and dysfunction.

This wouldn’t surprise Reagan. In a 1981 speech, he compared big government to a baby, noting that “It is an alimentary canal with an appetite at one end and no sense of responsibility at the other.” This logic applies just as much, if not more so, to the Pentagon as it does to any other government agency or program.

The effects of Big Military are more than economic. As Reagan put it in his farewell address, “There’s a clear cause and effect here that is as neat and predictable as a law of physics: As government expands, liberty contracts.”

Expansion of the military certainly can be used to defend freedoms. But it also can be used—deliberately or not—to undermine and erode domestic liberties. Recent examples from the war on terror include increased surveillance, the erosion of data privacy, the militarization of police, the targeting of certain groups, and civil asset forfeiture.

A powerful military requires a powerful state. This includes granting significant discretionary power to the members of the political elite who operate outside of constitutional constraints.

What about safety? It is important to remember that there are multiple margins of safety. One is safety against foreign threats. Another is safety against the threats to individual freedom posed by an overreaching and expansive domestic security state.

If Reagan’s “law” is correct—that “as government expands, liberty contracts”—then further expanding Big Military can’t help but lead to additional reductions in our freedoms, all in the name of theoretically protecting us against potential foreign threats. This is a bad deal for both safety and liberty.

Christopher J. Coyne, Ph.D., is a senior fellow at the Independent Institute in Oakland, Calif., and professor of economics at George Mason University. He is the author of the forthcoming book, In Search of Monsters to Destroy: The Folly of American Empire and the Paths to Peace, due out in December.