The Real Deal? How to Make a Great U.S.-India Trade Agreement In both the Trump and the Modi administrations, factions are pushing to ink a U.S.-India trade deal before November’s U.S. election. Given the Trump administration’s hardline China stance (exacerbated by the pandemic and evolving trade war), India’s border conflict with China, and President Trump’s friendship with Prime Minister Modi, many expect the two nations to emerge as stronger trade allies.

Each country could use plenty of what the other has to offer, but in order to get it, each will have to give something up in good faith.

From a U.S. perspective, India and China have certain important characteristics in common. Both are nuclear powers with more than 1.3 billion citizens. Both are members of the World Trade Organization, but neither is currently a U.S. free-trade agreement partner. Both are a major source of immigrants, temporary workers, and students, at least before the Trump administration’s coronavirus-inspired clampdown. But the similarities soon give way to major differences.

India is a fellow democracy, China a one-party authoritarian state and geopolitical rival. Despite China’s closed political system, its economy is more open to trade and foreign investment than India’s, and it’s much more deeply embedded in global supply chains. In terms of economic weight, China’s economy was $14.3 trillion in 2019 (in current U.S. dollars) compared to India’s much smaller $2.9 trillion, according to the World Bank. 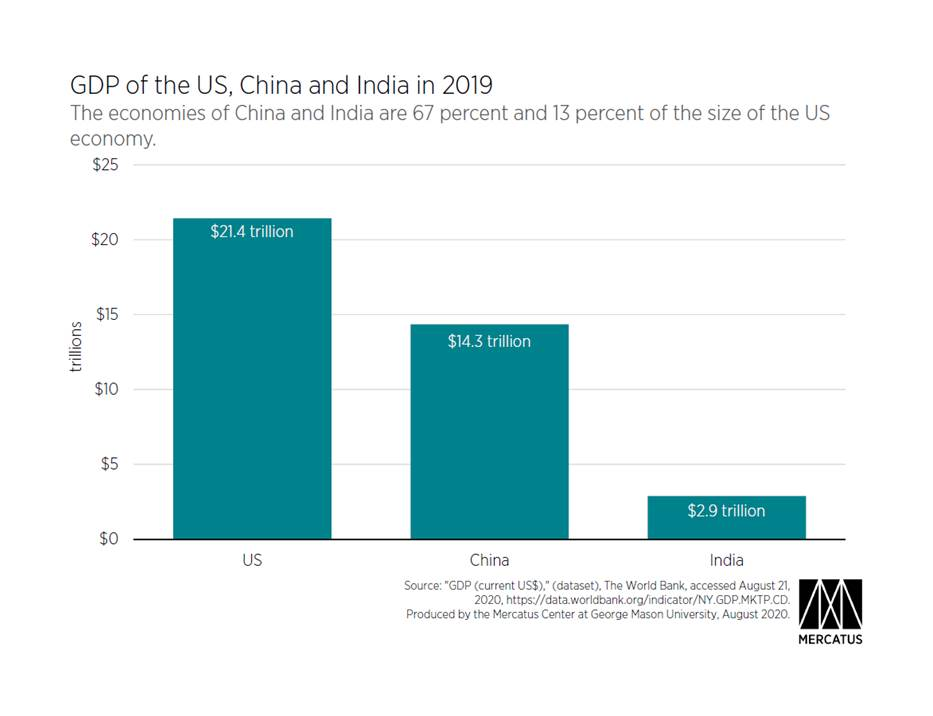 As a result, the people of the United States do far more trade with China than India. In fact, U.S. two-way trade with China in goods and services last year was $636.8 billion, more than four times the $146.1 billion in U.S.-India trade. It’s the same story with foreign direct investment. In 2017, U.S. companies owned $447 billion in assets in China through their majority-owned affiliates, more than twice the $165 billion they owned in India. U.S. affiliates in China sold $375 billion in goods and services that year, almost four times the $94 billion sold in India. 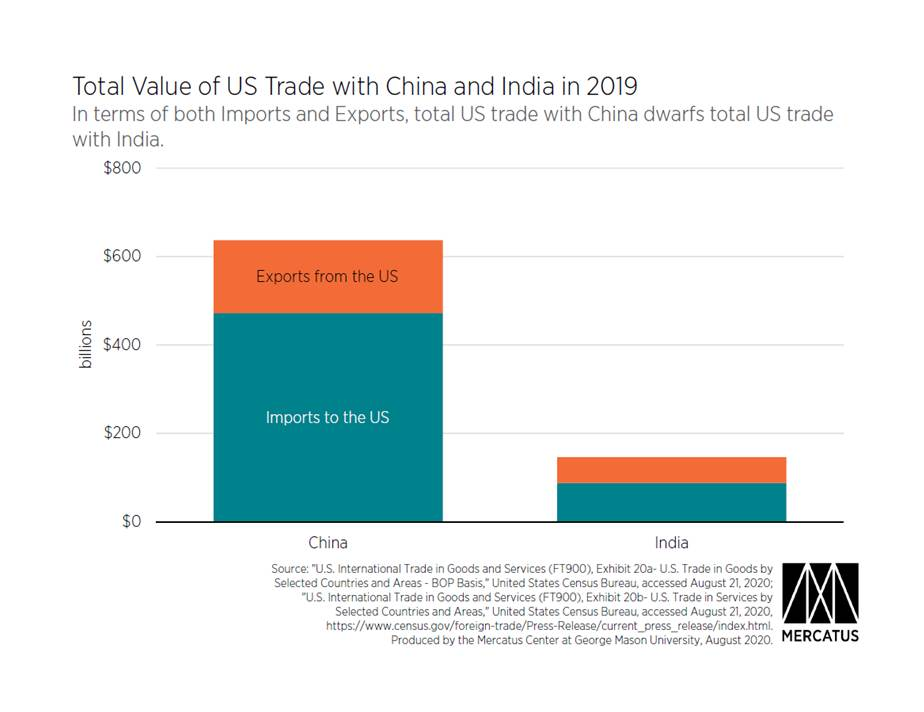 India, though a smaller trading partner for both countries, does an overwhelming share of its own trade with the United States and China. China has the largest share of India’s overall imports. About half of all electronics imports, and two-thirds of the materials India needs to make drugs for its generic pharmaceuticals sector, come from China. The United States, on the other hand, is India’s largest export market, mainly because of IT services, making the American relationship very valuable in India’s services-driven trade strategy.

India’s commercial relationship with the United States looms even larger because of mounting tension on its border with China and its boycott of Chinese goods. And U.S.-India ties are still impressive and growing. The United States imports $15 billion a year from India in telecommunications, computer, and information services, compared to less than $1 billion from China. This so-called “outsourcing” of IT services allows U.S.-based companies to operate more efficiently and to compete more effectively in global markets.

U.S.-India goods trade is underdeveloped, mostly because of India’s smaller industrial sector and its high import tariffs. The two largest categories of imports Americans buy from India are pharmaceutical preparations and gem diamonds. Leading U.S. exports to India are gem diamonds, crude oil, non-monetary gold, and civilian aircraft. Despite its huge population, India is not a major market for U.S. agricultural products. 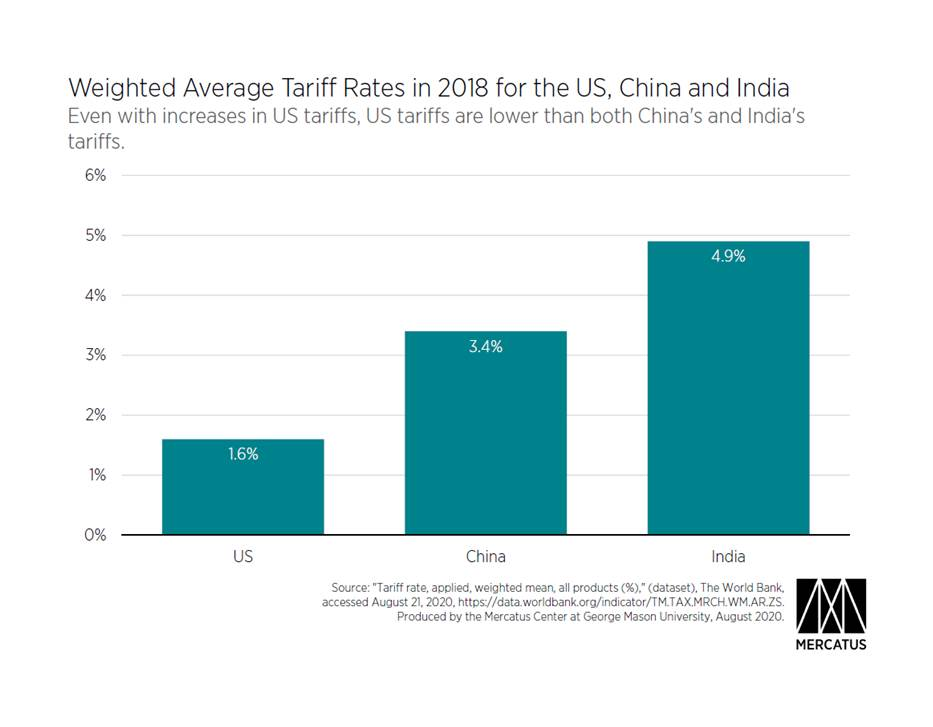 India also has the potential to be a big player for large U.S. tech companies, which compete not just within markets, but for dominating entire markets. China’s firewall system blocks most of them, unless they get special permission from the government or partner with a Chinese firm. India, with its open system and dirt-cheap cellular data provision, has the next-largest number of eyeballs and the maximum potential for growth.

India recently banned China’s TikTok from its largest overseas market, the first casualty of the India-China border conflict. But for Netflix, Amazon, Facebook, and other large American companies, India’s market is the next horizon. For that to happen, there is much to negotiate and resolve between India and the United States, from intellectual property to data privacy to free speech regulation.

The Trump administration, however, has focused on headlines instead of forming agreements to increase the size of trade in strategic sectors. President Trump has repeatedly demanded that India cut tariffs on foreign motorcycles from the current rate of 50% because this hurts American firms like Harley Davidson. But hardly anyone in India pays that rate because the firm has a local assembling plant in India, where motorcycles are made with parts produced in Wisconsin.

Any trade agreement between the United States and India must address high tariffs and non-tariff barriers imposed by the Indian government. It must also tackle rules on foreign investment that make it more difficult for U.S. companies to invest profitably in India compared to China. India must also simplify its land acquisition rules, complex labor regulation, and Goods and Services Taxation system—all major barriers to the ease of foreign firms setting up mutually beneficial businesses.

For its part, the United States must expand export opportunities for India for its most competitive sectors, such as IT services and pharmaceutical products. The U.S. should also repeal the per-country quotas for employment based green-cards, which impose absurdly long waiting times for Indian professionals otherwise eligible for legal permanent residency.

If the United States is serious about working with its allies to contain China and expand its own influence in East and South Asia, a serious commercial agreement with India would advance both objectives. But the agreement must be more about substance than symbolism.