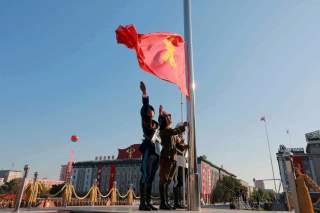 This Friday, North Korean leader Kim Jong-un will meet South Korean president Moon Jae-in. In May or June, he may meet U.S. President Trump. The hype around these meetings is growing. Just last week, North Korea’s announcement that it would suspend nuclear and missile tests sparked another round of hope that real change on the peninsula is near.

Expectations are rising, and without being recalcitrantly skeptical, things look better than they have in years. Rhetorically at least, North Korea has dropped its objections to the U.S.-South Korean alliance, the presence of U.S. forces, and even joint U.S.-South Korean military exercises. And now, it is throwing out a testing halt. Obviously all this must be verified, but for now this is movement in the right direction.

Importantly though, these are all what we might call “negative” concessions. They are, in North Korean eyes, certainly concessions. These are things they have insisted on as their right to act on or complain about for years. But critically, these concessions are provocative actions against the allies; they are not actually anything of direct, material value to the North, such as a shutdown of one its gulags or the entrance of inspectors into its nuclear sites.

Similarly, North Korea and South Korea have suggested other pseudo-concessions in the last few months as a part of any deal: family reunions of relations divided by separation and war, a reopening of the Kaesong Industrial Zone, and tours to Mt. Diamond, inter-Korean rail and other joint-economic projects.

These schemes may indeed be part of any deal in the summits, but it is critical to note that none of them actually impose costs on North Korea—the mark a genuine concession to solicit counter-concessions. And the economic projects will in fact materially benefit North Korea.

Giving up objections to the United States in South Korea, or provocations along the border, are hardly concessions at all. Pyongyang is surrendering the “right” to harass us, scarcely a serious give-back. Giving up testing is similarly hardly a concession. That is not a rollback of extent capabilities, only a vague promise not to generate even more destabilizing weapons.

Family reunions are probably the thorniest North Korean pseudo-concession. It is indeed of great moral value to us. The democracies will treat these as a highly desirable concession and likely give something to attain them. We care more about the North Korean people than the Kim family does, so Pyongyang is cruelly willing to exploit its people’s emotional happiness as card in negotiations. We have little choice but to play that unfortunate game. And indeed we should. These reunions are of great moral significance, and we should deal for them.

But they are also no real concession by the North. They are costless. The North picks up the participants, drives them on a bus to a secluded location, and allows them to meet for just a few hours. South Korean participants have described meeting family members who insistently spouted Kimist ideology throughout the meetings.

Instead, the real test is if the North will actually give up something of positive value to it. Will it send what social scientists call “costly signals” to demonstrate its commitment to genuine negotiation? So far it has not. So far, all of the North’s proposals have been light on real costs to the regime. Indeed, this is why I have been skeptical of the talks all year. Despite all the nice atmospherics so far—the Olympics, the musical troupes, the hype—North Korea has yet to float any proposal that would meaningfully impair it. Yet the positive concessions we are demanding are fairly obvious. So it is a bit unnerving that four months into this peace offensive, the North has still not given us anything real to consider counter-conceding for.

The most obvious positive, costly concession would be denuclearization. It is widely expected that the North will not budge on that. In lieu of CVID—complete, verifiable, irreversible disarmament—the North could put related nuclear and missile items on the table.

A stockpile inventory is one possible start: just how much nuclear and fissile material does North Korea have? How do they keep track of it? Can we be sure they have not proliferated? A missile count would be a similarly valuable concession for which we might bargain. At the height of testing in the last few years, North Korea appeared to have hundreds of missiles and was sophisticated enough to produce them domestically. It also appeared to be close to solid fuel rocketry, shortening its launch time.

Nuclear safety is another possible, nuclear-related concession. There is anxiety that North Korea’s program, like so much of North Korea’s economy, is badly administered and maintained. Its testing site at Mt. Mantap had an implosion last year that killed two hundred people. This is likely why Kim “conceded” closing that test-site last week: avoiding a North Korean Chernobyl is another pseudo-concession which is not actually costly to the North.

Other concessions are also possible—such as human-rights improvements, shrinking the gulags, normalizing small-scale entrepreneurial capitalism in the North. But these genuine, positive concessions must ultimately be at the heart of the summits. Moon and Trump must not get flim-flammed into reading cost-less faux concessions as the real thing.

Robert Kelly is a professor of international relations in the Department of Political Science at Pusan National University. More of his writing can be found at his website. He tweets at @Robert_E_Kelly.