Is the Real Threat to Trump from Congress? 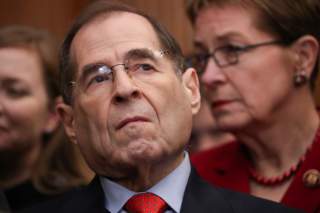 This past Monday the House Judiciary Committee, chaired by Congressman Jerrold Nadler (D-NY), launched a new investigative probe. The purpose of the probe is to explore possible wrongdoing by President Donald Trump, including obstruction of justice, misuse of office for personal gain, and abuses of power. It began by requesting documentary evidence from eighty-one separate individuals and organizations, ranging from President Trump’s children, to former campaign officials, to Julian Assange himself.

This new, sweeping investigation is taking the spotlight from Special Counsel Robert Mueller’s investigation launched in May 2017. Begun after President Trump dismissed FBI Director James Comey, the purpose of the special counsel was to scrutinize allegations of collusion between the Trump campaign and the Russian government in their suspected interference in the 2016 U.S. presidential election.

“There are two competing theories about the Mueller probe,” explains Jim Antle, editor of The American Conservative. “One is that the charges he has filed against people in President Trump's orbit reflect what he can prove and he never charges anyone with anything directly related to a conspiracy with Russia to influence the presidential election—not even George Papadopoulos, who got just 14 days in jail, or Roger Stone, who is portrayed as a link to WikiLeaks but is only charged with process crimes. Thus, as the president says, ‘No collusion!’ The second theory is that these charges represent a small fraction of what Mueller knows and he is gradually building toward making the case for collusion, getting closer and closer to Trump's door.”

The likelihood of this second theory, that Mueller is going to come in at the end with a surprise knockout, is increasingly improbable. “I think the facts are obvious when it comes to the Mueller investigation. Its core mandate is to look into whether there was coordination between the Trump campaign and Russia, and Mueller has made a grand total of zero allegations of any kind of conspiracy between anybody in the Trump campaign or any American and Russia,” said Aaron Maté, a contributor to The Nation.

“The joke is if Mueller’s investigation was a child it’d be talking and starting to walk at this point,” said Peter Van Buren, a former State Department official and author of several books. “If you take Mueller’s work and you tag on that the FBI was looking into all of this almost eight to nine months before Mueller even came on the job, you’re heading into three years of this. And if the full force, including all the technical means, of the U.S. government, hasn’t been able to undercover whatever collusion is, you have to take a pretty good guess that it’s not there.”

“Perhaps Mr. Mueller will report new facts that are damning. But it’s notable that Mr. Nadler and other Democrats are now saying they will expand their probes beyond Mr. Mueller’s ambit. They seem to be expecting a factual and political disappointment,” voiced a Wall Street Journal editorial.

“Mueller's report will almost certainly disappoint you, and it's not his fault. It's your fault for buying into Trump's false narrative that it is Mueller's' job to prove 'collusion,’ a nearly impossible bar for any prosecutor to clear,” tweeted CNN legal analyst Renato Mariotti.

“So, pundits like Mariotti have been telling their audiences for two years that there is evidence of collusion…but now they’re actually blaming not themselves, they’re blaming their audiences for believing that Mueller could possibly pass the legal threshold for proving it,” Maté told TNI. “So, I think now with people realizing that actually, judgment day is approaching and they’re going to be held accountable for two years of raising expectations, I think that’s why right now we’re seeing this attempt to change the conversation and tamper down expectations that they themselves have been fueling for two years.”

Van Buren agrees, saying you can almost hear the pivot as Democrats and media organizations change their narrative. “If you were to do a statistical analysis for example of Rachel Maddow, you would note that she has turned from Russiagate to corruption and has begun to downplay all of these things. So yes, it’s happening in real time in front of us, they’re preparing us that there will be no smoking gun and they’re setting up what we’re going to do for the next two years which is going to be talk about corruption,” he told TNI.

Perceiving the failure of the Mueller investigation on the horizon, the House Judiciary’s probe will be looking elsewhere. “Representative Jerry Nadler, who has also been a huge Russiagate promoter, now says that this investigation goes far beyond collusion,” said Maté. If the Democrats can’t impeach Trump for treason, then they’ll have to find themselves “high crimes and misdemeanors.”

Congressman Doug Collins (R-GA), the ranking member on the House Judiciary Committee, told Chairman Nadler in an open letter that “[y]our investigation is an abuse of Congress’s oversight power. Such an investigation serves only one of two possible purposes: either you intend to impeach the president, for alleged crimes that have yet to be discovered, or you intend to embarrass him.”

While the motivations for both the Mueller and Nadler investigations might be the same, an early and ignominious close to the Trump presidency, the perception of how they carry themselves is the inverse. “A guy like Mueller, acting as special prosecutor, was supposed to be kind of the gold standard of doing this. The idea was that we’re going to have a real adult do this dispassionately so that if in the end, we hang Trump, everybody is going to have to shake their head and say, ‘He kind of deserved it, didn’t he?’” quipped Van Buren.

On the other hand, Van Buren said, the new Democratic majority has no such pretense for political independence. “Everything the House is up to, and that’s the Oversight Committee, the Judiciary, and whatever they come up with next, is in fact overtly partisan. They’re not even pretending it isn’t. It’s designed not to lead necessarily to an objective search for facts, which could exonerate someone or could implicate someone, it is designed to find something that can be used to beat up on Trump, possibly to make him look bad for the election, if possible, enough to rise to impeachment.”

There is also a diametric difference in how both investigations function. Special Counsel Mueller, as an official under the Justice Department’s jurisdiction, must follow certain procedures when indicting someone and must reach certain standards of evidence. “The House has no such restrictions,” warned Van Buren. “They’re welcome to slander, to blow things out of proportion, to cherry pick through, and they face no kind of rules of evidence.”

Maté worried that the Democrats will waste their political capital on grandstanding and end up performing a retread of the Mueller investigation with the same lack of results. “And the reason why I’m concerned about that here is because Nadler is sort of going over the same ground, at least initially, that Mueller has already covered and also the SDNY [United States District Court for the Southern District of New York]. If you look at the documents he’s asked for…those witnesses who have received document requests are basically getting asked for the same documents they’ve already given over to Mueller and SDNY.”

Conservative commentator Pat Buchanan often mentions that unlike the investigations into President Trump, Watergate at least started with a break-in. “Here we started with a supposition that there’s no possible way Donald Trump could have fairly beat Hillary. Then there was a search for an unfair way that has led us down all these different places,” said Van Buren.

For his part, Antle is skeptical that the House Judiciary probe will be any more successful than Robert Mueller in removing the embattled President. “If you look closely enough at Trump World, you are going to find some unsavory things and House Democrats can try to impeach the president over them if they want to. The real question is whether they discover anything that will sway the twenty Republican senators they actually need to vote to remove Trump from office for this gambit to be successful. Mueller has a better chance of doing that than partisan Democrats in the House.”