Realism Resurgent: The Rise of the Quincy Institute 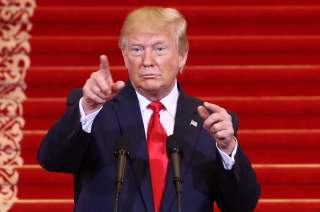 There’s a new foreign policy action group in Donald Trump’s Washington. The Quincy Institute—founded by Boston University’s Andrew J. Bacevich, the Carnegie Endowment’s Suzanne DiMaggio, Columbia University’s Stephen Wertheim, Georgetown University’s Trita Parsi and journalist Eli Clifton — seeks to act as the whip hand for the forces arrayed in Washington seeking to change the foreign policy status quo. On Twitter, the leading neocon William Kristol has already denounced the emergence of the institute as heralding a return to the isolationism of the 1920s and 1930s.

But what is truly weakening America’s power and prestige in the world? Over the last thirty years, “America’s standing as a global leader has declined,” writes Bacevich in the Los Angeles Times, in his inaugural column with the institute. “It turns out in practice that credibility is less a function of using force than of demonstrating prudence.”

Much has been made of the group’s funding—groundbreaking pledges from both the conservative Charles Koch Institute and liberal billionaire George Soros. A number of its members, including Wertheim, can safely be described as left-wing realists. Bacevich has long been a conservative who became disaffected with the Republican party’s hawkish wing. His writings have decried what he views as the ostentatious new American militarism. But those familiar with the group’s finances and early approach say this outfit, unlike many traditional organizations in Washington, will not be inveterately hostile to the administration.

“I will work with anyone,” for the cause of foreign policy realism and a more secure world, one of the group’s co-founders told me, noting that some of the most prominent voices, philosophically aligned officials in the Trump White House, such as Senior Counselor Stephen Miller, are also some of the most controversial in the popular press. When it comes to Team Trump, however, Miller is something of an aberration, at least for now.

Proof positive: Trump recently called off airstrikes on Iran against the advice of much of his national security team. The president has sought informal counsel, such as from Fox News’ Tucker Carlson, to help craft his policy, finding his own cabinet officials lacking. That’s where Quincy could help come in, along with other think tanks. Today, for example, President Trump twice tweeted out his gratitude to the Center for the National Interest’s Senior Director for Korean Studies, Harry J. Kazianis, for praising his audacious approach to North Korea.

“Trump may come to realize that he can count on this diverse coalition, including the Quincy Institute, to back his moves to end endless wars,” a person closely familiar with the institute’s strategy told me. Bacevich, a conservative who’s backed Trump on several measures—such as on the president’s prudent approach to North Korea—is “well-positioned to help Quincy find its unique voice,” this person told me.

This could mean trouble for many of the policy shops that have dominated the early administration. The hawkish Foundation for the Defense of Democracies, the Security Studies Group and the Center for Security Policy—as well as establishment pillars the Heritage Foundation, the Hudson Institute and the Washington Institute for Near East Policy—all of whom have in varying ways sought to influence the administration, which has delivered a smorgasbord of victories to Iran hawks and champions of Sunni autocracy. Some of these outfits were quick to criticize Trump for his Korea moves this past Sunday, demonstrating that they remain frozen in a Cold War mindset.

Quincy will have a different approach, in line with Trump world stars such as Carlson and Rep. Matt Gaetz, a leading critic of the Yemen war. But the outfit will also be comrades in arms with those on the Hill who would seize Trump’s war powers where he’s gone astray, such as in Yemen. The goal, says one insider, is to “provide intellectual ammunition to him and those on the Hill on the left and right who want to push back against the primacist elite that dominates Washington today."

If Trump goes down in 2020, the group will likely pivot. A Democratic administration would likely confront Russia, and roll back progress on the Korean Peninsula. One leading Democrat, Sen. Cory Booker, has refused to commit to returning Barack Obama’s nuclear arrangement with Iran. Another candidate, Rep. Tim Ryan, proposes more decades of warfare in Afghanistan. “In its left-right configuration,” says National Interest editor Jacob Heilbrunn, “the new institute may be able to help make a fresh contribution to the mounting debate in Washington and elsewhere over America’s purpose.”

Curt Mills is the foreign affairs reporter at the National Interest, where he covers the State Department, National Security Council and the Trump Presidency.