The Realist Case for a Korean Peace Treaty 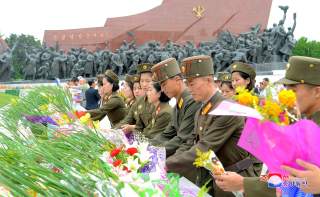 In his introduction to Leviathan, the great English political theorist Thomas Hobbes wrote that anyone seeking to understand politics should focus on “the similitude of Passions, which are the same in all men, desire, fear, hope, etc.; not on the similitude of the objects of the Passions.” Those specific objects greatly vary, are “easie to be kept from our knowledge,” and can never be definitely ascertained. We cannot know based on observation whether a given person (or dictator) values economic wealth or diplomatic accolades more than powerful weapons.

However, the primal passions themselves, especially the paradigmatic fear of violent death, we can know simply by looking within. Paradoxically, then, the one thing that a realist like Hobbes is certain about is that everyone has the equal capacity to be made fearful and anxious by a dangerously uncertain world—and that similarity is precisely why individuals (might) understand and cooperate with each other. So too for states.

It’s not necessary to delve into high theory in order to recognize this point. When residents of Honolulu had their mornings interrupted by warnings of an incoming missile last January, they were not interested in hearing “constructivist” accounts of how, with time, North Korea might be socialized into a peaceful member of international society. Nor did they care whether its decades of being outcast from liberal trade and governance structures would, eventually, pressure it to adhere to UN nuclear arms resolutions and join the “liberal international order.” What they wanted was just assurance that they would not be incinerated.

Moments of existential doubt, whether for an individual or for a state, prompt the pursuit of certainty as to these sorts of baseline matters. This is obvious enough to us as individuals when faced with the threat of death from the skies. It should be equally obvious that these same sentiments are shared by the North Korean elite, and its ruler Kim Jong-un. That, as much as anything, is a promising basis to find a modus vivendi between North Korea and the United States.

Currently, following unprecedented rapprochement during President Trump’s meeting with Kim Jong-un in Singapore, the agreed process of “denuclearizing the Korean Peninsula” has run into a new set of accusations and recriminations. Trump administration officials have pointed to apparent ongoing construction of nuclear facilities and ICBMs as signs of bad faith, while Pyongyang has noted its dissatisfaction with the “gangster mind-set” of America’s unilateral demands.

Officials familiar with North Korea’s positions on the ongoing negotiations have stated that Pyongyang is demanding the “bold move” of U.S. agreement to a peace treaty, before proceeding further with denuclearization. Only if there is a formal end to the Korean War, and formal recognition by the United States of North Korea as a sovereign state, would the process continue.

As mentioned, meanwhile, the majority view within the U.S. foreign policy and national security establishments now seems to be that North Korea has “played” Trump and was never serious about denuclearization. Many argue that not only should any thought of a peace treaty be rejected until the regime has given up its nuclear weapons, even Trump’s initial overtures were a “display of weakness”—we should only meet with those who come ready to kneel.

The implication of such comments is that there should be a return to the policies of ostracizing North Korea, sanctioning its people into starvation, and intimidating it with the threat of regime change. This, somehow, is imagined to be a way of making it more friendly and compliant, rather than still more hostile and desperate.

Following the disastrous examples of Iraq and Libya, there are few today who directly argue for imposing regime change in Pyongyang. But that remains the ultimate horizon of mainstream thinking; the only “credible” alternative to an arms elimination program on American terms. What is impossible for many to imagine is that North Korea might be serious about the necessity of a peace treaty as its precondition for denuclearization—that it is motivated not by confidence that it can deceive and embarrass the United States, but rather by genuine fear that its lack of recognition and state of war with the United States may result in yet another American project of regime change. A peace treaty would, at minimum, establish that neither Trump nor a future president could legally order military action against Pyongyang without Congressional approval. By itself that may not be enough to prevent a war; it may, though, be enough to transform a relationship.

The founder of modern realist international relations theory, Hans Morgenthau, was quite attentive to existential fear as a motivator of state behavior. He wrote that politics as such, and the “spirit of domination” that it entails of competition among individuals or nations, only comes into play after one’s “survival is secured.” Fundamental questions (such as whether to build nuclear weapons or to abandon them) are decided not by rational calculations of economic interest, but rather by the will to survive (and then by the will to power).

For Morgenthau, those with overly idealized models of state behavior who ignore these basic truths about human motivation are treating nations “not as living historic entities with all their complexities but as rational abstractions, after the model of ‘economic man’, playing games of military and diplomatic chess according to a rational calculus that exists nowhere but in the theoretician’s mind.” Despite what liberal internationalists have claimed, we cannot count on states rationally cooperating, but we can count on them being, first, fearful for their survival and, second, ambitious to be perceived as great (according to their own idiosyncratic metrics).

If North Korea’s ruling class can only be convinced of their existential safety by a peace treaty, then that is a precondition for any lasting and verifiable denuclearization process. Given that the regime has quite reasonably cited examples such as the Libyan intervention to explain its reluctance for disarmament, it seems obvious that it will not be convinced to pursue “greatness” via economic development (as Trump has recommended) until its basic safety is guaranteed.

A peace treaty with the United States, already long overdue, would be the basic existential guarantee that North Korea needs in order to begin turning into a “normal country”—i.e. one that is motivated on a day-to-day basis by normal greed and self-aggrandizement, not by a desperate struggle to survive amidst a (perceived) life-or-death state of exception. Much of the bizarre and militaristic character of the regime, though partially attributable to its dynasty of paranoid dictators, can also be ascribed to the threats and isolation that have made invasion and regime change a continuously perceived threat for decades.

How much of the hostility between the United States and North Korea is due solely to the fact that they have no mutually acknowledged, formal legal relationship aside from that of belligerents in what will soon be a seventy-year-long war? Given that the regime has been willing to flout the international “rule of law” as to its nuclear weapons development and other activities (from cyber-attacks to assassinations), can it really put so much faith in the legal protection from invasion that states are afforded by UN Charter Article 2?

It’s impossible to say for sure, but gracefully acceding to this request by the North will allow the United States to find out. It is also simply a matter of common sense. Whatever the state of affairs is on the Korean Peninsula, it is not the one that prevailed in 1953. The situation today instead most closely resembles the Cold War dynamic between the United States and the Soviet Union or its satellite states—to which Washington did not insist upon denying state recognition. Is North Korea really different in some fundamental way from those former adversaries, such that its very existence as a state, or the mutual obligation not to initiate a new military conflict, must be denied?

The main argument against recognition of North Korea’s statehood is the view that the administration in Seoul is the rightful government of the entire Korean Peninsula and its people. Yet President Moon, like previous South Korean leaders who favored engagement, has made clear his willingness to accept peaceful state-state relations with the North. Indeed, both Koreas were admitted as states into the United Nations in 1991 as per a South Korean proposal. Meanwhile the North has long argued that the two Koreas should also have some kind of federal system in place recognizing the “greatness” of their shared identity as one Korean people.

This is hardly an extreme or outrageous idea. As two equal sovereign states, North and South Korea could certainly enter into an EU or OAS-style agreement stipulating certain mutual treaty rights and obligations building upon their shared history and national identity, as well as their desire to increase economic and social exchanges. In fact, the wisest course for the United States might be to directly support establishing such an Inter-Korean Union, albeit on terms that would tie economic and diplomatic cooperation to monitored progress in denuclearization. Like a peace treaty ending the Korean War, this would be an initiative that exists, at first, mostly on paper. But it might well help shift thinking in Pyongyang’s elite away from life-or-death struggle and towards the opportunity for future peace and prosperity. They’ve said as much, explicitly. Perhaps it’s time to take them seriously when they tell us their fears, ambitions and uncertainties.