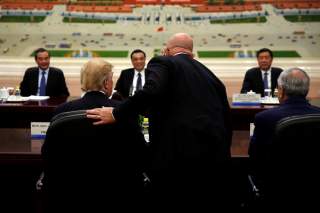 I have long thought that USAID should be split in two. The sections that, quite capably, provide disaster and humanitarian relief should be retained as an independent organization. The rest of the agency should be folded into the State Department. Programs that support democratization and better governance should be run by political officers, while economic assistance should be controlled by embassy economic sections. This would not only improve the strategic coherence of foreign-policy programs, but also inject a needed operational ethos into the Foreign Service.

The U.S. capacity to compete ideologically must be rebuilt from the ground up. The country’s international broadcasting system—which was one of its strongest assets in the Cold War—has lost its way. It has had poor leadership and lacked a clear mission. Also, in relying principally on shortwave radio, it is outdated in the age of the Internet and social media. Washington is being beaten by Russia Today, Al Jazeera and China’s growing media presence.

A great deal of work lies ahead on military modernization. The coming Nuclear Posture Review will set the course for a decade-long and much-needed modernization of America’s strategic weapons and platforms, most of which date from the Cold War. The Army lacks a modernization program worthy of the name. It will have to design a force structure capable of operating simultaneously against peer competitors (such as Russia) and irregular opponents. The Navy faces a future in which precision-guided missiles and counterspace capabilities will pose an increasing threat to the U.S. capacity to project power into the littorals of Eurasia. It has not yet come to terms with that challenge in the design of its future forces. And the Air Force continues to be biased toward short-range, manned fighter aircraft, even as adversaries and technological trends reduce the value of such systems. The good news is that the National Defense Strategy indicates that a comprehensive rethink is on the administration’s agenda.

In the cyber domain, the United States has the greatest capabilities—but also the greatest vulnerabilities. A priority should be developing an approach to secure the critical parts of the .gov and .com worlds to the same extent to which we have secured the .mil domain. Securing the key elements and control systems of the electric grid should be at the very top of the list. This will require new legislation, regulation and innovation, and it is unlikely to take place unless driven from the White House.

Zalmay Khalilzad, a former director of policy planning in the Department of Defense, was the U.S. ambassador to Afghanistan, Iraq and the United Nations. He is the author of a new book, The Envoy: From Kabul to the White House, My Journey Through a Turbulent World, from St. Martin’s Press.