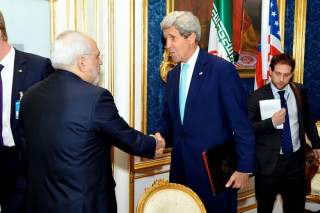 Since the Joint Comprehensive Plan of Action (JCPOA) was announced last week, the Obama administration—echoing previous pledges that nuclear talks with Tehran do not presage a U.S.-Iranian “grand bargain”—has assiduously reaffirmed that progress on the nuclear issue does not signal a wider diplomatic opening.

Such a posture ignores an overwhelming strategic reality:  America’s position in the Middle East is in free fall, and the only way out is to realign U.S. relations with the Islamic Republic of Iran.  Washington must do this as purposefully as it realigned relations with the People’s Republic of China in the 1970s, when it struggled to extricate America from the self-inflicted debacle of the Vietnam War and to renew its diplomatic options, for the Cold War’s last phase and beyond.  By not using nuclear diplomacy as a catalyst for broader, “Nixon to China” rapprochement with Iran, Obama and his team ensure further erosion of America’s standing as a great power, in the Middle East and globally.

U.S. engagement in the Middle East over the past quarter century is a textbook example of what Paul Kennedy famously described as “imperial overstretch”—a great power’s expansion of strategic ambitions and commitments beyond its capacity to sustain them.

In the U.S. case, trying to remake and, ultimately, subordinate the Middle East through military campaigns and other forms of coercive intervention has not just failed; it has been profoundly self-damaging to America’s strategic position.  By seeking to dominate the region—and in the process imposing missions on U.S. armed forces that not even the world’s most powerful military could accomplish, squandering vast human and material resources on a scale that not even the world’s largest economy could sustain, and eviscerating the perceived legitimacy of U.S. purposes for the vast majority of Middle Easterners—America has made itself weaker.

To recover, Washington must embrace a new Middle East strategy—one aimed not at coercive dominance but at a reasonably stable balance of power in which major regional states check one another’s reckless impulses.

Such a strategy requires two things.

First, Washington needs to engage—positively and comprehensively—with all important regional actors.  Second, Washington needs to recalibrate relations with America’s traditional Middle Eastern allies—most notably, Israel and Saudi Arabia.  A robust diplomatic opening to Iran is essential to both these tasks.

Whether American elites like it or not, Iran is an unavoidable power in today’s Middle East.  The Islamic Republic’s influence is due to its revolutionary commitment to independence and its participatory Islamist order (not despite these things).  Its influence is, therefore, rising in arenas across the region—and will continue to do so when and as Middle Eastern Muslims gain greater access to participatory politics.

This prompts increasingly alarmist warnings from Israel, Saudi Arabia, and their mouthpieces that Iranian “proxies” are “gobbling up the Middle East.”  In fact, Tehran has grown its influence by supporting unavoidable constituencies marginalized by unrepresentative power structures.

Iran did not create Shi’a majorities in Iraq and Bahrain, or Lebanon’s Shi’a plurality; it did not invent Yemen’s Zaidi community (the Houthis’ base) or occupied Palestinians.  But Tehran has helped these constituencies organize to press their legitimate grievances—so that virtually any expansion of political participation in these venues empowers Iranian allies.

This approach makes it impossible to circumscribe Iranian influence over time.  America must recognize that influence as an indispensable factor in regional politics. Washington needs positive relations with Tehran not only to fight common foes like the Islamic State, but also to promote genuine regional security.

To these same ends, Washington should look soberly at its allies’ regional impact.  Today, neither Israel nor Saudi Arabia truly represents most of those it governs; neither can endorse more participatory politics in the region.

Likewise, neither can compete with Iran’s capacity to exercise positive political influence and facilitate real conflict resolution in contested regional arenas; on their own, Israel and Saudi Arabia can only make things worse. And, regardless of what segments of America’s political class may perceive, Israel and Saudi Arabia pursue policies harmful to U.S. interests (e.g., Israel’s open-ended occupation of Arab populations and aggressive military posture; Saudi Arabia’s support for violent Sunni jihadis and suppression of moderate Sunni Islamists across the region willing to compete for political power through elections).

To reduce the mounting costs that Israeli and Saudi policies impose on America’s position in the Middle East, Washington needs to reduce its dependence on Israel and Saudi Arabia.  A rising Iran could be very helpful in checking the counterproductive policies of America’s traditional regional allies.

But, instead, Obama and his team are reducing a prospective nuclear deal with Iran to the latest version of a self-deluding but widely held ambition among American elites:  to “contain” the Islamic Republic while playing on what those elites imagine are its internal contradictions, so as to hasten its demise.  America has tried this before in the Middle East—against Saddam’s Iraq, which had vastly inferior sources of legitimacy than the Islamic Republic.  Notwithstanding sanctions that killed over half a million Iraqis (half of them children) over thirteen years, Iraqis did not replace Saddam with figures ready to implement sanctioning powers’ preferred policies.  Unseating Saddam required a U.S.-led invasion that proved a blunder of historic proportions for America.

As it follows this well-trod path to strategic failure, the Obama administration is also doubling down on some of the unhealthiest aspects of America’s traditional regional partnerships.

Following the JCPOA’s announcement, Obama promised to maintain Israel’s “qualitative edge”—Washington-speak for continued U.S. backing for offensive Israeli military actions.  In recent weeks, his administration has acquiesced to the Saudi-instigated capture of a Syrian city by an al-Qa’ida affiliate and is providing intelligence, logistical, and political support for the Saudi-led military campaign in Yemen that has killed hundreds of civilians and is enabling al-Qa’ida affiliates to make territorial gains.  Now Obama wants to convene Saudi Arabia and other Gulf Arab monarchies to deepen collaboration on Middle Eastern “security,” without in any serious way engaging Tehran.

This is folly.  Rather than gamble anew on demonstrably failed policies, America needs to take charge of its own strategic destiny—through full-fledged rapprochement with the Islamic Republic of Iran.

Flynt Leverett and Hillary Mann Leverett are co-authors of Going to Tehran:  Why America Must Accept the Islamic Republic of Iran; both served as Middle East experts in the U.S. government under Presidents George H.W. Bush, Bill Clinton, and George W. Bush.  Flynt is professor of international affairs at Penn State.