Reality Check: China Is Paving a Path Toward the Virtual Future 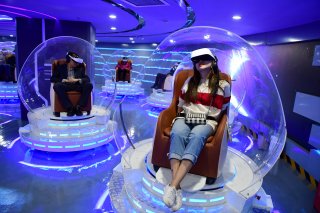 The United States may have unrealized opportunities to accelerate broad benefits from virtual reality (VR) technology. Especially when viewed through the lens of international competition, U.S. efforts to organize and stimulate the VR industry have been relatively small. Moreover, the lack of concentrated support and attention could risk enabling various threats from competing nations.

Although VR has been used extensively in the entertainment industry, it has a broad array of potential applications that span various economic sectors, with relevance to public and national security interests. These applications include law-enforcement training, empathy training, military situation awareness, health treatment, data analysis, counterterrorism, travel, cultural awareness, and more. VR is not only entertaining people; it is ultimately helping save lives. But, as evidenced by relatively low adoption rates, the industry has not yet reached its potential. One reason for this lack of more pervasive use is that many consumers are unfamiliar with the technology and uninformed about the utility it provides outside of the entertainment industry.

The deficiency in stimulating the VR industry is compounded by significant and increasing competition from China. Chinese president Xi Jinping has expressed significant appreciation for the value of VR, noting that “new technologies such as artificial intelligence and virtual reality are developing by leaps and bounds” and that “the combination of the virtual economy and the real economy will bring revolutionary changes to our way of work and way of life.”

The fact that China views VR as a central and significant technology should turn heads in the United States. Americans could easily look to the past to see an example of why it would be a mistake not to foster growth with this technology.

In the late 1990s and the 2000s, analysts missed the fact that the fundamental underpinnings of the technology platforms of companies such as Facebook and Google had the ability to extend past applications limited to entertainment and mild utility, and dramatically reshape the world. Facebook debuted as a somewhat unimportant platform exclusively for college students. As the company began to surpass its competitors, most policy analysts and investors initially ignored it. For all intents and purposes, social media seemed like an entertainment issue that was insignificant outside of the investment paradigm. Google was similar in this regard.  People were certainly interested in how Google was growing financially, but there was minimal concern about its potential impact on social structures and policy.

Like social media, VR could have a substantial impact on the global economy across multiple sectors. Thus, providing leadership in this field could be important both in terms of economics and public policy. While the United States has an early lead in VR development and applications, there could be three primary reasons for concern with respect to competition from China. First, Xi Jinping shows significant interest in this technology, which can have substantial implications in terms of development and adoption. Appearances like photo ops at Chinese VR facilities are a strong sign of his support of this technology, ensuring continued investment and public interest in VR. The structure of China’s government provides Xi a unique ability to pick technologies as focal points and quickly mobilize relevant sectors of the economy. Xi’s attention has already produced two public-private strategic industry partnerships to organize the industry, and it has spurred VR’s inclusion in notable policy initiatives such as Made in China 2025 and the 13th Five-Year Plan.

Furthermore, China has released policy guidelines specifically for VR. Second, China, which already has a large domestic market, has stoked interest in the technology by creating over 3,000 VR arcades across the country, and which could help drive demand for more serious applications, as users become acclimated to VR hardware. The advantage tied to the size of the domestic market is compounded by China’s ability to achieve widespread distribution for relatively low prices. Third, China has an effective system for organizing its industrial base and establishing supply chains. China has developed what it is calling “VR Towns,” also known as “VR Cities.” So far two cities have been chosen as VR Towns with both in the early stages of development. Each VR town will employ a multitude of VR applications in a variety of fields such as the medical, education, business, design, and entertainment fields. Also, the town will have industrial parks that help connect different points of the VR supply chain.

Effectively organizing supply chains for emerging technology is especially important, which became evident during the boom of the commercial drone industry. The United States once led this industry but Chinese firm Da Jiang Innovations now dominates it, controlling over 70 percent of the global commercial drone market. Part of this dominance is due to the construction of industrial parks that collocate multiple components of the supply chain, particularly parts that would otherwise come from distant and disparate locations. As a result, a drone prototype that takes two weeks to make in the United States can be produced in a single day in Shenzhen, the center of China’s attempt to organize technology supply chains. In turn, this consolidated process provides a 50 percent to 60 percent cost advantage when it comes to manufacturing components. This is a lethal combination for competitors, and the VR Towns China is setting up could serve the same purpose.

These three concerns could lead to China achieving dominance over the United States with respect to VR technology. The large domestic market and adoption rates create a heavy demand for content and hardware, which will drive the market. Xi’s personal attention likely ensures that there will be ample resources, specifically labor and capital, to fuel the industry. Finally, the industrial parks provide a way to shorten the turnaround time on prototypes and cut costs.  If China can generate more demand for Chinese products and provide these products at lower prices and faster rates, then it will compete with the United States in this sector more aggressively and may reap the benefits more effectively.

Given the potential value of VR as a tool—and the increasing competition from China—the United States could focus more energy on advancing VR in a coordinated fashion. The United States does not direct industrial development the way China does because it is not a “command economy.” However, the United States has forged public-private partnerships by creating research institutes for different industries. The manufacturing industry is a prime example. The National Network for Manufacturing Innovation, also known as Manufacturing USA, is a series of interconnected research institutes that use public-private partnerships to drive the development of innovative manufacturing technologies. This network was created through the effort of several federal agencies including the Defense Department and the National Science Foundation and backed with a large financial investment. Establishing a research institute with an increased ability to organize supply chains across companies might enable the United States to better compete internationally with VR capabilities. More importantly, such a partnership might encourage U.S. developers and distributors to visualize the future of the VR industry as a whole. Otherwise, America risks missing an opportunity to excel internationally with a valuable and broadly applicable emerging technology.

William Shumate is an assistant policy researcher at the nonprofit, nonpartisan RAND Corporation.

Tim Marler is a senior research engineer at RAND and a professor at the Pardee RAND Graduate School.