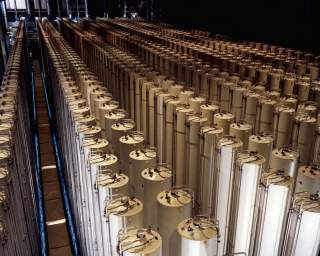 A major focus of criticism of the proposed deal with Iran is that the limitations on Iran’s uranium enrichment program will phase out after ten years. This is a valid concern and, if the deal is concluded, it should come with a commitment by the parties to start immediately on a plan to assure that Iran’s enrichment program does not reemerge as a threat to regional stability.

One way to do that would be to add a multinational layer of supervision to the program. Specifically, the United States and perhaps others among the six countries that have been negotiating with Iran could buy shares in its enrichment program in exchange for having full access to all the associated facilities and a say in how they are managed.

Senior Iranian officials have expressed openness to discussing multi-nationalization. It has been too complex an issue to negotiate in the current time-constrained negotiations. But the conclusion of an agreement at the end of this month or soon thereafter will not be the end of the story. Iran’s enrichment program will continue to be an issue in the region. Prince Turki bin Faisal, the former Saudi intelligence chief, recently stated, “Whatever the Iranians have, we will have, too.”

Putting Iran’s program under multinational control would mitigate the pressure on Saudi Arabia and other regional rivals of Iran to assert their own rights to “peaceful” enrichment programs. Indeed, the door should be open for them to buy a share in the multinational program as well.

National enrichment programs are inherently dual capable: they can be used to enrich uranium for fuel or for weapons. That has been recognized since 1946 when the United States proposed at the United Nations that all enrichment programs be placed under international control. Unfortunately, the emergence of the Cold War sidelined that idea.

In 2003, after Iran’s enrichment program surfaced, Mohammed El Baradei, then-Director General of the International Atomic Energy Agency (IAEA), proposed that national enrichment programs be phased out in favor of multinational arrangements like Urenco, which is controlled jointly by Germany, the Netherlands and the United Kingdom. Urenco, now the world’s second largest provider of enrichment services (after Russia), was originally established in part because of concerns after World War II that Germany might want to acquire nuclear weapons.

For more than three decades, the United States has been able to say to other countries, “we don’t have a civilian plutonium separation program. You don’t need one either.” And it worked—no non-nuclear weapon state (NNWS) has begun separating plutonium since we adopted that posture. Iran seems to have accepted that as a norm and has committed under the proposed deal not to separate plutonium.

We now can say to Iran and other countries whose security establishments are interested in having a nuclear-weapon option, “We don’t have a national civilian uranium enrichment program, you don’t need one either.”

Frank von Hippel is is co-director of the Program on Science and Global Security at Princeton University's Woodrow Wilson School of Public and International Affairs. This piece is based on an article co-authored with Alexander Glaser and Zia Mian that appeared in the June, 19 2015 issue of Science magazine.