A Realpolitik Appraisal of Russia’s Motivations and Goals in Ukraine 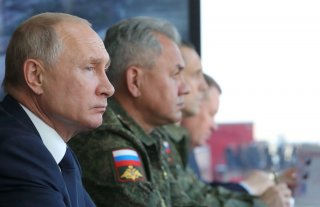 WHAT EXPLAINS Russian conduct in its former sphere of influence? The question is again important, as Belarus faces an uprising, and the question of Ukraine and Georgia joining NATO is back to the forefront. Moscow’s revanchism is typically attributed to a variety of domestic factors, such as regime-stability, crony-corruption, a need for diversionary wars, to more systemic causations like Christian conservatism, hegemonic ambition and imperial expansionism, honor and wounded pride. The country is often dismissed as a weak declining power lashing out which can be ordered around by a degree of coercion. Former diplomat Michael McFaul, for example, claims that History—with a Hegelian capital H—is not on Putin’s side, just as Nikita Khrushchev once claimed History is not on the side of capitalism. And yet others, like historian Timothy Snyder, perceive Moscow to be the greatest challenge ever faced by the West.

But the answer to this question is key to American grand-strategy in Europe. If Moscow is imperial and expansionist, then, of course, there is logically no other option but to it resist by force and deterrence. If, however, Moscow’s actions show rationality, there are areas where one can find agreement and eventual détente. A detailed look at Russian balancing behavior in Ukraine, the most recent theatre of warfare within Europe, suggests that Russia reverts back to the status quo when it feels that “perceived threats” have been addressed. Put simply, to use realist terminology, Russia is a “security maximiser” in the European balance. Moscow is aggressive and even willing to initiate conflict when its “direct strategic interests” are threatened. When those perceived threats are neutralized, Moscow reverts back to the status quo. Moscow lacks the will and capability of being a regional hegemon, but is determined to defend already entrenched material, territorial, military, and strategic interests.

AS ONE observes the protests in Belarus, one should remember the recent history of Ukraine and Russia. The Orange Revolution in Ukraine came as a shock to Kremlin, where a similar scenario played out. Moscow immediately denounced it as an illegal coup d’état—the sort of which occur in fragile young states if external powers facilitate revolution instead of democratic norms. Russian officials accused the United States and NATO of fomenting unrest in Ukraine and renewed efforts to pressure the government in Kiev. Moscow’s reaction to the installation of a pro-Western regime in Ukraine was a combination of both political and economic coercion. Political rhetoric became harsher every passing day, as U.S.-associated supporters of the Orange Revolution included the Agency for International Development, as well as NGOs like Freedom House and the Open Society Institute.

Politically, Russia had always been critical of what it considered Western meddling in Ukraine through NGOs and civil society groups. After the color revolution though, Moscow considered these entities to be Western agents and infiltrators on a mission to destabilize the region. The National Security Concept of Russia accordingly highlighted that the main security threats to the nation included any weakening of Russian political or military influence, by strengthening of foreign military unions or blocs and weakening of the integration process of the Commonwealth of Independent States.

Both the Russian government and intelligence apparatus increasingly started to view and refer to foreign NGOs as agents of the United States and NATO, and began to consider all matters regarding foreign organization and efforts in security terms. Moscow claimed that domestic actors in Ukraine also did not act alone: they had received funding and training from NGOs and organizations, and were trained in civil disobedience, as agents of the West. Similarly, the European Union monitors brought in during elections were regarded with utmost skepticism in Moscow. All these external supports were used by Russia to frame the Orange Revolution as an illegitimate, Western-backed coup meant to drive out Russia from its own sphere of influence.

The primary point of contention, however, was the new Ukrainian government’s political support of Georgia and its rhetoric against Russia’s Black Sea Fleet—the latter of which is considered vital to Russian force projection capabilities. NATO’s 2008 Bucharest summit, which welcomed Ukrainian and Georgian aspirations to NATO membership, was another red line for Moscow. At that point Russian think tanks, reflecting the position of Russia’s political and military elite, began to openly sound war drums over the fate of Crimea (where the Black Sea Fleet is stationed and headquartered). Given Moscow’s military history and its previous strategies regarding homeland defense, it very well may be that Moscow already had a plan in place for the annexation of Crimea in the event of Ukrainian defection over to NATO. At the time though, it was unnecessary: pro-Moscow candidate Viktor Yanukovych won in Ukraine’s 2010 presidential election, thereby (temporarily) reversing Ukraine’s pro-EU tilt.

Yanukovych also reversed Ukraine’s previous position of opposing Russia’s recognition of South Ossetia and Abkhazia, blocked the Ukrainian bid towards further NATO accession, and, in 2013, signaled Ukrainian movement towards the Russian-led Eurasian Customs Union (EAEU). Russian offers of EAEU membership in place of the EU’s Comprehensive Free Trade Agreement seemed final. At the late 2013 EU summit in Vilnius, Yanukovych announced his decision to postpone the Association Agreement with the EU. By 2014, relations between the Russian government and the Ukrainian government seemed positive, even when Russian rhetoric continued to accuse NATO and the EU.

Around this point, the Ukrainian opposition, critical of the direction their country was taking, began to protest in and around the capital, centered around the city’s Maidan square. The protests soon escalated, culminating with a call for Yanukovych’s resignation. Ukraine slid into utter lawlessness, Yanukovych refused to accept the opposition’s demand, and the EU brokered agreement collapsed in February 2014. Yanukovych fled to East Ukraine, and then to Russia.

The Euromaidan revolution, as it is now called, precipitated a rapid strategic reversal in the region and established new rules on the ground. From the Russian perspective, this turn of events was interpreted as an “unconstitutional coup” in Kiev, and fueled worries of Ukraine joining the EU. There were two sides to this. First, there was the economic dimension, as Ukraine, with its population of 45 million, serves as an important market for Russian exporters. Any EU association agreement would hamper Russian exports, as Russian products don’t match the safety standards of European Union. But the second concern was geopolitical: the association agreement also included clauses which would integrate Ukraine to the EU’s common security and defense policy, reinforcing Moscow’s view that the EU is not just a political union, but an extension of NATO ambitions towards the east.

In the six weeks following the Euromaidan revolution, Russia moved swiftly and annexed Crimea while continuously denying that any Russian soldiers were involved in the effort. Following the annexation, Moscow demanded that Kiev initiate new constitutional changes to guarantee the protection of Russian speakers and to ensure decentralized leadership of the region. Over 30,000 Russian troops were amassed on the Russian-Ukrainian border, and Moscow retracted its financial aid and discounted energy supplies to Kiev. It shouldn’t have come as a surprise then that a pro-Russian rebel movement sprung up shortly thereafter in the eastern regions of the country.

TO USE former U.S. national security advisor Zbigniew Brzezinski’s terminology, without Ukraine, Russia ceases to be a Eurasian empire. If Russia controls Ukraine, even as a satellite, it has an enormous territorial buffer, a market for Russian products and myriad strategic resources, and access to the Black Sea. Russian actions in Ukraine, in both after the Orange Revolution and after Euromaidan, has therefore been one of strategic denial.

Complicating matters is the fact that Russia’s military is heavily resource dependent on Ukraine. Prior to the annexation of Crimea, Ukrainian firms produced over three thousand components and armament systems for the Russian military, including the components for manufacture as well as maintenance of the primary vehicle of Russian nuclear deterrence: intercontinental ballistic missiles. These components are designed in Dnipropetrovsk, Ukraine. According to former Russian deputy prime minister Dmitry Rogozin, Russia is incapable of acquiring such products anywhere else. Ukraine also produced the guidance systems for the SS-25 mobile missile launchers and SS-19 silo-based strategic missiles in the eastern Ukrainian oblast of Kharkiv. Almost all Russian modern tank components are built in the Kharkiv Locomotive Factory.

Likewise, the Russian Navy is mostly built and maintained in Ukraine. The Mykolaiv oblast has been a key shipbuilding center since Soviet times, and continues to produce parts for the Russian Navy’s capital ships, including its flagship, the aircraft carrier Admiral Kuznetsov. Eastern Ukraine and the coast of the Black Sea, therefore, remains crucial for Russian naval deterrence. Then there is the Russian air force, which uses air-to-air missiles produced in eastern Ukraine. The maintenance of the hydraulic system for Russian jet fighters like Su-34 is also done in eastern Ukraine. Russian transport used jet engines made by Antonov factory in Ukraine.

Due to logistical and trade reasons, Ukraine’s military-industrial complex is almost entirely located in southern and eastern Ukraine, and is now currently the scene of heavy rebel activity. Losing these would be an existential loss to Russia’s great power status. Critical Ukrainian components and their servicing make up nearly 80 percent of Russia’s strategic missiles forces, and without eastern Ukraine, both Russian nuclear deterrence and naval forces collapse. It is also no coincidence that the heavy fighting around the city of Kramatorsk is over the control of the nkmz industrial complex, which produces hardware, like mining equipment and steel mills, for the Russian military. Russian control of Crimea, for example, granted numerous defense companies located between Donetsk and Luhansk to de facto Russian control. These are of invaluable importance to any Russian plan for massive military rearmament, and Russian independent deterrence depends on the maintenance of these supply and logistics chains.