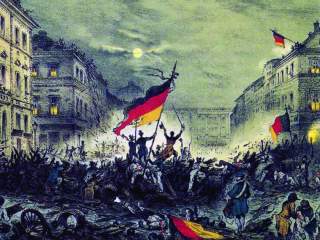 In the lexicon of world politics, “realism” suffers from polysemy. Sometimes the word means nothing more than expedience or prudence in the pursuit of the interest of a state or even a stateless nation. Others use the term to connote raw power politics—the pursuit of interest at the expense of legal norms or ethical ideals. At the other extreme, some self-described realists believe that states must take into account the interest of the international system as a whole. These are all prescriptive doctrines. Realism is also used for a school of international-relations theory in the United States that purports to describe and even predict the behavior of states.

In his comprehensive Realpolitik: A History, John Bew seeks to unravel this conceptual knot by carefully tugging on one particular thread: the term “realpolitik.” A professor in the War Studies Department at King’s College London and Director of the International Centre for the Study of Radicalisation and Political Violence, Bew is the author of Castlereagh: A Life, a study of one of the statesmen who is often held up as an exemplary realist. Bew follows the method of the Cambridge School of intellectual history, associated with scholars like Quentin Skinner, in tracing the evolution of the word and concept “realpolitik”:

"This holds that political ideas, and associated political discourse, should be understood in the context of the historical era in which they were used. They should be treated as products of time and place, rather than as vessels of perennial 'truths.'"

Bew’s project depends on distinguishing realism, as a broad tradition that includes premodern thinkers like Machiavelli, from realpolitik—a term coined by August Ludwig von Rochau in 1853 in Foundations of Realpolitik. In that book, and in a second volume published in 1869, Rochau, a German politician, journalist and liberal nationalist, argued that the unification of the German nation, divided among numerous states, could only take place as a result of realpolitik, not Gefühlspolitik (sentimental politics) or Prinzipienpolitik (principled politics). After helping to form the Progressive Party in Prussia, Rochau lived to see the unification of Germany outside of the Habsburg domains by Otto von Bismarck and won a seat in the Reichstag in 1871. In 1873, Rochau died while writing a biography of Bismarck’s counterpart Count Camillo Cavour, who was a leader in Italy’s unification.

For Rochau, realpolitik was part of an intra-German debate—should most or all Germans be united under a single state, and if so, how? Bew states that the German historian Hajo Holborn

"insists that the term should not be used except for statesmen who entered the scene in the decade after 1848, and even then it needed exact definition. As the use of the word proliferated after 1853, however, its original meaning became blurred. It either came to denote a policy contemptuous of all ideas and ideologies or a policy exclusively employing power for the achievement of its ends."

According to Bew, the key figure in the generalization and vulgarization of realpolitik was Rochau’s fellow National Liberal Heinrich von Treitschke.

While Rochau had rejected anti-Semitism and viewed German Jews as part of the nation, Treitschke was an anti-Semite. And while Rochau had been focused on the unification of Germany, Treitschke, who lived until 1896, turned his attention to the foreign policy of the newly united Kaiserreich:

"As Treitschke considered the potential of German power, his eyes began to turn beyond Europe and to the dream of a German Empire that would rival that of the British and the French. In this we can see the seeds of what was to be called Weltpolitik (world politics). Paving the way for German colonialism, Treitschke argued that international law is 'mere clap-trap when these principles are applied to barbarian nations.'"

The legendary historian Friedrich Meinecke, who succeeded Treitschke as the editor of the Historische Zeitschrift, completed this transference of realpolitik from the national to the international realm. According to Bew:

"For Meinecke, Treitschke had become the foremost German thinker on questions of raison d’état (Staatsräson in German). In Meinecke’s hands, Staatsräson was used interchangeably with Realpolitik—a practice that many twentieth century ‘realist’ scholars would follow. It was Meinecke who did more than any other to fuse the two concepts together, to the extent that they are often presumed to mean the same thing by theorists of international relations to this day."

It is here that the thread Bew is pulling to untangle these concepts snaps. By his own account, after Rochau’s death the term “realpolitik” became simply a synonym for “realism” or “reason of state.” Much of Bew’s study is devoted to recounting the debates over “realism” versus “idealism” that took place between the late nineteenth and the early twentieth century. Few if any of the policymakers, pundits and professors involved in these debates, however, had ever heard of August Ludwig von Rochau or distinguished realpolitik from Staatsräson. If Rochau had never lived and if the term “realpolitik” had never been coined, there is little doubt that similar debates would have taken place.

A more recent example underlines the problem. In the 1980s, the German Greens were divided by a debate among realists or Realos, associated with Joschka Fischer, and so-called fundamentalists or Fundis. The particular issue that divided them was the question of whether the Green Party should take part in coalition governments and cabinets or remain in virtuous opposition. Suppose that the terms had passed into common usage outside of Germany. Today debates among pragmatists and purists worldwide might be called debates among Realos and Fundis. In this hypothetical scenario, it would be pointless to argue that the original, highly local meaning of the terms had been distorted or betrayed. The untranslated German words would simply be used as counters in debates that would have taken place using synonyms, if the phrases Realo and Fundi had never been invented.

Rochau may have coined the word “realpolitik,” but if his particular understanding of its meaning died with him, then it is of little historical import. The strength of the Cambridge School has been its emphasis on what words and concepts mean in widespread public debates, not simply in the works of particular great minds. Bew himself concedes this at one point:

"One of the main themes of the book is that Realpolitik has given birth to a number of bastardized and half-formed versions of itself, which have been the sources of misconception..."

In some cases, this distortion opened the door to great misunderstanding and, worse still, wrongdoing. So there is no desire to revive a cult of Realpolitik here.

Notwithstanding this disclaimer in the introduction, in the concluding chapter Bew sets forth eight recommendations, inspired by the original notion of realpolitik as set forth by August Ludwig von Rochau. The eight lessons of “real Realpolitik” that Bew claims to derive from Rochau’s Foundations of Realpolitik are banal and abstract:

“2. Real Realpolitik is an enemy of ‘habitual self-delusions’ and ‘naively accepted catchwords’ from wherever they come.” And: “6. Real Realpolitik is ecumenical in the tools it chooses for political analysis and is suspicious of those methods of analysis that claim to offer a science of politics, or to be innately superior to others.” Bew’s list is unlikely to inspire a revival of Rochauvian “real Realpolitik,” and his work would have been stronger if this final chapter had been excised.

Fortunately, the value of Realpolitik: A History does not rest on Bew’s claims for the historical importance of Rochau. One of Bew’s most valuable services to scholarship in the book is in tracing the intellectual development of the European émigrés like Hans Morgenthau and Arnold Wolfers who helped stimulate the postwar American school of realism in international-relations theory. Like other academic schools, American international-relations theory has its founding myths. Several generations of students and scholars after World War II were taught the myth that the United States, sheltered by the oceans and benefiting from the indirect protection of the Royal Navy, was innocent of serious thinking about world politics. What passed for an American philosophy of international affairs in the period before Pearl Harbor tended to be impractical schemes for international law, collective security and global social reform, designated by the pejorative term “Wilsonian.” Forced into the harsh world of power politics by the world wars and the Cold War, so the story goes, Americans were schooled in the arcana imperii by Central European émigrés, of whom the most important for the postwar discipline of American academic realism was Hans Morgenthau, author of Politics Among Nations. These immigrant lawgivers were then succeeded by native-born American realists like Kenneth Waltz and John Mearsheimer (Henry Kissinger, who emigrated at a young age, is a transitional figure).

In a chapter entitled “German Émigrés and American Realism,” Bew undermines this bogus tale of innocents at home in two important ways. First, he points out that German-American intellectual exchange long antedated the interwar period: “American sociology was particularly indebted to German precedents—with Lester Ward, Albion Small, Robert Park, and Arthur Bentley building on the work of German predecessors such as Ludwig Gumplowicz, Gustav Ratzenhofer, and Franz Oppenheimer.” Bew could have elaborated on this point: Johns Hopkins University—and Woodrow Wilson, who taught there—sought to duplicate the rigorous German academic system in America. What’s more, New England Transcendentalists were deeply influenced by German Romanticism. Via Friedrich List, the “American school” of “national economists” influenced the German Historical School of economics, with its emphasis on economic nationalism and an activist state. Influence later flowed the other way, with American reformers borrowing the term “progressive” from Germans and modeling the American Economic Association on German antecedents. In the nineteenth century there was even a school of St. Louis Hegelians.