Rebels Who'd Had a Cause: Havel and Michnik After Communism 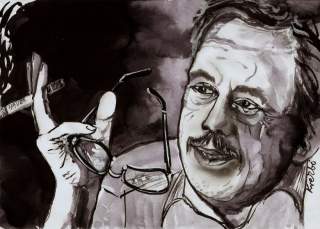 WHAT HAPPENS to revolutionaries after the revolution? If the revolution fails, the answer is easy: they end up in exile, in prison or dead. But what if the uprising succeeds? Then the answer is more complicated. Successful rebels scatter across the political landscape, with former brothers-in-arms often becoming fierce enemies—professional radicals on one side, upholders of the new status quo on the other.

In one of the fascinating exchanges included in a collection of letters, interviews and essays called An Uncanny Era: Conversations Between Václav Havel & Adam Michnik, two of the preeminent heroes of the upheavals that destroyed the Soviet empire and brought the Cold War to an end survey the fates of their colleagues among the dissidents. Some returned to their normal careers because protest had been only a temporary disruption in the course of their lives. Others chose more public avenues, plunging into politics full-time. Havel and Michnik, of course, both went on to hold positions of great distinction—Havel as president of Czechoslovakia and then, after his country’s breakup, of the Czech Republic; Michnik as editor-in-chief of the influential Warsaw daily Gazeta Wyborcza. Still others, however, turned bitter, disillusioned. A few, bereft of hope and their dreams shattered, went mad.

Post-Communist Eastern Europe, with its Hieronymus Bosch panorama of greed, corruption, hedonism and cynicism, gave the former revolutionaries much to be disillusioned about. Was this the freedom they had sacrificed so much to attain? Did it amount to nothing more than enrichissez vous? “We changed the human rights charter into a credit card,” Michnik writes. Both Havel (until his death in 2011) and Michnik struggled to maintain their bearings in a low, dishonest time, and An Uncanny Era, together with a companion volume of essays by Michnik entitled The Trouble with History, can be read as a plea to keep the revolutionary faith, to uphold the idealism that motivated the battle against Communism—even if it’s not clear what idealism means in a postideological age.

What’s more, since Havel and Michnik believe that the intellectual and spiritual shortcomings they perceive extend far beyond their own societies, they see themselves as prophets of a kind, addressing not only Eastern Europeans at sea in an era of predatory capitalism and toxic nationalism, but also readers throughout the West, all standing before an abyss of corrosive cynicism. As the always-hopeful Havel told Michnik:

That means that we would take upon ourselves a bigger responsibility and in some sense we will become a source of inspiration for the wealthy West. This could happen if we were able well ahead of time to notice the dangers lurking in the contemporary world and to articulate them in the right way thanks to the specific experience of Communism and our entire history.

For Havel and Michnik, that history began in the 1960s—in a double sense. Both were products of the worldwide sixties cultural explosion of hippies, student rebellions, and rock and roll; rock music had a key role in instigating the revolt against Soviet domination, and when Havel took up residence in the presidential palace, he played host to Frank Zappa and the Rolling Stones. But they were “1968-ers” in a political sense as well, deeply affected when Soviet power crushed the Prague Spring of Alexander Dubcek’s reformist government that year, killing the promise of “socialism with a human face.” The lesson Moscow’s tanks taught disaffected students was that changing Communism from within was never going to happen, but neither would it be brought down by insurrectionist, anti-Communist violence. Between those two poles, Eastern Europe’s dissident movement was born.

A DECADE after the abortive Prague Spring, eight young oppositionists—four from Poland, four from Czechoslovakia—trekked up the mountains bordering the two countries to meet, drink vodka and exchange ideas. Out of that encounter came promises of cooperation, Havel’s hugely important essay “The Power of the Powerless,” and the beginnings of a thirty-year friendship between Havel and Michnik. What followed, too, was increased repression by the authorities—wiretaps, personal harassment, interrogations, house arrests and years of imprisonment. There were so few protesters at first that the sacrifices seemed, to use Michnik’s word, “ridiculous.” What chances did the dissidents have against the mighty Soviet machine? Along with the physical suffering, they endured the torments of a terrible loneliness.

In a cautious yet ultimately bitter essay in The Trouble with History, Michnik writes that even natural allies like the West German chancellor Willy Brandt, who might have been expected to support the cause of human rights, abandoned them for the sake of his Ostpolitik. Michnik recognizes the difficulty of determining just when an understandable desire for rapprochement in international affairs mutates into a policy of appeasement. Haunting questions of history keep reemerging through these two books. Did Czechoslovakia’s president Edvard Benes have any choice but to yield to Hitler’s force majeure at Munich? Was General Wojciech Jaruzelski right to declare martial law in Poland in 1981 to avert a Soviet invasion? Havel says he developed more sympathy for Benes after he became president and had to deal with the dilemmas of governance. Michnik writes that the issue for those leaders of small powers was whether to “go up in flames, or to capitulate in order to survive.” It’s a problem as old as Thucydides. Nonetheless, West Germany was not exactly a small power, and in Brandt’s case, Michnik says disapprovingly, “Geopolitics drove out morality.”

In the face of the brute realities of power politics, all the isolated dissidents had was their idealism. But sometimes hopeless causes win. Sometimes idealism stops tanks. Even as late as 1988, Michnik says, only “some possessed village idiot” would have predicted that within a few years the Soviet Union would implode, Communism would die, and Poland and Czechoslovakia would be free to end censorship, hold democratic elections and join NATO. “So—after all that—when somebody tells me that this glass is half-empty, then I reply that he has probably never had a beer in his life.”

Yet what precisely was the idealism that drove the Havels and Michniks? What enabled them to live all those years like Sisyphus, pushing their boulder up the mountain without hope? That wasn’t entirely clear, not even to them. They knew they were against Communism and Soviet domination, but it was much harder for them to articulate what they were for. Moreover, to build as broad a movement as possible, it was best to remain vague. So they spoke with “a polyphonic voice,” with no illusions about constructing the perfect society out of the post-Communist rubble; as Michnik put it, “Our revolution was a revolution without a utopia.” “Solidarity was forced on us,” Havel says, “by our common enemy.” Michnik observes that Havel himself had “reservations” even about parliamentary democracy, seeing it as a possible transitional phase to some other, more undefined end.

Having experienced the long lines and perennial shortages of the Soviet system, of one thing they were sure: they knew they wanted no part of a centralized economy. “The fact that everything should be privately owned and that there is a law of supply and demand is for me obvious,” Havel says. He took pleasure in the fact that greengrocers, the kind of people he wrote about in “The Power of the Powerless,” could now own their own shops and set their own prices. At the same time, he didn’t think free markets were the answer to every problem; they were “not a religion,” and Havel was no libertarian. Michnik puts his own spin on the question. Eastern Europeans would be wise, he says, to reject the “cult” of the ruthless market for “a market with a human face.” When it came to economics—as was true in other matters—the two men agreed that they were neither on the left nor the right.

Both of these fundamentally moderate men were compelled to revolution by the circumstances of their time, and they were troubled by what they saw as the rush from one extreme to the other—from a creaky, state-regulated system to an economic free-for-all, and from a meek acquiescence in an oppressive left-wing tyranny to a fanatical anti-Communism intent on extirpating all traces of the Soviet past. Senator Joseph McCarthy, Michnik reports, had become a hero to some of his countrymen, who chose to ignore the many different kinds of people who had been caught in the Soviet web. “Should the writer who supported the communist power in its early years, but later became a symbol of resistance to the dictatorship and a moral authority, be counted as a traitor or included in the pantheon of national heroes?” It was necessary to recognize degrees of culpability; in the bad old days, one often did what one had to do in order to survive. “All sorts of things happened,” Michnik writes.