Rebuilding Iraq Is Expensive. Are Donors Willing to Pay the Price? 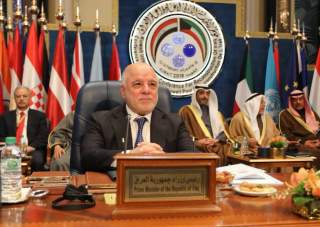 July 10 of last year was very likely one of the best days of Iraqi prime minister Haider al-Abadi’s premiership. Surrounded by generals from the Iraqi army and dressed in fatigues himself, Abadi announced Mosul’s liberation to the nation after approximately nine months of house-to-house, block-to-block combat against the Islamic State. It was a day all Iraqis could be thankful for, even if many of them understood in the back of their minds that Iraq had a long, long way to go before it could return to the status of a semi-normal country.

During an international donor and investment conference in Kuwait last week, Iraqi officials had the opportunity to make their case. It is a fact of life that Iraq won’t be able rebuild without international financial assistance: although the Iraqis are fortunate enough to sit on a pool of crude oil primed and ready for export, the extent of the devastation owing to the war and the fluctuation of the oil market means that somebody will have to be generous to make up for some of Baghdad’s shortfall in revenue. That’s precisely why the Kuwait conference was scheduled in the first place—to bring donors from the Middle East, Europe and the United States into the same ballroom so Iraq and its allies can squeeze cash out of countries that are less fiscally challenged.

Iraq estimated that it required $88 billion to rebuild what was destroyed, down from the $100 billion that Iraq’s planning minister cited after the battle for Mosul was complete. The conference ended with $30 billion in pledges, a fraction of what Iraqi leaders were hoping to raise. You could pick up on the sense of disappointment in Iraqi Foreign Minister Ibrahim al-Jaafari’s voice, even as he thanked the donors who did contribute for their generosity.

To the Iraqis, $30 billion is simply not enough. To say the country is in a bad way would be a massive understatement. The word “calamitous” is more accurate; western Mosul looks like the end of civilization, with rescue workers still digging bodies out of the rubble. About 2.3 million Iraqis remain internally displaced, stuck in camps in Iraqi Kurdistan or out in the harsh desert. Those who do have the means to go back to their neighborhoods find their homes and businesses destroyed. The UN’s demining service has assessed that it will take about a decade to find and defuse all of the unexplored ordinance hidden behind every corner. All of this, from resettling refugees and providing financial relief to displaced families to enticing international investors into the Iraqi market, takes money. And a lot of it.

The Iraqi government is undeniably frustrated that more countries weren’t willing to step up and help in post-conflict reconstruction. Special blame goes to Saudi Arabia, the United Arab Emirates, Qatar, and Kuwait, Iraq’s Persian Gulf neighbors, which contributed a combined $5 billion in financial assistance, most of which are in the form of loans rather than grants.

The Iraqis, however, need to understand that the international community looks upon Iraq warily. The country is not exactly a business-friendly environment with predictable political currents and a reliable and corrupt-free bureaucracy. Due to the security situation, multinational companies willing to invest in the Iraqi market need to spend millions of dollars on keeping their employees safe and their assets defended. Oil conglomerates like Shell or Exxon-Mobile are able to fit the bill for those expenses, but one can’t say the same for the vast majority of companies that don’t make such substantial profits every year. Right now, the only thing predictable about doing business in Iraq is its unpredictability.

Iraqi leaders must also realize that the West, particularly the United States, is tired of sending money to their country. Washington has shoveled hundreds of billions of dollars—trillions when you add in long-term veterans care, security assistance, reconstruction aid, budget support and opportunity costs—into Iraq over the last fifteen years. This includes $25 billion to build a professional security force that essentially collapsed three years after U.S. troops departed from the country. Corruption within Iraq’s political system is rife, and the parochialism, opportunism and sectarianism that continues to dominate Iraqi politics have taken the form of terminal diseases. While Prime Minister Abadi is doing his best to root sectarian politics out, the problem is so widespread and deep that the job is bigger than one man and one administration.

The United States, in short, is exhausted, and you can’t blame the American people for not wanting more of their taxpayer dollars earmarked for rebuilding structures in Ramada—especially when their own roads, bridges, highways and subways are in a pathetic state of disrepute.

This is not to argue that the United States has no role in Iraq at all. Washington should have a robust diplomatic presence in the country in order build new relationships across Iraq’s sectarian and political divides. The U.S. government can continue to fund the good work of organizations like the U.S. Institute of Peace, which have had success in resolving local disputes and mediating between tribes to prevent disputes from descending into a new and bloody cycle of revenge. Secretary of State Rex Tillerson should get on the phone with his Saudi, Qatari, Emirati and Kuwaiti colleagues at every opportunity and press them to step up their own involvement in Iraq’s post-Islamic State phase. And the Trump administration should maintain and build upon the extensive intelligence relationship Washington and Baghdad have formed through over a decade and a half of blood, sweat, and tears.

What the United States cannot do, however, is fly in another hundred billion dollars if unmarked American currency to Baghdad or ever again place U.S. soldiers in the position of being Iraq’s perpetual guardians. If Iraq has any chance in resolving these seemingly irresolvable conflicts over the long term, Iraqis need to do the job themselves.