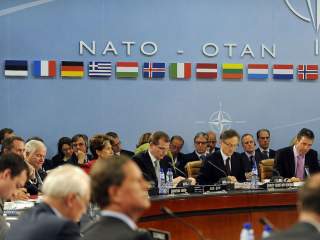 The NATO summit scheduled for July in Warsaw, Poland, will close out the Obama administration’s management of cooperation with America’s transatlantic allies. The president who comes to office in January 2017 will be called on to ensure that this relationship remains a vital support for American interests as well as a touchstone for Western values. In particular, the next president will have to build consensus among the allies so that they can be better prepared to respond to a host of security challenges, including both Russian behavior in Europe and radical extremism internationally, most especially from the Islamic State.

The transatlantic agenda for the next American administration will include dealing with continuing threats to Western security interests and fundamental values. In Europe, the U.S. and NATO goal of helping construct a Euro-Atlantic community that is “whole and free” has been challenged by Russia’s President Putin, who harbors dreams of reestablishing the former Soviet Union’s influence and control.

The interests of the United States and Europe are also threatened by the radical Islamic State’s attack on democracy, individual liberty and the rule of law, core values on which the West is based. Dealing with this challenge will require broad-based international political, economic and financial cooperation in addition to targeting ISIS assets. Here, NATO can do more than it has done so far, and American leadership can move the alliance in the right direction

A progressive foreign policy must lead NATO to respond to these threats with a clear-eyed view of when military intervention is in Western interests and when it is not. The use of military force will in most cases have to be set in comprehensive approaches that include a variety of nonmilitary responses to security challenges. The United States must insist that its NATO partners contribute much more to the defense of Western values and interests than they have since the end of the Cold War. For its part, the United States needs to lead by example. Leadership requires listening as well as leading. Leadership also requires compromise. “Compromise” is not a dirty word. On most occasions, a unified position with allies will be more valuable than insisting on every detail of initial U.S. preferences.

The United States and its allies have sanctioned Russia for its aggression against Ukraine, but there is more work left to do. Reasonable steps are being taken to fill gaps in the U.S. military presence in Europe—to strengthen deterrence of Russian threats to Europe and to reassure those European allies that are most exposed to Russian power.

Ever since Russia invaded Crimea with its “little green men” in 2014, there has been a debate about how best to support Ukraine’s desire to remain a sovereign, independent state. The United States and its allies need to continue to provide strong resistance, including sanctions, against further Russian assaults on Ukraine’s sovereignty. At the same time, NATO and the European Union should intensify cooperation with the government of Ukraine, not only to help defend its sovereignty, but also to support reform of its political and economic system to control corruption and to earn the support of Ukrainian citizens. The Obama administration has so far been unwilling to provide “lethal” arms to Ukraine, and influential voices in the United States have argued that Russia’s behavior warrants such assistance. At this point, however, keeping this option in reserve provides leverage over future Russian behavior without contributing to escalation of the crisis. Prematurely providing lethal arms to Ukraine would risk giving President Putin cover to escalate Russia’s illegal intrusion in Ukraine and, given the power of the Russian military, not likely make much of a difference on any battlefield in the near future without tending to more basic deficiencies in the Ukrainian armed forces.

When it is in the interest of the United States to cooperate with Moscow, such cooperation should continue, but with a clear understanding that President Putin’s Russia has its own agenda that frequently runs contrary to U.S. and allied interests. Even when Russia and the United States are at cross purposes elsewhere, it is important, for example, to work together to manage the U.S.-Russian strategic nuclear relationship, promote a peaceful end to the Syrian conflict, counter terrorist threats, prevent proliferation of weapons of mass destruction, deal with climate change and support the International Space Station.

Across the Mediterranean from Europe, the United States and its allies have a common interest in containing, reducing and eventually eliminating the threats from Islamic State and other terrorist organizations. The first steps in this process require attacking the leadership, forces and infrastructure of the terrorists to limit their ability to mount attacks on the West. At the same time, it is critically important that the broader international community be engaged in the fight against ISIS. It is no easy task to bring together regional states to join in the fight. But it is critically important that Saudi Arabia and other Sunni Muslim states play an active part. Ultimately, however, any lasting defeat of ISIS will require stabilizing and governing territory, which is something that military force alone can never accomplish.

Looking ahead, dealing with terrorist threats and other international security challenges requires more tools than just those available in the U.S. and NATO military tool kits. To improve the West’s ability to respond to future security challenges, the United States should propose stronger and more effective coordination with its allies of nonmilitary instruments of security policy. Such stronger cooperation could include a wide range of instruments, including diplomacy, economic and financial measures, police cooperation, intelligence sharing, public information coordination, development assistance, and the like. A new consultative Atlantic Community Organization, including all NATO and EU members and representatives of both organizations, could be established to coordinate the nonmilitary responses to security challenges now and in the future.

A progressive U.S. foreign policy in transatlantic relations can and should be based on the wide area of common values and interests reflected in the 1949 North Atlantic Treaty and sustained through cooperation in NATO. The relationship can be strengthened in the future with firm and reliable U.S. leadership, matched by allied defense efforts that reflect a shared appreciation of the threats to Western security and society.

Stanley R. Sloan served as an officer in the U.S. Air Force, Deputy National Intelligence Officer at the CIA, and the Senior Specialist in International Security Policy for the Congressional Research Service. He currently is a Visiting Scholar in Political Science at Middlebury College and a Nonresident Senior Fellow at the Atlantic Council of the United States.