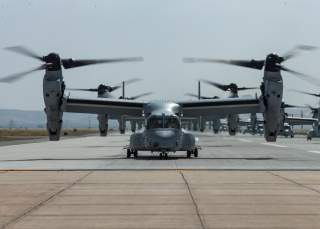 Is a recession coming? Most economists—and most ordinary Americans—seem to think so. If they’re right, it will spell tumultuous times for U.S. politics, with unpredictable consequences for next year’s elections and beyond. One thing that a recession would not do, however, is catalyze major cuts to U.S. overseas commitments. While a recession would surely widen the already significant gap between America’s international ambitions and its domestic capacity to pay for an expansive foreign-policy agenda, it would not by itself compel a resolution to the problem. This is true no matter who wins the White House in 2020.

In theory, presidents are meant to devise foreign policy according to the available means. The most effective foreign policies are supposed to be those that keep international commitments in balance with national power. Even if leaders can cobble together the funding for an overly ambitious foreign policy—through higher taxes or borrowing, for example—they will not be thanked for their efforts. Instead, domestic actors will fight hard to undo a foreign-policy agenda that they view as a waste of scarce national resources. This, at least, was the argument put forward by Walter Lippmann seventy-six years ago: that outsized foreign policies are destined to be politically unsustainable even if they are fiscally manageable in the short-term.

There is no question that the United States today is living beyond its means. The current year’s budget deficit is predicted to exceed $1.1 trillion. The national debt is $22 trillion and counting, saddling the country with close to $400 billion of interest payments each year. These are whopping figures, especially considering they are being chalked up during a period of relative economic prosperity. The orthodox approach would be to trim the national debt in preparation for the next economic downturn. The United States is doing the opposite.

Not all of America’s fiscal problems can be attributed to its expensive foreign policy, of course. Mandatory programs such as Social Security, Medicare, and Medicaid still constitute the lion’s share of the federal budget. But U.S. foreign policy is far from cheap. Taken together, the Department of Defense, State Department, USAID, and the Department of Energy’s nuclear weapons programs account for around $1 trillion of annual spending. This is a price tag that the country cannot easily afford.

This is a crisis nearly two decades in the making. At the end of the 1990s, the federal government had achieved a budget surplus and was slowly reducing the size of the national debt. But this trend was sharply reversed under President George W. Bush, who pursued deep tax cuts alongside an expansive foreign-policy agenda. Under Bush, receipts to the U.S. Treasury simply could not keep pace with the massive outlays required by the post–9/11 invasions of Afghanistan and Iraq. His answer was to authorize increased borrowing—a telltale sign that the gap between commitments and available resources was widening.

Things got worse under President Barack Obama. The 2008 financial crisis sent U.S. government tax receipts tumbling, yet Obama sought over $800 billion of tax cuts and new public spending (the “fiscal stimulus”) to soften the economic blow being felt by ordinary Americans. Meanwhile, Obama struggled to end America’s wars in the Middle East (even sending an additional thirty thousand troops to Afghanistan). The result was yet more borrowing, with the national debt growing by $9 trillion during Obama’s two terms.

In 2011, the foreign-policy expert Michael Mandelbaum argued that a more circumscribed world role had become inevitable. He painted America’s gigantic budget deficits and its ballooning national debt as serious threats to the country’s economic security—and, by extension, its national security. At some point, Mandelbaum reasoned, decisionmakers in Washington would have to face this reality. Nations simply cannot sustain foreign policies that so obviously outstrip their available resources. Had he been alive, Walter Lippmann would surely have agreed.

Yet America’s leaders have been poor students of Lippmann and Mandelbaum. While defense spending did eventually decrease under Obama, it has bounced back under the current administration. Among other things, President Donald Trump has called for an overhaul of the U.S. nuclear arsenal, an expansion of the Navy, and a new Space Force. More immediately, he has expanded the war effort in Afghanistan, announced the deployment of additional troops to countries like Poland and Saudi Arabia, and even mooted a new mutual defense treaty with Israel. Even if he takes issue with several key pillars of U.S. foreign policy, he shows no signs of wanting to shrink the overall cost of America’s world role (except, perhaps, the foreign aid budget).

How can it be that the United States has avoided making the hard choices that Mandelbaum regarded as inevitable just eight years ago? Part of the answer is that the United States has financed its post–9/11 wars through borrowing rather than direct taxation. As Rosella Capella Zielinski has shown, borrowing allows governments to get away with higher levels of military spending because the costs are shifted onto future generations. American voters might complain about soaring deficits in the abstract, but their unhappiness hasn’t been nearly enough to cajole lawmakers into acting. On the contrary, fiscal conservatives seem to be a dying breed on Capitol Hill. So long as taxes are low, politicians are happy to keep racking up the bills—including those for America’s enormous military establishment.

What would happen if another recession hit? Would a severe economic downturn push America’s leaders to finally bring commitments back into balance with what the country can afford?

Under Trump, the answer is almost certainly no. For even if Trump sometimes masquerades as retrencher-in-chief, it should be clear by now that he is actually a committed militarist who is dedicated to augmenting America’s armed forces, no matter the cost. The overwhelming majority of Republican lawmakers will support these efforts, while Democrats will remain divided on the question. There is no reason to believe that Trump would view his plans for the U.S. military as unsustainable, even in the context of an economic contraction.

This is not to say that Trump and the GOP wouldn’t seek to make budget cuts in the wake of a new recession. But it is highly unlikely that these would take the form of cuts to the military budget. Rather, the traditional Republican approach has been to portray the defense budget as inviolable—and to argue, instead, for entitlement reform as the only way to shrink the federal budget while protecting national security.

Things will be different if Trump is defeated in 2020. None of the current Democrat contenders for the White House are anything close to being as militaristic as Trump. Each of them would surely seek to protect domestic programs from budget cuts in the midst of a damaging economic recession. But most leading Democrats tout their internationalist credentials as a selling point; they view America’s overseas commitments as vital pillars of national security, which makes them unlikely candidates for meaningful retrenchment.

What this means is that the so-called “Lippmann gap” seems destined to persist for the time being. The United States will be forced to keep paying for its gargantuan overseas commitments—mostly through borrowing—even as bitter disagreements rage over the proper allocation of taxpayer money. Instead of being a unifying endeavor, foreign policy will fuel domestic dissension and contribute to the increasing polarization of political opinion.

The next recession will exacerbate these problems and put America’s stark domestic divisions under the spotlight. But it will take more than resource scarcity to provoke a major shift in the nation’s overseas posture.