A Recipe for Disaster: Russian Planes in the Air, a Divided West and Ukraine on the Brink 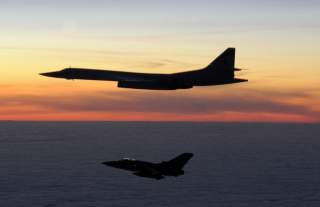 Despite the seemingly friendly (and subsequently much ballyhooed) encounter between Presidents Obama and Putin on the sidelines of the APEC summit in Beijing on Monday, the situation in eastern Ukraine continues to deteriorate. Reports indicate the heaviest fighting since the announcement of the September 5 ceasefire is taking place in and around Donetsk, while Ukrainian troops are said to be bracing themselves for a coming assault on the strategically important southeastern port city of Mariupol, the capture of which would be but the first step in the process of opening a “land-bridge” to Russian-held Crimea.

All of the foregoing is taking place alongside a dangerous deterioration in relations between the West and Russia. Throughout October, much attention had been paid to reports emanating out of Stockholm that a Russian submarine had been stalking the Swedish coast; Sweden’s very own Hunt for Red October. Yet all the alarm was for naught. Sweden called off the search for the elusive vessel only a week later, saying, in effect: never mind. Throughout, the Russian defense ministry denied the charge that it was violating Sweden’s territorial sovereignty, calling the week-long search (and the ensuing media circus) a “tragicomedy.”

Even more serious are allegations that Russian fighters and long-range bombers have been engaged in serial incursions into European airspace over the past several weeks, with one London-based think tank accusing Russia of “dangerous brinkmanship.” Some analysts believe these unannounced incursions into European airspace are bound to put passenger airliners in jeopardy. Yet U.S. military officials acknowledge that most of the flights have taken place in international airspace, and while NATO Supreme Allied Commander General Philip Breedlove called the flights “problematic,” he noted that NATO has not raised the issue with its Russian counterparts, underscoring the essentially routine nature of such maneuvers. Nevertheless, an uptick in the number of incursions does heighten the risk that an unintended tragedy along the lines of the MH17 disaster could indeed occur.

Meanwhile, the divisions within the West are becoming more pronounced all the time. On Tuesday, the EU’s newly minted high representative for foreign and security policy, Federica Mogherini, was in Berlin where she pressed German foreign minister Frank-Walter Steinmeier to strengthen the sanctions regime against Russia. Yet, that same day, German chancellor Angela Merkel came out against additional sanctions, saying the focus should be on addressing Ukraine’s rapidly deteriorating humanitarian situation at the forthcoming EU foreign-ministers meeting in Brussels.

And while Mogherini dutifully reiterated the West’s view that the sanctions have “very seriously” affected the Russian economy, what they are also doing is exposing a rift between the United States and Europe. The United States is basically insulated from any of the collateral damage that results from the sanctions, because two-way trade between Russia and the United States, at roughly $38 billion, is anemic at best. Russia is America’s 28th-largest trading partner. As Fortune magazine recently put it: A U.S.-Russian trade relationship? There really isn’t one.

The ramifications of prolonging the sanctions regime are far more consequential for Europe. France, for instance, has been obliged to postpone its shipment of two Mistral-class warships to Russia, worth $1.6 billion. And a report released this summer by a German trade association indicated that sanctions could put up to 25,000 German manufacturing jobs at risk, while Deutsche Bank reported that German growth could fall by as much as 0.5 percent as a result of the sanctions.

The root of the problem is, as I have written previously, that the West, led by the United States, is studiously (and recklessly) ignoring the cold, hard, unalterable fact that it is Mr. Putin who has the stronger hand to play in the Donbas; and further, he is intent on playing it. As such, the way to help deliver the long-suffering population of eastern Ukraine from the nightmare of the last months is through the pursuit of a negotiated settlement. The parameters for such a settlement are widely known: a federal Ukraine that allows for a measure of autonomy for the oblasts, official recognition of the Russian language and, above all, a guarantee of Ukraine’s nonaligned status. While it is not unreasonable to expect Moscow and Kiev can find a compromise to the first two, there is little reason to expect either side will budge with regard to the third. Yet the surest way to put an end to the fighting is for the West to credibly assure Moscow that Ukraine’s accession to NATO is not going to happen: not now, not ever.

As Senate Republicans take charge of the Foreign Relations and Armed Services Committees and begin to pressure the administration over the Ukraine crisis, it bears repeating that no military solution to the current crisis exists. The road to peace begins with the recognition that Ukraine matters far more to Russia than it ever will to Europe or to the United States. But until the West acknowledges this and begins to act accordingly, there is scant hope that the fighting in the Donbas will cease.