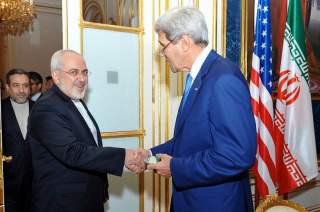 As a mutually acceptable deal with Iran remains elusive despite the hopes and efforts of the P5+1 group of world powers, the risk of the talks failing is growing.

Opponents of the deal are mobilizing, and increasingly the outcome of the negotiations is cast as a binary choice: either Iran will get nuclear weapons or it will not. Failure to reach a deal is cast in similarly stark terms. The talks collapsing, we are told, would result in an increased risk of an Israeli military strike, the expansion of hostilities and violence throughout the Middle East, and the unraveling of the entire nuclear nonproliferation regime.

There is a lot at stake for all the parties involved, which is enough for each side to want to reach a deal, regardless of their differences on other issues.

At present, negotiations with Iran have stalled on a number of important technical questions.  Key among these is how much enrichment capability Iran would be permitted. Relatedly, the two sides are still negotiating permissible volumes of low-enriched uranium stockpiles, the construction of the Arak reactor, the closing of the Fordow underground enrichment facility, Iran’s past nuclear activities, its missile program, and a host of other issues.

The parties are also at odds over how the sanctions would be lifted if a deal is struck: on the procedure for lifting sanctions as well: Tehran insists on a one-step process while the P5+1 want to gradually lift sanctions over time as Iran’s complies with its commitments This latter approach would take years.

However, the main obstacle to a deal will most likely be political. There are the domestic factors at work, particularly in Iran and the United States. In Iran, there is an apparent power struggle between Ayatollah Khamenei and President Rouhani. On the other hand, in the United States, there is the growing rift between President Obama and the Republican-controlled Congress over the reported terms of a comprehensive agreement.

Further complicating matters, there have been a number of dramatics change in the international climate surrounding the talks since the interim agreement was signed in November 2013.

One such change is that Ukraine crisis, which has deeply divided the P5+1 group that previously spoke with a singular voice on the Iran nuclear issue. Within the P5+1, two camps have formed— Russia and the United States and its allies— which have imposed sanctions and threatened military action against each other. This has closed virtually all channels of cooperation between Russia and the West, who now consider each other adversaries. This undoubtedly makes it difficult for Russia and the West to cooperate on the Iranian nuclear issue.

The emergence of the Islamic State in Syria and Iraq (ISIS) has also altered the international environment surrounding the talks. Unlike the Ukraine crisis, which divides the P5+1 internally, Iran and the world powers are on the same side in the battle against ISIS. Iran could also be an important partner for the United States in Afghanistan by supporting the Afghan government in the likely event that the Taliban attempts to reconquer the country after all coalition troops leave. The Afghan military is already suffering an unprecedented number of casualties in its fight against the Taliban and could use some neighborly assistance. The Iranian leadership probably believes that these changes substantially strengthen its negotiating position, and thus expects significant concessions from the P5+1.

If the current negotiations fail, the P5+1 powers are unlikely to agree on new sanctions at the United Nations given their own divisions. Furthermore, Iran will have the option to pursue separate negotiations with Russia, China, and some European states, all of whom will want to keep on talking.

Thus, failure to get a deal in the coming months will probably result in the P5+1 coalition falling apart. On the one hand, the United States will likely impose its own, new unilateral sanctions on Iran. Europe will be torn between following America’s lead and its own desire to keep the negotiations going. Meanwhile, Russia— and possibly China—will probably offer economic assistance to Iran, thus undermining U.S. sanctions.

However, failure to reach a comprehensive deal does not have to lead to such dire consequences. There is another option: namely, the parties could put aside the ambitious goal of reaching a comprehensive agreement at once and adopt a more modest, gradual approach, similar to what Russia and the United States did for decades during arms reduction talks.

In the first stage of such an approach, the P5+1 and Iran could agree on issues of transparency. For Iran, this would mean allowing IAEA intrusive controls, including implementing the Additional Protocol and the revised Code 3.1 of the 2003 Subsidiary Arrangements, which would require Iran to provide the IAEA with all information on nuclear energy-related projects from the moment they are conceived.

This partial agreement could remain in effect for a period of ten to fifteen years, while the time periods for complying with other conditions in the November 2013 Joint Plan of Action could be extended. This would be better than no agreement at all.

In the next stage of a gradualist approach, the parties could turn to limiting Iran’s plutonium cycle. This would include the construction of the heavy-water reactor at Arak, strict limits on plutonium separation, and other related issues.

After that, discussions on the most contentious issues ought to begin. This would include restrictions on the present and future number and features of uranium-enrichment facilities intended for peaceful energy production, the number and efficiency of centrifuges, and the size and physical form of Iran’s low-enriched uranium stockpiles.

Finally, the last stage of this approach should focus on suspicions of past violations as well as Iran’s missile program.

In exchange, the UN, the European Union, and the United States would gradually rollback their sanctions over the course of the negotiations, ultimately lifting them entirely. Cooperation with Iran on the peaceful use of atomic energy could also resume at this point.

Of course, this scenario would not be easy given the current political climate, but it is more realistic than reaching a go-for-broke comprehensive deal. Thus, it is the only plausible option at this time.

Alexei Arbatov is a scholar in residence at the Carnegie Moscow Center.