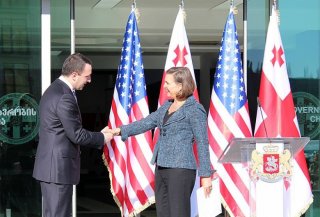 A high-profile campaign by three well-regarded think tanks (Brookings, the Atlantic Council and the Chicago Council on Global Affairs) urging President Obama to send so-called defensive weapons to Kiev recently kicked off a surprisingly intense debate inside the Beltway over the wisdom of such a policy. Former government officials and academics acting in a very public manner to try and influence administration policy one way or another is par for the course and is, especially when it results in a substantive debate over the merits of a given policy choice, a very good sign that democratic discourse is not dead in Washington—at least not yet.

The debate over whether to arm Kiev is raging inside the Obama administration as well, and it is here that the behavior of some of the president’s men and women has been somewhat questionable. Unlike former high-office holders ensconced in multimillion-dollar ivory towers off of Massachusetts Avenue NW, current government officials reporting directly to the president of the United States might consider keeping their own counsel (or at least, conveying their counsel privately), rather than publicly trying to corner Mr. Obama into endorsing a policy for which he may rightfully have reservations.

It will surprise just about no one that most aggressive lobbyist for arming Kiev among Mr. Obama’s team has been the Department of State’s Victoria Nuland. At the Munich Security conference last month, the German newspaper BILD reported that Nuland huddled with the U.S. delegation and NATO Supreme Allied Commander Philip Breedlove to strategize on ways to sell the idea of arming Kiev to the Europeans. According to the BILD report, Nuland advised the assembled that when discussing the possibility of arming Kiev, “I’d strongly urge you to use the phrase ‘defensive systems’ that we would deliver to oppose Putin’s ‘offensive systems.’” At a Senate Foreign Relations Committee hearing on March 10, Nuland again pushed the case for arming Kiev, noting that “in the last few days, we can confirm new transfers of Russian tanks, armored vehicles, heavy artillery and rocket equipment over the border to the separatists in eastern Ukraine.”

She is hardly alone. On March 3, Chairman of the Joint Chiefs Martin Dempsey testified before the Senate Armed Services Committee and expressed his openness to sending weapons to Kiev: “I think we should absolutely consider providing lethal aid…and it ought to be in the context of our NATO allies because Putin’s ultimate objective is to fracture NATO.” His boss, Secretary of Defense Ashton Carter signaled his willingness to provide weapons during his confirmation hearing, telling Senator John McCain, “We need to support the Ukrainians in defending themselves…I am inclined in the direction of providing them with arms, including . . . lethal arms.”

Not to be outdone, Director of National Intelligence James Clapper recently testified before the same committee and said that, despite the recommendations of the very agencies he oversees (and the opinion of Lt. Gen. Vincent Stewart, head of the Defense Intelligence Agency), he personally favors sending arms to Ukraine. And for his part, NATO’s Breedlove has been doing his level best to keep up the pressure on both the Europeans and the administration, having, according to an eye-opening report in Der Spiegel, established a pattern releasing what might be termed “disinformation” to the press to undermine the tenuous ceasefire. According to the report:

The pattern has become a familiar one. For months, Breedlove has been commenting on Russian activities in eastern Ukraine, speaking of troop advances on the border, the amassing of munitions and alleged columns of Russian tanks. Over and over again, Breedlove's numbers have been significantly higher than those in the possession of America's NATO allies in Europe. As such, he is playing directly into the hands of the hardliners in the US Congress and in NATO. [emphasis added]

Intra-administration squabbles over foreign policy often do go public; many recall the battles between Vance and Brzezinski during the Carter years; the differences between Weinberger and Shultz under Reagan; Powell versus, well, almost everyone under George W. Bush. But for direct reports of the president of the United States to be openly and quite publicly lobbying for a policy goal that he still has under consideration is a new and troubling development. Worse, the military, in the person of Gen. Breedlove, seems to be intentionally exaggerating claims of Russian malfeasance with the intent of stirring up alarm on Capitol Hill. And just as bad is the damage that all of this is doing to a transatlantic alliance already divided over the issue of Russian sanctions and more.