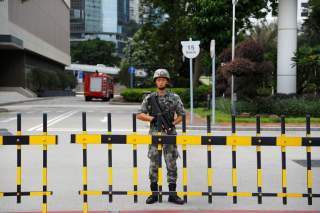 The situation in Hong Kong is disconcerting for China’s government: what started as a protest in opposition to a controversial extradition bill has morphed into nothing less than an outright revolt against the city’s indirect rule by mainland authorities. The “one country two systems” compact seems dead to demonstrators on the street who are showing up in the hundreds of thousands. These protesters are rattling Beijing by signaling a commitment to continue their activities until their demands are met—one of which is the implementation of universal suffrage. One can hardly imagine a greater nightmare scenario for the Communist Party apparatchiks in the mainland.

Yet such a possibility does exist. While much has been made of the political dimension and the implications of the protests, the economic dimension has gone under-reported. This is rather curious, since nothing else could be more pressing for China.

A local uprising, born out of fear that Hong Kong is losing its highly-valued political independence, is something that could be contained—and perhaps even reversed if significant concessions are made. At worst, the current uprising could be crushed, akin to how the Soviet Union suppressed the Hungarian Revolution of 1956. This would result in much worldwide condemnation and a sizable drop in international prestige, but for Beijing that would be an acceptable price to pay if it meant putting down a direct and highly-visible public challenge to its authority. Ensuring political survival is the primary concern of any regime after all.

If Hong Kong’s uprising is born out of discontent with the current economic situation, however, that is another matter entirely.

Modern day China is built on economic growth. It is no accident that, under President Xi Jinping, the term “Chinese Dream” has entered the political lexicon. This promise of prosperity, along with a rejuvenation in national pride, is the main source of legitimacy for the Chinese Community Party. Furthermore, if it cannot deliver on these, then, like the late Soviet Union, it won’t be long before people begin to express their dissatisfaction. From there, it is a short jump to taking to the streets in protest, and, eventually, revolt. If so, then Hong Kong might just be a prelude for what is to come.

A Tale of Two Cities

But isn’t Hong Kong an incredibly prosperous city? A global hub of international business and finance that invokes feelings of envy in the hearts of other nations? A shining example of what leaders of developing countries should aspire to build?

Maybe not quite as one would believe.

Consider as an example the city’s most pressing and ever-present problem: housing. With a mountainous territory, habitable land in Hong Kong is always at a premium. According to a report from the Economist Intelligence Unit, Hong Kong is tied with Paris and Singapore as the world’s most expensive city to live in. Yet while property prices have more than tripled in less than a decade—to the point where the average price for a flat is around $1.2 million—salaries have not kept up. In fact, last year saw a rise of only 1.9 percent after accounting for inflation. Yet almost half of the city’s rental units cost more than $2,550 a month, which is ludicrous since that is 122 percent of the local average salary. As a result, home ownership is but a distant fantasy for most of the city’s inhabitants.

The public housing situation also demonstrates how bad things are. Around 44.7 percent of the city’s inhabitants—a whopping 3.3 million people—are living in public housing. The Hong Kong Housing Authority’s own statistics reveal that, as of the end of June, there were about 256,100 applications for a subsidized apartment with an average wait time of 5.4 years. Additionally, the availability of public housing is restricted: the cutoff threshold to apply for a one-person apartment, for example, is a monthly salary of HK$11,830 (around $1,500 a month, or $18,000 a year) and a maximum net assets of HK$257,000 (around $32,760). If the threshold were raised to include a broader range of the city’s poor, the number of people in need of housing would likely be much higher. This is not surprising, given that, according to government statistics, around 20 percent of the population is living below the poverty line (before accounting for cash transfers and other aid provided social safety net programs). While waiting for public housing, households must live in infamously tiny apartments, including those with squalid conditions.

Hong Kong’s government has been slow to address this need. It has already admitted it will fail to meet its target of building 280,000 new apartments by 2027 by 43,000 units. The government also refuses to raise the public housing threshold, as that would further strain the city’s resources.

At the same time though, it is evident that the government isn’t doing everything it could be to fix the situation. Only 7 percent of the city’s land is set aside for housing, for example, while 60 percent is country parks or other green areas. While this might please the senses and bring a smile to the environmentally conscious, critics are right to point out that this situation doesn’t make sense given the depth of the housing crisis. Worse, it is clear that oftentimes government policy favors elite interests over the needs of poor residents. One instance of this is the 2018 proposal to redevelop a large 425-acre golf course into new apartment units that could house 37,000 individuals. In February of this year, the government announced that it would redevelop only a fifth of that land—never mind the fact that the golf club that owns the property only pays 3 percent of the actual market rental value, runs a deficit, and services fewer than 2,700 members. Non-members can use this prestigious golf club on most days, but that entails paying $140 to play an 18-hole round—outside the price range of most people in Hong Kong. Naturally, this means that the club’s membership is composed of the city’s wealthy elite: corporate memberships go for $2 million, while individual memberships go for around $64,000 plus monthly dues. Increasingly, these are made up of wealthy Chinese mainlanders who have moved into Hong Kong in recent years.

From the perspective of the protesters, some of these mainland Chinese immigrants are arguably a part of the problem. In integrating with the rest of China, Hong Kong opened the door to investment from the mainland. This mainland money poured into Hong Kong’s real estate market in quantities that were sometimes in defiance of Beijing’s capital controls—an indicator that this money may have originated from corrupt practices. Knight Frank, a consultancy, estimated that mainland Chinese money is responsible for buying 20 percent of the luxury condo units in Hong Kong in 2016 alone. Even Xi Jinping’s own family is involved in this: a 2012 report from Bloomberg revealed that his extended family own multiple properties across the city, including a (then) $31.5 million villa overlooking Repulse Bay.

Hong Kong has numerous other socioeconomic issues on its hands: the city’s pension fund doesn’t provide enough for retirees to survive, unemployment insurance doesn’t exist, and the health system is in dire need of fixing. All of these are long-standing issues that have gone unaddressed, and have likely help fueled the discontent towards Hong Kong’s current Beijing-approved government. But worst of all for China’s Communist Party, this uprising seems to have happened at the most inopportune time possible: in the midst of a brutal trade war with the United States.

Casualties of the Trade War

While Beijing may wish to downplay the damage that the current trade war with the United States is inflicting, the truth is that the situation is starting to look grim for China. Some signs indicate that China may already be feeling the early symptoms of an economic slowdown: official growth has fallen to its slowest pace in decades, and the unofficial numbers may be worse. Exports are decreasing, household debt is skyrocketing and supply chains are being moved out of the country. The country’s much-cherished prosperity and resulting political stability may be under threat. A broader global economic slowdown would make the situation worse.

This is where Hong Kong has long played a critical role in China’s economy. The city’s special status and powerful financial sector made it the perfect interface to connect mainland China’s relatively capital closed markets with the rest of the world’s free-flowing capital markets. In a certain sense, the city is both the first line of defense and the natural entry point into the Chinese financial system.

However, this only works so long as Hong Kong is seen as a reliable center for international finance and business. The ongoing protests, along with the broader U.S.-China trade war, might effectively put an end to Hong Kong’s prized position.

In response to the protesters, Beijing is pressuring multinational companies to keep their employees from partaking in the demonstrations or else face the consequences—namely, exclusion from participating in mainland China’s highly-lucrative markets. The world’s top four accounting firms, for example, are being pushed to dismiss employees who are in support of the protesters. Moving forward, how can anyone be sure that these companies won’t also toe the line if Beijing asks them to unquestionably support the financials of favored companies? Can any company really feel secure operating in Hong Kong knowing they may face significant public and private pressure to fulfill any requests made by state officials, even if they violate normal standards? Can the Hong Kong legal system, based upon the British common-law model, be relied upon to be impartial if Beijing undermines it to push its own preferences? Questions like these are what drives sensible firms to shift operations to another city (Singapore is the current favorite). These changes are also causing businesses to stop resorting to Hong Kong’s legal system and to instead open up bank accounts elsewhere. Investors are already pulling their money out from the city’s capital control-free financial markets.