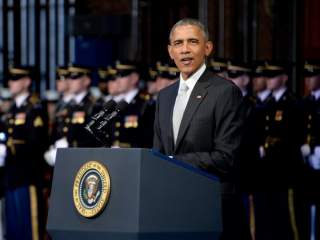 “The failure of [the administration’s] foreign policy is now clear to everyone except its architects, and even they must entertain private doubts. . .” So began Jeane Kirkpatrick’s seminal piece excoriating President Carter’s flawed foreign policy and laying the groundwork for a major strategic realignment under President Reagan; but she just as well might have been talking about President Obama as he approaches his final year in office. Rarely has a U.S. president caused so much damage in so many spheres due to such a fundamental failure in foreign policy philosophy.

In a cover story for the Atlantic this month based largely on direct interviews with President Obama, Jeffrey Goldberg lays out the “Obama Doctrine” in significant detail. The article makes clear that Obama’s philosophical failure does indeed bear an uncanny resemblance to that of the Carter administration: Fundamentally, an exaggerated sense of the limitations and constraints on U.S. power. Flowing from this has been an across-the-board unwillingness to shape events, stand up to U.S. adversaries and support U.S. friends. The consequences to U.S. interests and to the U.S. reputation have been profound and interconnected across a wide range of geographies. It is worth cataloging in order to make sure the scope of the fallout is properly understood, and so that the next president can take appropriate countermeasures to reverse the damage.

As a result of the Obama foreign policy, U.S. friends are rattled and U.S. adversaries are emboldened. But if we look for the silver lining, it is this: countries the world over, especially those that sit on the periphery of the major powers, have been given a glimpse into an alternate world in which the United States is no longer willing to provide the security guarantees that for decades have formed the bedrock of the global order. And they have not liked what they saw. The door is thus wide open for the United States to drastically recalibrate its strategic approach and return to a position of global leadership, as it must.

Before focusing on to the periphery, it is worth examining the administration’s approach to America’s major power adversaries, China and Russia, as well as to its regional adversary, Iran. Here one finds the root of the administration’s errors, and the best showcase of its inexperience and naïveté.

It may be worth noting at the outset that the term adversary is used loosely here. It does not mean to imply that relations with any of the countries so labeled must necessarily entail conflict. However, these are countries whose national interests frequently do not align with those of the United States, and who harbor ambitions that include, among other things, diminishing the power and influence of the United States in key regions of the world, while enhancing their own. One of the flaws in the Obama administration’s approach to these countries is its refusal to acknowledge this basic reality.

In its dealings with adversaries, the Obama administration from Day One took the view that a reasonable approach would be met with a reasonable response. The underlying psychology is exemplified perhaps most obviously by President Obama’s private comment, famously caught on an active microphone, assuring Russia’s then-President Medvedev that he would have “more flexibility” after his election to accommodate certain Russian concerns. The Obama administration relocated missile defense systems from the Czech Republic and Poland, thereby attempting to signal to Russia that the United States was willing to move beyond a Cold War mentality in Eastern Europe. Even when Russia invaded Ukraine, by which time it should have been amply clear to the Obama administration that its Russia strategy had failed completely, the United States still refused to provide lethal equipment to Ukraine’s military. The White House even rejected a request for certain radar capabilities, claiming privately that doing so would only increase tensions in the region and provoke further escalation by Russia. And according to recent reports, even the non-lethal equipment the United States has provided—such as Humvees—has been of such dilapidated quality that it has resulted in morale issues among Ukrainian fighters.

In the context of Ukraine, it is of course worth flagging an added important dimension, which is the Budapest Memorandum. Under this agreement, signed in 1994, Ukraine agreed to give up its entire nuclear weapons stockpile—the third largest in the world at that time—in exchange for the United States and the United Kingdom guaranteeing the country’s territorial integrity. Russia’s invasion of Ukraine, then, represented not an abstract challenge to general U.S. security commitments, but rather a very specific challenge to a contractual U.S. obligation. And yet the administration abdicated. The response at the time was surprisingly muted, with the most forceful words coming from former Secretary of State George Schultz and former Secretary of Defense William Perry, making clear in the Wall Street Journal that “American negotiators understood that this Memorandum was critical to Ukraine’s decision to give up almost 2,000 nuclear weapons.”

Meanwhile Georgia—the largest non-NATO contributor of forces to the military effort in Afghanistan and the largest contributor, period, on a per capita basis—requested defensive Javelin anti-tank missiles some time ago from the United States as a deterrent to a Russian invasion. Again, the White House blocked the approval on the grounds that doing so would constitute an unnecessary provocation.

Predictably, all of these examples of accommodation on the part of the Obama administration have had the opposite of their intended effect. They have only emboldened Russia, a country that is in a state of decline both economically and demographically, and yet its foreign policy is now resurgent. Not only in Eastern Europe, but also in Central Asia, where it has stationed more forces near Kyrgyzstan and Tajikistan to begin reasserting effective control over former Soviet states, and of course also as far afield as the Middle East, with its intervention in Syria.

The Russian encroachment into Syria is perhaps the most shocking. Not since the days of the Cold War has Russia projected power into the Middle East, which is not contiguous with Russian territory. To carry out its Syria operation, Russia positioned aircraft at a base in Latakia, Syria. Its planes regularly flew through Iraqi airspace with the permission of Baghdad, an ostensible U.S. ally in the region. This would have been one thing if Russia’s intervention in Syria were strategically synergistic with U.S. aims in the country, in effect a parallel effort to subvert and destroy ISIS. But during its first week of bombing runs in Syria, Russia made clear that was not the case: rather than hitting ISIS positions, it struck at U.S.-trained rebel forces—to the amazement of many, prompting nothing more than a verbal rebuke from the Obama administration.

The world is fully interconnected. Lessons learned in one region are heeded in others, a fact that, historically, was considered axiomatic by U.S. policymakers. During the Cold War, it was understood that a public show of weakness by the United States in one sphere would undermine U.S. credibility in all spheres, thereby unraveling the entire delicate framework of containment. With this in mind, the United States famously undertook such disparate and far-flung actions as an airlift to mobilize supplies to West Berlin in response to the Soviet Union blockade; sending U.S. troops to Vietnam to back a pro-U.S. government in the South; and supplying lethal arms to anti-Soviet forces in Afghanistan. In these and other instances, the United States was keenly aware that while each individual example may be difficult to justify on cost-benefit grounds, in their totality they sent a powerful signal that, in the immortal words of President Kennedy, the United States would “bear any burden, meet any hardship, support any friend, oppose any foe to assure the survival and the success of liberty.” This posture, in turn, would deter the Soviet Union from undertaking serious challenges anywhere and reduce the overall likelihood of conflict.

Consciously rejecting decades of foreign policy experience (and millennia of accumulated wisdom about human nature), President Obama eschewed the entire logic around signaling—and said as much in his interview with Goldberg. Yet today the importance of careful signaling is perhaps greater than ever, with the threats to U.S. interests more multi-dimensional. Because now, it is not just Russia learning lessons in one part of the world and applying those lessons elsewhere. China, too, has been carefully observing from the sidelines, and it has concluded that the Obama administration lacks seriousness when it comes to standing up for U.S. interests and U.S. allies. In recent years, China has exploited this insight with aplomb.

The Obama years have seen some of the most aggressive claims by China in the South China Sea. China has been constructing islands on reefs at a furious pace, replete with runways, radar and sonar stations, and other infrastructure that will allow China to project force well beyond its historical boundaries. The South China Sea is one of the world’s most critical waterways. Over $5 trillion of goods flow through these waters every year, much of which is destined for U.S. ports. Through its artificially constructed islands, China is now claiming that this sea—which has previously been comprised largely of international waters subject to freedom of navigation—in fact belongs to China and that passage through is subject to Chinese consent. China has also become more aggressive in respect of the Senkaku Islands, an archipelago claimed by both China and Japan, as well as deepening its influence throughout Central Asia and into the Caucasus with its Silk Road strategy.