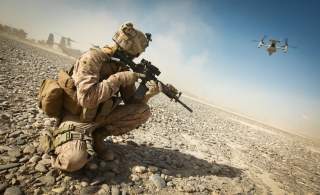 In his recent speech on the war in Afghanistan, President Donald Trump laid out what he said was a “plan for victory” and assured us that “in the end, we will win.”

For all the very considerable expense, however, the American military does not have a very impressive record of achieving victory. It has won no wars since 1945—especially if victory is defined as achieving an objective at acceptable cost—except against enemy forces that essentially didn’t exist.

It triumphed over tiny forces in Grenada—possessed of two vehicles, one of which was rented—and over scarcely organized thuggish ones in Panama and Kosovo. And, although the Iraqi opponent in the Gulf War of 1991 often looked impressive on paper, it turned out to lack quite a few rather elemental qualities: defenses, strategy, tactics, training, leadership and morale—it was, as one general put it ironically at the time, “the perfect enemy.”

There are also a few wars in which it could probably be said that the United States was ahead at the end of the first, second, or third quarter—Korea, Vietnam, Somalia, Afghanistan and Iraq. But the final results of these were certainly less than stellar: exhausted stalemate, effective defeat, hasty withdrawal and extended misery.

Trump notes that “we are already seeing dramatic results in the campaign to defeat ISIS” in Iraq and Syria, and he seems to suggest that those results can be duplicated in Afghanistan. And, indeed, foreign-policy analyst David Ignatius has suggested that in its current war against the Islamic State, the U.S. military may well have found a winning combination.

It is not at all clear that this approach has much wider potential, however. The strategy against ISIS is working because of a couple of complementary features not likely to be found in many other conflicts—including especially Afghanistan.

First, the enemy is vicious and uncompromising enough to generate an almost wall-to-wall hostility from the locals. And second, there is a sense among Americans that the enemy presents a direct threat to the United States.

In Iraq and Syria, American advisers and special-operations forces in substantial numbers are working closely in the field with the troops they advise. In addition, the Americans supply a great deal of coordinated fire support, particularly from the air. “What makes this campaign so unusual, is that U.S. forces are not providing the muscle of the frontline combat troops,” notes Linda Robinson, an analyst at the Rand Corporation. Rather, she suggests, quoting Gen. Joseph Votel, “the campaign is conducted ‘by, with, and through’ others.”

But, as Ignatius stresses, the strategy can succeed militarily in such ventures “if—and probably only if—it works with local forces who are prepared to do the fighting and dying.” And, the “surprise” has been in how motivated and disciplined the forces being supported in Iraq and Syria now are: “They’ve fought bravely, taking significant casualties,” and for the most part “have cooperated across sectarian lines.”

Such motivation and discipline was scarcely anticipated in 2014 when Islamic State attacked Mosul with the apparent intention of holding part of the city for a while in an effort to free some prisoners. The defending Iraqi army, trained by the American military at a cost to U.S. taxpayers of more than $20 billion, simply fell apart in confusion and disarray. Iraqi soldiers abandoned their weaponry, and the city, to the tiny group of invaders although they greatly outnumbered them—even taking into account the fact that many soldiers had purchased the right to avoid showing up for duty by paying half their salary to their commanders.

That changed as people got to know Islamic State better. As it grew and governed territory, its character became clearer, and that helped inspire the dedicated and disciplined opposition that Ignatius talks about. “Either we will win or they will kill us all,” as one of them puts it in the recent film, “City of Ghosts.”

Much of this was evident even in 2014. As Middle East specialist Ramzi Martini pointed out at the time, “the Islamic State’s fundamentals are weak” and its “extreme ideology, spirit of subjugation, and acts of barbarism prevent it from becoming a political venue for the masses.” The terror group’s foolhardy efforts to instill fear in everyone limits “its opportunities for alliances” and makes it “vulnerable to popular backlash.” “Its potential support across the region ranges from limited to nonexis­tent” and it “is completely isolated, encircled by enemies.” Such defects were soon to send it into decline.

The group might have been successful if it had been able to overcome such weaknesses. This would have required keeping its mindless savagery under control. And it would also have needed to make common cause with other Sunni groups in Iraq who had at the time been systematically alienated by the policies of Nouri al-Maliki, who emerged as prime minister in the wake of the surge, that, at a cost of one thousand American lives, had provided a moment of respite in the country.

However, ISIS continued to exercise what Daniel Byman has called, its “genius for making enemies” and its brutalities. The Islamic State’s staged beheadings of hostages, summary executions of prisoners, and the rape and enslavement of female captives, continued to intensify opposition to the group. In a poll conducted in Iraq in January 2016, 99 percent of Shiites and 95 percent of Sunnis expressed opposition to it.

The Islamic State’s ultimate idiocy, however, was to stage and webcast several beheadings of defenseless American hostages. Only 17 percent of the American public had advocated sending ground troops to fight ISIS after the rout in Mosul—it seemed to be yet another incomprehensible civil conflict among Iraqi factions. But the beheadings boosted support to over 40 percent, and that went even higher later. And some 60 to 70 percent of Americans soon came to view ISIS as a major security threat to the United States. Indeed, in one 2016 poll, fully 77 percent of Americans who said they had been following the news about Islamic State closely (fully 83 percent of the total) held that Islamic State presented “a serious threat to the existence or survival of the U.S.”

Such numbers suggest that there would have been public support even for a greater troop involvement. However, there was an understandable wariness that, after a decade and a half of war in the area, public-support figures might soften considerably if American casualty rates were to rise. The “by, with, and through” approach has avoided that problem—as Ignatius points out, in three years of fighting, just five Americans were killed in action in Syria and Iraq.

Military victory against Islamic State would certainly improve the American track record. And the fourth quarter in this case may well turn out better—although the danger, of course, is that fighting will break out among the victorious factions once ISIS is dispatched militarily and reduced to a terrorist group rather than a territorial menace.

But, even if that doesn’t happen, it seems unlikely that the war-fighting approach applied in Iraq and Syria will prove to be a game changer that will have wide applicability. In particular, the Taliban in Afghanistan is nothing like ISIS.

And perhaps Trump realizes this. In his speech, he repeatedly calls for “victory,” and, like other presidents and war supporters, he duly rechannels the “safe haven” myth. But he then defines “victory” as something more akin to a stalemate: “preventing the Taliban from taking over” and then perhaps negotiating.

John Mueller is a senior fellow at the Cato Institute and a political scientist at Ohio State University. Among his books are The Remnants of War and (with Mark Stewart) Chasing Ghosts: The Policing of Terrorism and the forthcoming Are We Safe Enough? Measuring and Assessing Aviation Security.