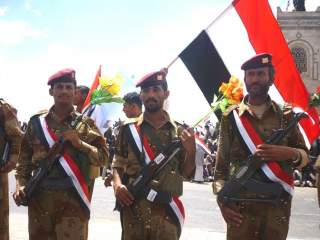 In response to pleas from Yemen’s deposed President Hadi and out of concern for the uncertainty of a Houthi-led government, Saudi Arabia announced the beginning of a bombing campaign against the tribes allied with the Houthi movement.

As the number of participants in the Saudi-led coalition increases to include Egypt, Jordan, Kuwait and even the United States and Turkey, one cannot help but hear the echoes of international intervention in the 1962 Yemen civil war.

For six years following the overthrow of the last Yemeni Imam Muhammed al-Badr in 1962, the country was locked in a bloody civil war between the newly established republic and a coalition of northern Yemeni tribes, many of the same tribes that constitute the Houthi movement today. When the beleaguered Yemeni republic appealed for foreign support, their call was answered by dozens of countries and international organizations who were willing to aid either directly with weapons and financing, or on the floors of the United Nations.

Decades before Saudi Arabia and its oil wealth emerged as a regional leader, the allegiance of the Arab World stood with Egypt, the most populous country in the Middle East. This was particularly true during the presidency of Gamal Abdel Nasser, the icon of the Arab Nationalist movement during the 1950s and 1960s. Nasser declared his unwavering dedication to this untested republic, leading foreign support and manipulating Yemen’s politics to his own benefit.

The imam and his tribes were supported by Saudi leaders who at the time perceived Nasser’s brand of Arab Nationalism as the greatest threat to their monarchy. With the support of Saudi Arabia and a small band of British and French mercenaries, the imam was able to stage a very successful guerrilla campaign against the mobilized and well-equipped Egyptian army. Nasser initially planned to send only a battalion of a few hundred soldiers in support of the revolution. By the height of the war against the northern tribes in 1965, that number reached 70,000 soldiers, nearly a third of the Egyptian army.

The Egyptian army was, however, trained for desert warfare and was ill-prepared for the mountainous terrain of northern Yemen. Aside from perhaps the terrain of Afghanistan and the winters of Russia, the mountains of Yemen are the greatest natural defense against invading armies. The tribesmen, on the other hand, had the great advantage of familiarity with this difficult terrain and were able to wreak havoc on Egyptian convoys in a particularly brutal fashion – often decapitating their victims.

The difficulties of conducting a ground war in northern Yemen led the Egyptian military to rely increasingly on its long-range artillery capabilities and its air force equipped with Soviet MiG fighters and Ilyushin bombers. The Egyptian air force ran daily bombing raids on Yemeni villages loyal to the imam and along the Yemeni border with Saudi Arabia, which was acting as a transit point for munitions and supplies to the imam’s forces.

The bombing campaign was ineffectual from a military standpoint as the tribesmen were trained to take cover at the sound of an approaching aircraft, carrying their light weapons with them. The same mountainous terrain that served as an impediment to ground troops also provided refuge to local tribesmen in the form of large and well-hidden caves that served as the makeshift headquarters of the entire guerilla operation.

As the Egyptian losses began to mount in 1966, Nasser retreated into a defensive triangle formation surrounding the three major cities of Sana’a, Ta’iz, and Hodeidah. The bombing campaign was ramped up, only this time Cairo began to employ poison gas bombs targeting the imam’s cave bases, as the gas could seep into the cave and target those seeking shelter within its walls. The imam’s northern tribes were running low on allies in the international community, as even Saudi Arabia, its principal ally, had begun looking for political alternatives in the country. Nasser understood that without international allies, Imam al-Badr would not be able to mount a successful protest against the Egyptian poison gas attacks.

The Egyptian bombing campaign had an unintended impact on tribal politics in Yemen as it increased the local popularity and support of Imam al-Badr, who was perceived as the defender of his country against foreign invaders. Although the gas attacks continued through August 1968, they served only to cover the Egyptian retreat as Nasser was forced to admit defeat after the June 1967 war with Israel and withdraw Egyptian troops from Yemen. Following a series of political compromises in 1970, the northern tribesmen and the supporters of the republic agreed to form a coalition government that has continued in some form to this day.

For those elderly Yemeni who might recall the Egyptian air raids of the 1960s, the current Saudi coalition’s bombing campaign certainly seems to echo a very dark period in modern Yemeni history. The echoes of six years of a failed Egyptian campaign in Yemen, however, seem to have escaped the ears of Saudi Arabia and their expanding coalition of Arab and Western allies. The same northern tribes are again confronting a Yemeni republic that has marginalized their population for decades, pushing them further into the periphery of domestic politics. The continued Houthi offensive can certainly be perceived as an effort to return the country to a pre-1962 style of administration dominated by the tribes of Yemen’s northern highlands. Only this time, the remnants of the republic seem to have actually fled the country, leaving few political alternatives to the Houthi movement.

Rumors and circumstantial evidence that the Iranians have been supporting the Houthis has led to a great deal of Saudi fear for the security of their southern border. The Saudis had already been bankrolling and supplying the Yemeni government’s effort to subdue the Houthi since armed clashes began in 2004. The current bombing campaign is merely the next stage in Saudi Arabia’s campaign to secure its porous southern border against hostile tribesmen from Yemen.

The Saudi coalition is not heeding the warnings from a failed Egyptian bombing campaign during the 1960s. The Houthi fighters continue to take refuge in the same system of caves. With each falling bomb, the Yemeni population grows increasingly more sympathetic for the Houthi movement which is emerging as the Yemen’s heroic defenders against foreign elements looking to destroy the country. With both Saudi Arabia and Egypt announcing their intentions to commit ground troops to the northern highlands, it seems that both countries are playing with fire and ignoring their own history of failed military interventions in Yemen.

Asher Orkaby is a Junior Research Fellow at the Crown Center for Middle East Studies at Brandeis University.