Reflections on Trump's First State Visit to the Middle East 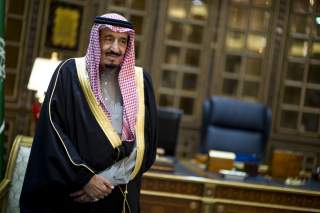 President Trump is visiting the Middle East. He will travel to Saudi Arabia and Israel, then visit the Vatican. Given the sequence of the first two, some observers speculated that he will attempt to revive the Israeli-Palestinian peace process, perhaps within a broader, regional framework. But different potential outcomes for Arab-Israeli relations, short of a peace settlement, may also be in the offing.

Both Saudi Arabia and Israel have proven themselves to be invaluable partners to the United States in the struggle against ISIS. An American-brokered framework whereby direct cooperation between the two is formalized—rather than a reliance on the United States as an intermediary—may create a framework to broaden the cooperation. Heightened partnership to counter the shared threat of Iran would be an obvious next step. The Trump administration’s new strategy is the creation of a regional alliance, focused on the Gulf countries but also including countries such as Egypt, Jordan and Morocco. A multilateral approach in which Israel plays a more direct and visible role in the coalition would signify a breakthrough. It would bolster confidence among Arab publics that broader cooperation and conflict resolution are warranted.

Donald Trump made the eradication of the Islamic State a priority during his campaign. He has been criticized for his more muscular strategy, as well as the desire to augment intelligence, economic and communications measures to put the screw to the organization.

It seems possible that the president is making a clean break with the Obama administration’s policy of disengagement from the Middle East. For Trump, the rubric of a “war on terrorism” seems to be appealing. Arabs appreciate the fact that, unlikely his predecessor, Trump appears to be recognizing the Shia extremist terror threat as represented by Iran and its proxy militias alongside the widely recognized Sunni jihadist threat.

In the view of this administration, this alliance should function like NATO, as an alliance (perhaps supported by the West) with multiple objectives. The eradication of Islamic State is the main objective, but the containment of Iranian influence in the region is also on the menu.

The use of a massively powerful bomb against the Islamic State in Afghanistan provided a mighty demonstration of strength, but may also have been intended to send a message about the president’s commitment to confront his adversaries with some of the most powerful tools in his arsenal.

But of course, matters are not so simple.

At the geostrategic level, Russia and the pro-Iranian Shia arc cannot be ignored politically. The alliance between the two poses layers of complexity, whereby American and Russian accounts in the Baltic states and vis à vis NATO may be dragged into the diplomatic mix. Moscow cannot be excluded from the equation in any prospective political resolution in Syria. As for Iran, Russia wields heavy influence on its government and its security sector. Trump faces a Twister-like game of challenges in navigating the array of alliances, rivalries and hostilities among the players. Yet his aspiration to eradicate the Islamic State and block Iranian expansion in the region depends on his effective management of these quandaries.

Nor do Trump’s aspirations allow for neglect of the broader counterterrorism challenge beyond military action, intelligence work and even diplomacy. He must wage an ideological war, and challenge extremist strands within Arab and Islamic societies that guarantee the perpetuation of conflict—whatever the outcomes on the battlefield—unless they are addressed.

The Trump administration, working alongside its Arab allies, should promote moderate or quietist forms of Islam, and not remain neutral on religious matters. This means working with Islamic leaders, many of whom are state-funded imams, to challenge jihad on a religious basis and offer a form of faith shorn of violence.

These strategic insights come together in Morocco, where King Mohammed VI has used his religious role as commander of the faithful to inspire religious leaders to combat jihadism and urge tolerance and peace.

King Mohammed VI has demonstrated his commitment to deeper cooperation with neighboring countries by embarking on several state visits and signing an unprecedented number of economic-partnership conventions. He has also expressed support for joint efforts to combat radicalization, and officials from Cote d’Ivoire, Niger, Tunisia, and Guinea have indicated a willingness to train their imams in Morocco.

If Trump is looking for a healthy example of Muslim leaders bringing peace through Islam, Morocco is a good place to start.

Image: King Salman of Saudi Arabia in 2013. Flickr/Secretary of Defense