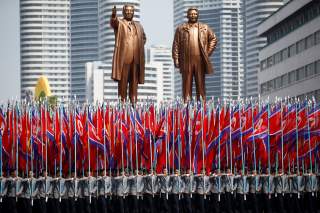 On August 29, Pyongyang launched an intermediate-range ballistic missile in a northeasterly direction, over Japan into the Pacific Ocean. Kim’s regime lobbed it to the east, over Hokkaido and into the Pacific, rather than on a southward path toward Guam; apparently Kim sought to test its flight on a normal trajectory without crossing the “red line” of aiming at the United States.

But contrary to Kim’s expectations, Trump said “all options are on the table,” a euphemism for implicitly threatening to use force. After all, North Korea had just launched a barrage of missiles on August 28, less than one week after Secretary of State Rex Tillerson praised the country for showing “restraint” in its weapons program. Pyongyang fired three short-range ballistic missiles from the Kangwon Province, according to U.S. Pacific Command. The launches occurred in the midst of the United States and South Korea’s annual Ulchi Freedom Guardian military exercises, according to CNN.

Additionally, Reuters reported on August 21 that two North Korean shipments to a Syrian government agency responsible for the country’s chemical-weapons program had been intercepted within the past six months. The incidents were documented in a confidential United Nations report on North Korea sanctions violations.

That same day, CNBC reported that the Ulchi Freedom Guardian drills would run through August 31. The exercises will be the first large-scale military drills between Seoul and Washington since Pyongyang successfully flight-tested two intercontinental ballistic missiles in July and threatened to bracket Guam with intermediate range ballistic missile fire earlier in August, according to CNBC.

About a week earlier, on August 15, National Security Council Advisor H. R. McMaster said that U.S. missile defenses would shoot down any of Pyongyang’s missiles headed toward Guam, the western Pacific island where the United States operates a critical Air Force base, according to Reuters. And Tokyo said it had the capacity and will to do the same for missiles flying close to Japan.

Otherwise, there has not been an increase in deployment of American forces to the region, and soon-to-be held military exercises with Seoul are an annual event. Nevertheless, expect Pyongyang to respond with threats of another nuclear test or missile launch, absent the renewal of negotiations.

On the same day, Kim Jong-un made what appeared to be a credible threat, but in reality may be an implicit offer to place on the negotiating table a willingness to bargain away his missiles—perhaps in exchange for U.S. recognition and an explicit commitment to forego regime change in Pyongyang. He delayed a decision on firing missiles toward Guam and said he would watch U.S. actions a bit longer, according to Reuters. Moreover, Kim Jong-un has neither called up his reserves nor mobilized forces. Our take is that he wants Washington to treat him with respect as a leader.

Hark back to August 8. During the early afternoon, citing the Defense Intelligence Agency, the Washington Post reported that North Korea successfully produced a miniaturized nuclear warhead that could fit inside its missiles and Pyongyang had about sixty nuclear weapons. Later that day, President Trump made a deterrent threat, “North Korea best not make any more threats to the United States. They will be met with fire and fury and frankly power, the likes of which this world has never seen before.” But the August 9 headline in the  New York Times read, “Trump’s Threat to North Korea Was Improvised.” That is, the threat had not been a product of an interagency review or advocated by any of his senior advisors.

Trump does consult Defense Secretary Jim Mattis, who later reinforced the president’s threat by stating that North Korea “will continue to be grossly overmatched by ours” and that Pyongyang would lose any arms race or conflict that it dared to start with the United States, according to the Washington Post of August 9. Mattis even warned that an “end of the regime and destruction of the people,” which is a very strong endorsement of the Trump threat. Escalation through miscalculation might be the result of competing threats and counterthreats. Think World War I and the Guns of August.

Also, on August 8, Kim Jong-un, speaking via a low-level military officer, countered Trump, according to The New York Times. North Korea warned it was considering a missile strike that would create “an enveloping fire” around Guam.

At issue is the target of the Trump threat: Beijing, Pyongyang, both? Our take is the threat was primarily directed toward China, which Trump was interested in getting to ratchet up the pressure on Pyongyang via embargoing much-needed imports to the Hermit Kingdom.

After a month of negotiations, the United States reached a deal with China, North Korea’s main trading partner, on measures increasing pressure on Pyongyang to halt its missile and nuclear tests; the vote in the UN Security Council was held August 5 on a draft resolution ably presented by U.S. ambassador Nikki Haley.

Resolution 2371, which was adopted unanimously, strengthens UN sanctions on North Korea in response to two intercontinental ballistic missile (ICBM) tests conducted on July 3 and July 28. “This resolution is the single largest economic sanctions package ever leveled against the North Korean regime,” Haley said. “The price the North Korean leadership will pay for its continued nuclear and missile development will be the loss of one-third of its exports and hard currency.”

The Trump administration deserves credit for refraining from following a “one shoe fits all” policy toward regime change in Pyongyang (which is not on the table now nor soon) and Tehran (worth consideration now). That said, the debate within Team Trump continues. While President Trump tweets his disappointment with China’s inaction and CIA Director Mike Pompeo hints the Washington should work toward the overthrow of Kim Jong-un, America’s leading diplomat offers cooperation to reduce the risk of a crisis on China’s doorstep, according to a July 31 Wall Street Journal report.

But returning from Guam on August 9, Tillerson reaffirmed Trump’s tough talk, while he also provided reassuring words to Pyongyang, according to the Washington Post. The stick of tough multilateral UN sanctions and carrot of a unilateral conversation between U.S. and North Korea representatives could be elements for achieving a deal. And the president’s signature (albeit reluctantly) of congressional-initiated sanctions by Washington adds further pressure on Pyongyang.

On August 2, Trump signed into law, “Countering America’s Adversaries Through Sanctions Act.” It aims to punish Moscow, Pyongyang and Tehran. The signing statement suggests that Trump sides with Pompeo over Tillerson in their bureaucratic battle over policy. Again, not so fast, for Tillerson knows Trump believes the regime-change efforts of Bush in Iraq and Obama in Libya did not enhance U.S. security and were costly in both blood and treasure. Pompeo likewise knows Trump will support covert actions to undermine Pyongyang’s nuclear weapons and ballistic missile ambitions, but such actions are not green lights for regime change with its myriad unforeseeable consequences. Now to discuss regime change in Tehran.

Tanter posted in the Hill on August 1, saying the Iran policy review being conducted by Trump’s National Security Council should include regime change from within.

Like North Korea, which has become a nuclear-armed state with a potential capability to strike American cites, Iran is likely to have those capabilities after a few years of determined effort. Unlike North Korea, with no signs of an active or substantial antiregime movement, regime change from within Iran can be a tool in the administration’s toolbox. An organized opposition to the Iranian regime already exists, and regime change could include the National Council of Resistance of Iran in a principal role. Rep. Ted Poe’s July 31 piece in the National Interest concurs with this view.

One aspect of the nascent Trump doctrine is for an adversary to guess what he might do; hence, Trump needs multiple options to counter that adversary. In fact, Trump adopted a new strategy in his August 21 speech at Fort Myer, Arlington, Virginia.

Trump’s national-security team is well-advised to provide multiple options to him. When Secretary Tillerson provided only one option to certify that Iran is in accord with U.S. law and terms of the nuclear deal, the president felt boxed into accepting certification.

The final shape of the Trump “all options are on the table” doctrine will continue to develop through the end of his presidency. For now, the essence is “don’t reveal your intentions to opponents.”