Relabeling: How to Diminish Armenian-Turkish Tensions 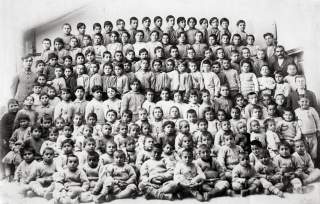 It is late April, which means the annual drama between Armenians and Turks is about to begin. As happens every year, Armenians around the world will passionately demand that Turkey admit its crimes during World War I were genocidal, and Turks will deny it with equal vehemence.

Since this is the hundred-year anniversary of the events in question, the issue will receive increased attention. Partisans on both sides will present familiar, detailed arguments. Pro-Armenian resolutions will be introduced in the U.S. House of Representatives. The State Department will reiterate its neutrality, and hope that it all goes away. The issue is as predictable as it is intractable.

For a hundred years, Armenians and Turks have been arguing over how to classify the horrible events that took place during World War I. The very identity of Armenians, both at home and in the diaspora, has become attached to gaining global recognition of their ancestors’ suffering. Turks are equally passionate about denying that their government committed genocide. Largely as a result of this disagreement, the two neighbors carry on no formal diplomatic relations. As is so often the case, the past is poisoning the present.

A potential solution does exist. It will not prove popular with either side, at least at first, but there is no other way that the passions surrounding this issue can be calmed, and reason can return to their relationship.

For decades, crimes against humanity were generally viewed in black-and-white terms, as either genocide or not. This began to change in the 1990s, when a new term entered the lexicon of international politics. During the Bosnian civil war, as ethnic Serbs tried to expel the country’s Muslim population, the slaughter reminded a great many people of the genocides of the past. Scenes of emaciated men in concentration camps drew natural comparisons with the Holocaust. The events seemed a bit different, however: While Serb violence aimed to expel the Bosnian Muslims, the Nazis simply wanted the Jews dead.

Political scientists began referring to forced expulsion of a population as “ethnic cleansing,” which is similar, but not identical, to genocide. Both are major crimes against humanity, and unforgivable violations of basic human rights. They both lead to widespread suffering and enormous numbers of innocent deaths. But they are different, and that difference has important implications for our understanding of 1915.

While the perpetrators of genocide want their enemies dead, ethnic cleansers want their enemies out. Tremendous violence typically accompanies the process of expulsion, but the end is fundamentally different, even if the means often look similar. The Nazis committed genocide because their Final Solution to the Jewish problem was to kill, not to expel. Jews were herded like cattle into ghettos and hunted down if they fled. In 1994, Hutu extremists did not want Tutsis out of Rwanda. They wanted Tutsis dead.

The events in Darfur a decade ago were different. Although U.S. Secretary of State Colin Powell was the first to label the violence in Darfur “genocide,” he was incorrect, technically speaking. The primary goal of the murderous Janjaweed militias was not to kill all the Darfuris. It was to drive them out. They burned villages and slaughtered civilians in the hope of sending messages to nearby villages, many of which were heeded. Thousands of refugees still live in camps in nearby Chad, understandably reluctant to return. It was ethnic cleansing, not genocide.

A century ago, the Turkish government was reeling from a series of battlefield disasters. It accused its Armenian minority of conspiring with the hated Russians, and decided to deport them all and expropriate their lands and property. Over the course of the next few months, Turkish troops uprooted ancient communities and marched the inhabitants away, killing untold numbers in the process. They made little or no attempt to provide food or shelter for the people they were deporting, hundreds of thousands of whom succumbed to starvation, exposure and disease. It was as brutal a policy as can be imagined, a major crime against humanity, one the Turkish government has never acknowledged. But it was ethnic cleansing, rather than genocide.

Relabeling the events of 1915 is likely to please neither Armenians, nor Turks. Since ethnic cleansing does not seem to carry with it the same degree of evil that genocide does, Armenians are not likely to be fully satisfied. And it is probably still too much of a war crime to be accepted by Turkish people. But perhaps it could help both sides reach an accommodation, if not yet a reconciliation.

It is of course hardly clear that either side actually wants to reach such an accommodation. Armenians and Turks want to win the argument. Both sides want to have their version of history accepted and their essential identity validated by the international community. Victory is the key to their satisfaction, not compromise.

Compromises by nature do not fully please anyone. However, labeling the events “ethnic cleansing” could perhaps begin to diffuse the dangerous passions on both sides, allowing these two neighbors to begin to put the past behind them and move forward. Perhaps this compromise rhetoric, in addition to being accurate, could help make the next hundred years of relations better than the last.

Christopher J. Fettweis is associate professor of political science at Tulane University. His most recent book is The Pathologies of Power: Fear, Honor, Glory and Hubris in U.S. Foreign Policy, published by Cambridge University Press.