Relations between America and Russia Are Failing. Here's a Path Forward. 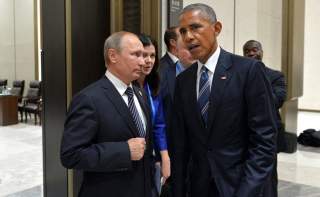 The current deep crisis in U.S.-Russian relations has become a serious challenge to global security. It is difficult to exaggerate the importance of understanding this crisis. For years, a historic perspective has defined this understanding. Since the end of the Cold War, arguably the greatest ideological face-off in the history of humankind, bilateral relations are still viewed through the prism of competition between the Soviet Union and the United States. Cold War veterans and experts, whose training was based on the experience of the Cold War, continued to use outdated narratives to analyze the relations between Washington and Moscow. There is no doubt that history is important, but what is more important is an objective picture of U.S.-Russian relations in the twenty-first century.

Relations between the United States and Russia are unique and crucial to the destiny of humankind: both countries have enough nuclear weapons to end the life on Earth several times over, and any disagreement that even slightly increases the chances of military conflict between them should be of concern. That said, it is even more important to acknowledge that there is no significant content or substance in the countries’ bilateral relations today. It is not only because of the drastic deterioration in relations over the last years; there had not been much content before that.

Economically, over the last several decades, neither country was among the other’s largest partners, whether in terms of trade or investment. Politically, there are no issues in either country’s domestic politics where the other power would play an important role and, therefore, there are no influential parties lobbying for possible cooperation. Certainly, especially lately, we have seen plenty attempts on both sides to consolidate elites and masses based on, respectively, anti-American or anti-Russian slogans. However, by definition, these attempts do not bring any positive or substantial agenda to the countries’ bilateral relations.

Socially, with the significant scale of the interaction between the two peoples, there are not enough of these interactions to make leaders of both countries think that, if not cooperation, then at least sustaining bilateral relations is desirable. Culturally, there are no strong bonds between the two countries, as exist, for example, between the United States and the English-speaking countries or between Russia and the post-Soviet space.

Undoubtedly, in every sphere where relations between the two powers could be stronger, several examples of significant cooperation can be found. Despite that, the main question remains: is there enough of this cooperation to attract effective support from leaders in the two countries, and eventually to make these relations stronger? So far, the answer has been a definitive “no.” Again, one should consider not the showdown of the last years, but the development of U.S.-Russian relations in previous decades—at least the “Reset” policy and its fate.

The lack of content and substance in U.S.-Russian relations can be considered from many different angles. Many academic conferences could be organized on the reasons, culprits and consequences of this state of affairs. But the acknowledgement of this substantive deficit is the first step in understanding of the current confrontation between Moscow and Washington. Besides fierce criticism of Russia, outright Russophobia, recitations of threats allegedly instigated by Russia’s policies, and warnings to Moscow, Russia has been mostly absent from U.S. foreign policy documents for years. This is of no surprise. We could list several reasons why countries come to prominence in U.S. foreign policy or, at least, in general American foreign-policy discourse.

First, the United States ought to cultivate historic, significant bonds with other countries. Second, American leaders and citizens already have an interest in their immediate neighbors. Third, there exist serious economic reasons to develop bilateral relations. Fourth, a sizeable and influential diaspora inside the United States can lobby for the development of relations. Fifth, some countries hold cultural interest for Americans.

Similar reasons define the development of relations between most countries. In the case of the United States, they are just more obvious and, more importantly, the number of countries that have strong relations with the United States for the aforementioned reasons is relatively small. The United Kingdom has been the United States’ historical partner and closest ally. Relations with the United States’ two immediate neighbors—Canada and Mexico—are of such high importance that they can be almost considered a part of U.S. domestic politics. U.S.-Chinese economic cooperation is crucially important for both countries. American relations with Israel and India are strong, to a significant degree because of consistent effort by Jewish and Indian Americans. French cuisine and Japanese martial arts provide for strong U.S. cultural interest in these countries.

Several other countries can be added to this list. However, it is very difficult at first glance to find a reason why Russia would be interesting to the United States even without geopolitical differences between Washington and Moscow. The older generation of American experts on Russia used to name Russian literature, music, ballet and theater—all provoking significant interest in the United States—as a possible foundation for a successful Russian soft-power campaign. But two main difficulties cause this campaign to have few if any positive results for U.S.-Russian relations. First, the modern Russia is no longer the country of Dostoevsky and Tolstoy. Second, such a soft-power campaign would not have much effect outside of that part of the American intellectual elite that is already interested in Russian culture.

Similar logic applies to the development of U.S.-Russian relations as seen from Moscow: there are not enough clear reasons for decisionmakers in Moscow to consider these relations important for Russia. Furthermore, U.S. actions in the regions that the Russian leadership considers to be zones of vital Russian national interest, especially the post-Soviet space, have provoked deep resentment and frustration in Moscow. Regardless of these animosities, there is a doctrinal difference that may allow a for positive change in the current hostile dynamic: the Concept of the Foreign Policy of the Russian Federation—the doctrinal document on which Russia’s foreign policy is based—states that Russia is ready and open to the development of bilateral ties and even to a partnership with the United States. This is hard to implement, however, without there being meaningful content to the relationship between the two countries, not to mention the current crisis in bilateral relations.

To sum up, the prognosis of relations between the United States and Russia is far from optimistic. Still, a diagnosis should at least be made and acknowledged by experts, if not decisionmakers, of both countries. So far, there are not many specialists ready to share this view. The question arises: what is next for U.S.-Russia relations?

Here, surprisingly, we can expect the United States to be more active in engaging with Moscow. If Washington continues to pretend that the United States is the only superpower capable of and eager to address a wide range of global challenges, sooner rather than later it might find itself in a position where interaction with Russia, if not a formal arrangement, is necessary. Syria is the clearest example of this dynamic. Arguably, John Kerry and Sergey Lavrov are talking not because they are trying to solve many differences between two countries, but because the United States, still considered by many to be a dominant player in the Middle East, needs to address the situation in Syria, and it is impossible to do without dealing with Moscow.

This case is not unique. Furthermore, one could predict that the number of similar situations will increase, at the very least in the Middle East, but also in other regions, as well on various global issues, for example, nuclear nonproliferation or the functioning of global energy markets (both the United States and Russia being energy exporters).

The need for Washington to deal with Russia while resolving issues of importance to the United States will determine U.S.-Russian relations. And it is still an open question how Moscow will react to this. Despite Western experts’ assurances that Russia conducts a policy of spoiling American efforts, we can assume that, even if this Russian policy exists—which has not been proven—Moscow will not act against its own interests. This fact leaves space for compromises and a path to the normalization of relations between the United States and Russia. Arguably, this could be the only way forward for relations between two countries that, currently, lack a source of stability.