Relax, Iran Is Not Taking Over the Middle East 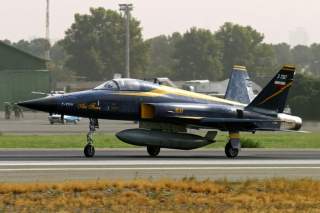 Critics of U.S. nuclear negotiations with Iran have focused on Iran’s regional policies as a framework for the negotiations. Some argue that the Obama administration has “conceded” the Middle East to Iranian influence. Others unconvincingly argue that Iran is creating a new “empire” in the Middle East. For the most part, the critics argue that a nuclear deal that leaves Iran with the ability to enrich uranium somehow permits it to establish itself as the paramount power in the Middle East. However, most of these arguments fail to consider the reasons for Iran’s influence in the region.

The nuclear program, which has cost Iran tens of billions of dollars through sanctions, has hardly been a boon to Iranian power. Rather, the U.S. invasion of Iraq, the Arab uprisings, and the collapse of weaker regional states have allowed Iran to fill the regional vacuum. But Iran is not alone in this. Tehran faces competing powers such as Saudi Arabia and Turkey, both of which are also expanding their influence, and not always in line with U.S. interests. The corrosion of state authority in the region is hardly just due to Iran’s “malign” influence. Nevertheless, Iran does pose certain challenges to the United States, and devising the right approach to dealing with them should remain a key focus. This effort must begin by first identifying key American interests.

Tying the current nuclear negotiations to Iran’s foreign policies is deeply problematic. For starters, key decision-makers in Iran, especially the conservatives, view the nuclear negotiations as a ploy to roll back Iran’s regional influence, a possible first step in challenging the regime’s hold on power at home. Iran’s national security establishment would like to see Iran fight its enemies, especially the United States, far away from its borders. At this point, challenging Iran’s regional position too aggressively would raise opposition to nuclear negotiations in Tehran. Many Americans who argue for more aggressive U.S. action believe that Iran only responds to pressure, and that pressuring it in Syria, Iraq, and Yemen would force the regime to concede on the nuclear program. However, the reverse is more likely to be true.

Supreme Leader Ayatollah Ali Khamenei has been supportive of President Hassan Rouhani’s efforts to decrease Iran’s diplomatic isolation and repair its economy. In essence, Khamenei is giving Rouhani a chance to use diplomacy to protect Iran’s interests. But if he sees Iran’s regional position under wholesale pressure, he is still willing to consider a policy of “resistance” in which Iran does not concede on the nuclear program and does not change its regional policies. Khamenei believes that the United States, along with Saudi Arabia, Turkey, and Israel, are eager to defeat Iran as a regional power and then overthrow the Islamic regime. He would be unwilling to concede Iran’s position in the Middle East, even if Iran comes under total sanctions.

Furthermore, Iran is not the sole shaper of events in the Middle East and cannot be blamed alone for all regional instability. While Saudi Arabia is a close U.S. ally, its rivalry with Iran is fueling much of the sectarian conflict in the region. The Saudis perceive Iran as a distinct and dangerous challenge to their legitimacy. But Iran also views Saudi Arabia as inherently biased against the Shia; so no matter what Tehran does, Riyadh is likely to oppose it because of its Shia and Persian characteristics.

This is not to say that Iran’s post-revolutionary policy of destabilizing Sunni monarchies is not to blame for the current state of hostilities. Rather, portraying Iran as the sole mechanism of regional instability is rather simplistic. Iran is reacting to regional events – Saudi opposition to Iran, the rise of the Islamic State, Turkish and Saudi funding of insurgents in Syria – as much as it is shaping them.

Finally, it is important to identify vital American interests vis-à-vis Iran and the wider region before considering policies aimed at curbing Iranian influence. In some cases, pushing back against Iranian influence may jeopardize U.S. interests. For example, in order to roll back Iran’s power in Iraq, Washington would have to weaken if not disenfranchise the government it helped bring to power in Baghdad. In Syria, a U.S. military intervention could overthrow the Assad regime, but would not solve the sectarianism driving the civil war. If anything, an aggressive push against Assad would convince Iran and its Shia allies to redouble their efforts against Sunni insurgents.

Diminishing Iran’s influence in Yemen is also not a vital American interest, especially as the Zaidi Houthis (belonging to a branch of Shi’ism) are fighting Al Qaeda in the Arabian Peninsula, which is a growing force in Yemen. Iran did not bring the Houthis to power in Yemen. The local conditions existed for their empowerment, and Iran smartly jumped on the bandwagon. Could the United States have prevented this outcome? Arguably, yes, but with a tremendous political and military effort that would have created yet another long-term enemy for the United States without guaranteeing an end to Iran’s influence in Yemen.

The fact of the matter is Iran will be a regional power in the Middle East for years to come. This does not mean that the United States should give up in the face of Iranian ambitions. It remains to be seen whether a nuclear deal can lead to better U.S.-Iran relations and a positive change in Iranian foreign policy. Much depends on the internal balance of power between Rouhani’s government and conservative forces.

But nuclear negotiations should not be held hostage to all of the things Iran may be doing right or wrong. The conflicts in the Middle East are much more complex than “Iran on the march” theories would have us believe. A diplomatic resolution of the nuclear issue can allow Washington more room to deal with Iran’s regional influence, either through further diplomatic engagement, economic pressure or enticement, military deterrence, or a combination of all of the above.