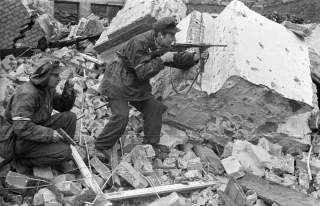 Much like the lead up to that previous paroxysm of European violence whose centenary we mark on August 4, the lead up to the Second World War saw a proliferation of alliances in anticipation of a revisionist German challenge. The French sealed a military alliance with Poland as early as 1921; this was strengthened by a commitment of mutual assistance in the Treaty of Locarno in 1925, which also committed France to the protection of Czechoslovakia in the event of a German attack and bound Britain to France. In the aftermath of the Munich Crisis of 1938, the British and Polish governments signed reciprocal guarantees in the spring of 1939, and they undertook to sign the Anglo-Polish Treaty of Mutual Assistance just two days after the announcement of the Nazi-Soviet Pact of August 23. A secret protocol contained within the former named Germany as its object.

The agreements proved to be of nugatory deterrent value and within a month, both Germany and the USSR had invaded the Second Polish Republic, which was, in the words of a British historian, “foully murdered by two assailants acting in collusion.” Indeed, even while the fighting was going on (the Poles did not capitulate until October 6), the two invaders held a joint victory parade at Brest-Litovsk and by September 28, had signed a German-Soviet Treaty of Friendship, Demarcation and Cooperation—“cooperation” being the operative word, because the Treaty had provisions that provided for the two countries to work together to undermine the Polish resistance, which would grow to become the largest in all of Nazi-occupied Europe. By September 30, the Underground Polish government-in-exile had been formed under the leadership General Władysław Sikorski.

And while just shy of two years later the Soviets would be compelled to switch sides, it would not be the last time the two totalitarian states, aptly described by Evelyn Waugh as “huge and hateful”, would act in concert. Five years into the war, the ancient Polish capital of Warsaw would meet a tragic fate, only this time with the Germans and Soviets acting in tacit, rather than overt, cooperation.

The launch of Hitler’s Operation Barbarossa on June 22, 1941 put an end to what can only be described as a fruitful period of Nazi-Soviet cooperation, during which both sides traded political prisoners, dealt in commerce and built on what they began by splitting Poland; the Soviets took control of the Baltics, attacked Finland and Romania, while Hitler moved to conquer Western Europe with rather more ease than perhaps even he had expected.

Into the summer of 1944, as the Soviet advance on Berlin accelerated (they crossed the River Bug into German-held Polish territory on July 19), the time for the long-awaited Rising (or Operation Tempest)—to be led by the Polish Home Army (Armia Krajowa) in Warsaw—seemed to its commander Bor-Komorowski, to be at hand. The primary dilemma Bor-Komorowski faced was one of timing; according to the eminent historian of Poland, Norman Davies “the only moment for a successful Rising would lie in a short interval of two or three days,” during which the Germans had begun their retreat, but before the Soviets could arrive in the city.

The assumption was that (though Stalin had opportunistically and cynically broken off relations with the Polish government-in-exile in April 1943 over the Katyn revelations) once the Rising had begun, the Soviets would come to the aid of the Home Army and help them drive the Germans from the capital. This was assumed with good reason: Soviet tanks had been spotted in Warsaw’s Praga district, on the eastern bank of the Vistula. On July 30, the Stalinist Lublin Committee broadcast the following:

Soviet troops are attacking fiercely. People of Warsaw! To arms! Help the Red Army in the crossing of the Vistula!

A further assumption, that the Rising would receive material support from its principal allies, Great Britain and the United States, was not without basis. That June, Sikorski’s successor (Sikorski had died the previous summer in a plane crash off of Gibraltar), Stanislaw Mikolajczyk, traveled to Washington to seek support for—and appeared to receive—substantial moral and material support for the Rising; FDR met with Premier Mikolajczyk multiple times and approved an $8.5 million grant to support the effort. Mikolajczyk also recalled FDR’s encouraging him “not to worry” about Stalin “because he knows the United States government stands solidly behind you.” Churchill also signaled his enthusiasm for the operation. Nevertheless, even in the absence of monetary aid and words of support from London and Washington, the Rising probably would have happened regardless, because, as the chief delegate of the Underground government in Warsaw explained later, “we wanted to be free and to owe this freedom to nobody but ourselves.”

The evening the Rising commenced, August 1, a mid-level State Department diplomat then serving as an assistant to the Ambassador in Moscow reflected on a dinner he had had the night before with the by-now-peripatetic Mikolajczyk. The experience left him in a (familiar) state of despair:

I wished that instead of mumbling words of official optimism we had had the judgment and the good taste to bow our heads in silence before the tragedy of a people who have been our allies, who we have saved from our enemies, and whom we cannot save from our friends.

As it was to be throughout the sixty-three-day battle, there was little good news to report after the initial round of fighting. According to the historian Halik Kochanski, the Home Army’s efforts to retake the airports and capture the bridges and main thoroughfares all failed. Its attacks on the police and Gestapo headquarters, and its attempts to cut German lines of communication also failed. Yet one important victory from the early days of fighting was recorded at Concentration Camp Warsaw where 348 remaining Jewish prisoners were liberated by the Home Army, about a third of the liberated went on to join the Rising, and fought, according to a Home Army regular, “with complete indifference to life or death.”

Enraged by the Rising, Hitler ordered that Warsaw be “wiped from the face of the Earth, all the inhabitants were to be killed, there were to be no prisoners.” The SS acted accordingly: on August 5 and 6, some 40,000 civilians were massacred in the Wola District alone.

The novelist and Solidarity activist Andrzej Szczypiorski was fourteen years old at the time. Equipped with only a pre-WWI vintage rifle, he fought on the barricades from August 1 to September 2, when he was captured and sent to concentration camp Sachsenhausen-Oranienburg. His eyewitness account testifies to the savagery inflicted on the Varsovians:

…the Germans gave no quarter even to women, old people or children. The German tanks storming the insurgents’ barricades were screened from fire by a simple and effective method: the Germans drove women and children forward in front of the tanks.

As Soviet tanks sat idly on the opposite bank of the Vistula, Stalin repeatedly turned down allied requests to assist the Poles. He rebuffed a plea for assistance from Churchill on August 16 and a joint appeal from Churchill and FDR on the 20th. Direct requests to the Soviets from the Poles themselves were either ignored or refused outright. Airdrops by the Soviets (who controlled six airfields on Polish territory) only began on September 13. Stalin described the leaders of the Rising, in his weird Communist patois, alternately as “adventurers” or “power-seeking criminals.” A final plea from Bor-Komorowski to the Soviet commander sitting in Praga on September 29 received no response; he was forced to capitulate to the Germans three days later.

The losses were horrendous. Civilian casualty figures are estimated to have been between 150,000-200,000. According to Kochanski, the Home Army, which was comprised of 40,000 men at the start of the Rising, suffered a casualty rate of over 50 percent. A week after the capitulation, Heinrich Himmler gave the order to destroy Warsaw “brick by brick.” According to Yale’s Timothy Snyder: “No other European capital suffered such a fate: destroyed physically, and bereft of about half of its population.”

The massive loss of life coupled with the total destruction of their city, engendered, quite understandably, a feeling of bitterness toward the Rising in some of the survivors. Czeslaw Milosz recalls walking through the rubble of the city with his friend (the novelist Jerzy Andrzejewski, who appeared in The Captive Mind as Alpha the Moralist) feeling “as did all those who survived, one dominant emotion: anger.” Milosz, surely not alone, wondered, “in the name of what future, in the name of what order, were young people dying every day?” Twenty years later, this time in the role of interlocutor in the poet Aleksander Wat’s spoken-word memoir, My Century, Milosz draws out Wat’s shared disgust over the seemingly futile sacrifice of Warsaw’s children during the Rising:

Wat: That’s the Polish magical mentality. Sacrifice the children…so that the nation will endure to create a legend.

Milosz: I saw plenty of that during the occupation.