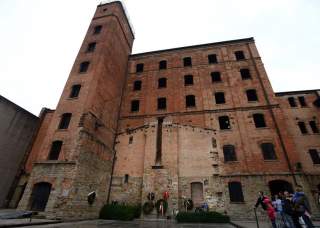 CLAUDIO MAGRIS is an academic from Trieste, the quintessential Central European city, though located on the Adriatic Sea. Every spot along the Danube—every hillside baroque dome he sees—provides an opportunity for Magris, born in 1939, to unleash a lifetime of learning about Germanic Europe on the page. After buying Magris’s book Danube: A Journey Through the Landscape, History, and Culture of Central Europe, which first appeared in Italian in 1986, in a bookstore in Geneva in the mid-1990s, I became infatuated with it. Years later, I traveled to Trieste to meet Magris at his favorite cafe, the San Marco, where Italian intellectuals once plotted against the Habsburg Empire.

The San Marco is a place where time is savored and nobody looks at their watches, amid fleshy marble tables and theatrical mask paintings hung inside gold medallions. Magris has a worn, sculpted face and his eyes flare as he talks, replacing the need for gestures. “There was always nationalism,” he explained to me, which could be liberal, like in the nineteenth century, “but it was only after nationalism was forced inside formal and bureaucratic national states” that it became illiberal. We talked about central Europe, which he says was originally sustained by a “borderless fusion of German and Jewish culture.” Thus, Hitler’s destruction of the Jews effectively finished off Mitteleuropa. Magris went on to discuss the plethora of upheavals in Trieste and in the nearby Istrian Peninsula, where Italian, Slovene and Croat populations once intermingled peacefully until the creation of modern states with their straitjackets of ethnic identity. World War II and the decade following saw ethnic cleansing, mass deportations and population movements as fascist Italy and an emerging, communist Yugoslavia jostled for territory. All are an integral part of Magris’s world, one of beautiful landscapes and wrenching human suffering. And because the travel genre cannot contain all of what he knows, he also writes novels.

His most recent novel, published this year in English, is Blameless. It examines a man obsessively devoted to establishing a museum of war in order to promote peace—calling it “Ares for Irene,” in an allusion to Greek mythology. The man’s curator, a woman named Luisa, is a descendant of both Jewish victims of exile and black victims of slavery. This black-Jewish woman worries that the museum collection, carrying with it the “neon-lit” promise of night, and intended to save humanity from repeating its tragic and violent past, will only romanticize evil atrocities. In telling this story, in which Luisa’s own past is interwoven with the history of war and war crimes, Magris likens war to the momentary impression left on the hand after a sharp blade has touched it—a submerged and invisible scar.

The author, though, is a realist about this issue. He knows that war is written into the life force itself, and that people “require war in order to live.” Thus, peace means the “deactivation of history.” Indeed, without war there is no more life. War, he says, begins in the plant world, where roots emit toxins to destroy other roots and appropriate their territory. Acacias provide “proper little barracks” for one species of ants to fend off another species. The cellular battle of survival is basic to all species. Hatred is something separate, and war does not necessarily require it. This is the insoluble dilemma of human existence with which statesmen must grapple. Statesmen can delay and reduce the threat of conflict, but that is about it. “History is all a crust of blood,” writes Magris. “The train of History has bad breath.” It is a reference to the railway logistics of the Nazi Holocaust, with which Magris himself is obsessed, and which provides Blameless with its ballast and sense of the culmination of human savagery. And yet the author foresees a time when man “will master volcanic craters and make them erupt on command, burying the enemy beneath oceans of fiery lava.” You have to suspend belief in parts of this narrative, even though prodigious research has gone into it.

Magris, in the way of a war correspondent, is an expert on his subject. “War,” he writes, is “the destruction of sleep,” and also of faith. Anyone who has participated in a war, either as a combatant or as a journalist, knows how true this is: you literally don’t sleep, or sleep very little, and faith is obliterated by the overpowering reality of the moment. Men, except for fanatics, don’t die and risk their lives for a noble cause, but for their comrades in the immediate unit, whose respect becomes all that matters to them. The genius, the moral seriousness, of this book is that Magris is a realist and idealist at the same time: a realist about the constancy of war and an idealist about the need to oppose it. Meanwhile, the delicious vividness of his writing saves it from being preachy.

The museum is filled with spears and howitzers, along with twenty thousand books about war, wooden weapons of Zapotecs from the third century AD, bows and arrows of the Chamacoco, and St. Étienne machine guns. “The elegance of war,” the narrator exults, describing the design of the industrial-age rifle. Then there is the “universality” of soldiers’ caps, which are also part of the assemblage. The works of Sun Tzu, Clausewitz and so on: they are all within the museum walls. Just as the museum is a collection of objects, Magris is a collector of memories: of the Habsburg Empire, of Prague, of Trieste, of the Risiera of San Sabba—the rice-husking plant on the outskirts of Trieste that the Nazis converted into a concentration camp and crematorium, a small satellite of hell in their larger death apparatus.

WHEN I met Magris in Trieste, he handed me a book—a memoir written by his late wife, Marisa Madieri, about growing up in Fiume before it became Rijeka upon conquest by Tito’s Yugoslavs, and her life as an exile and refugee that followed. All these kinds of memories fit inside the museum, and inside the novel. Humanity kills, the narrator collects—providing order and, therefore, a temporary peace. To wit, there is Trieste before the Nazis, during the Nazis and after the Nazis. So this is also a book about landscapes and cityscapes, which themselves comprise so many disparate things—the human annihilation inflicted at the Risiera, and the illusions of Maximilian at Miramare, the seaside villa outside Trieste where the doomed Habsburg royal lived before founding a kingdom of Mexico (where he was later executed, after his vision of liberal imperialism turned out to be but a dream). Above all, Trieste is a “collaborationist” city, which after the war “washed its face and reapplied its makeup.” This is normal—it is human nature—the author appears to imply.

The author always circles back to the Nazi death machine. He writes, too, about the inhumanity of slavery in the New World tropics, but that part of the book reads more like a research job, whereas the parts about the Nazi occupation of Trieste and its environs feel lived. He identifies the sedulous opportunist Reinhard Heydrich as absolutely central to the Holocaust and its organization, maybe on account of Heydrich’s experience as a youth, when his schoolmates taunted him, calling him a Jew. “The pen is a spade,” Magris writes, and his spade works the Holocaust and its actors into both fiction here and in the travel writing of Danube. This is, at root, what animates his most important books. War—evil—is ultimately countered by the power of memory, for example, uncovering the names scrawled beneath the coat of lime on the walls of the Risiera. There is a sense in this disjointed, often discursive book that what Magris is really doing is recreating the process of memory itself, which, in turn, must lead to a dissection of human nature.

Just as memory floats in and out of focus, there are bland descriptions, periodically marred by clichés, as well as the most arresting insights. There is the führer, triumphantly entering Vienna in March 1938, “transforming Austria, with its overstated grandeur and its promiscuous cross-breeding, into a commonplace, boring Eastern March.” And Magris makes this comparison about the Germans and Russians: “There is Nazi sweat; frigid, different from the Bolshevik kind with its heavy human odor of long marches without a change of underwear.” The book is permeated with such essences, which in a lesser writer’s hands would be mere stereotypes.

This is far from a perfect book. It could have done with more editing. There is a sense of the run-on sentence in many of its passages. But more importantly, this is a serious book. Great novelists are even greater philosophers. They are always concerned with profound questions. In that regard, Blameless is like a long meditation on human reality, which is also political reality. Though Magris writes about blacks, Jews and so on, this is the opposite of a self-absorbed identity novel. This is all about the writer transcending quotidian reality and plunging into the marrow of history. Periodically Magris is mentioned as a candidate for the Nobel Prize. He should get it.

Robert D. Kaplan is the author of many books on travel and foreign affairs. He is a senior fellow at the Center for a New American Security and a senior advisor at the Eurasia Group.

Image: Team Aviano members stand in the courtyard of the Risiera di San Sabba concentration camp, May 3, 2014, in Trieste, Italy. Metal plates mark the site of the destroyed crematorium and the outline of the eastern wall of the crematorium is still visible on the main building. / U.S. Air Force / Airman 1st Class Deana Heitzman