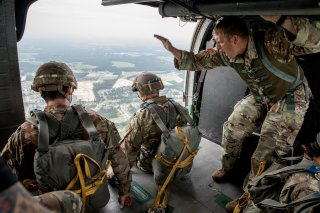 The Defense Department has both the largest share of the federal discretionary budget and the highest energy consumption of any single organization in the country. With President Joe Biden stating an intent to shift spending away from “legacy systems that won’t be relevant” to “smart investments in technologies and innovation,” his administration can achieve that goal by investing more in renewable energy sources for military facilities, fleets, aircraft and other areas. Not only will this help improve operational flexibility and readiness, the reduction in greenhouse gasses from such a large sector of the government will greatly contribute to the Biden administration’s goals of combating climate change. With the proposal for the fiscal year 2022 defense budget expected sometime this spring, the administration can signal a shift toward a more energy secure military while still fulfilling its commitment to the Paris Agreement and other green reforms.

From 2011 to 2015 the U.S. military nearly increased its renewable power generation by 100 percent while the nation’s economy added merely 2.6 percent of renewable power generation. With continued growth in renewables and further investment in the U.S. Defense Advanced Research Projects Agency, which engages in cutting edge experimental technologies, the United States could maintain a competitive advantage with its allies in NATO and the EU as well as with rivals like China who, according to Dr. Alexander V. Mirtchev, is prepared to be the world’s leading producer and consumer of alternative energy technology in the world. Mirtchev offers a variety of valuable lessons for Defense Department budget planners through his book, The Prologue: The Alternative Energy Megatrend in the Age of Great Power Competition. The book analyzes major shifts in renewable energy sources in various sectors including continued investments in alternative energy throughout the Defense Department.

Despite the United States increasing its domestic oil and gas reserves over the past decade and decreasing its dependence on foreign energy supplies, the military should continue its pursuit of alternative energy sources if the United States aims to achieve true energy security for both its warfighters and the country. As Mirtchev outlines, the Defense Department’s largest installation energy user is the U.S. Army, which is particularly at risk of experiencing disruption from various commercial power grids, including natural disasters. To mitigate those risks the “Army Net Zero Initiative” will establish twenty-five net zero installations by 2030 which will depend on the use of renewables.

The U.S. Navy has already started producing or procuring 25 percent or more of its energy consumption from renewables including the “Great Green Fleet,” a carrier strike group relying on hybrid-electric propulsion technology, fuel cells and nuclear power. And to improve the operational effectiveness of the U.S. Air Force, the military’s largest consumer of petroleum, alternative fuels like biofuel blends are being used in various aircraft.

Aside from these measures increasing military readiness, utilizing renewable energy to create microgrids can also improve the security of domestic facilities by insulating them from hacking and other cyber-attacks on commercial grids.

The U.S. military has been one of the greatest tech innovators on the planet. It won’t be different in the energy field. In addition to improved security through increased renewables, the public stands to gain from the many downstream applications of advanced energy technology. Civilian consumers already benefiting from clean air through solar and wind technologies, for example, will reap more benefits in the future from streamlined photovoltaic and wind turbine equipment that the military develops.

The public could eventually take advantage of even more advanced technology that the Defense Department is researching like nano batteries or algae-based jet fuel that could possibly be used for civilian aircraft. What’s more, Mirtchev underscores the capabilities of private defense contractors like Lockheed Martin, which has been developing Ocean Thermal Energy Conversion Technology to generate power, to provide civilian applications for advanced energy technology.

Key members in NATO have invested in renewable energy technology and research and development like France’s camouflage solar cells and electric concept naval ships as well as the UK Ministry of Defense’s projects on directed energy weapons and storage. And NATO’s Strategic Concept introduced in 2010 outlines a shift toward enhancing energy security across the alliance, but as Mirtchev notes, “tasking NATO is one thing; getting a consensus on it is another.”

Even if NATO agreed on unified energy security production and policies, the capabilities and resources differ considerably among its members. This lack of energy security continuity within NATO underscores the importance of the United States’ continued dominance in the field as it cannot rely on its alliances to consistently provide the kind of technological advancements the nation requires.

What about the United States’ top competitor? China, which has the world’s largest standing army, is second in defense spending behind the United States. It is set to increase its defense budget by 6.6 percent after two years marked by 6.6 percent and 7.5 percent increases. China’s fourteenth Five-Year Plan (2021–2025) is expected to build on its sustainable development goals and increase targets for renewable technology, along with pursuing applications for direct-energy weapons development, according to Mirtchev. In a new era in which renewable energy sources could be the difference between an agile, secure fighting force and a sluggish one at risk of market shocks and aged infrastructure, there is little room for the United States to be complacent.

Whether the defense budget for fiscal year 2022 shrinks or increases slightly, the Biden administration should emphasize renewable energy technology projects throughout all branches of the military. Just like when the U.S. military focused on the nuclear triad to deter adversaries during the Cold War, its aim in the twenty-first century should be to increase its edge as an energy-independent fighting force.

The country must be prepared to face the unpredictable threats of climate change along with leading the effort to decrease the emission of greenhouse gasses that exacerbate those threats. Understanding a historical and modern context, especially vis-à-vis the roles of energy supply chains in the great-power competition of tomorrow, is key.

James Grant is a research fellow and program manager of the Energy, Growth and Security program at the International Tax and Investment Center, where he specializes in global energy markets, geopolitics, and U.S. national security. James is a frequent contributor to the National Interest and his commentary can also be found in Bloomberg, Forbes, and Newsweek. He is a class of 2018 Securing America’s Future Energy Energy Security Fellow.