Report from Mosul: How the Epic Battle for the ISIS Stronghold Will End 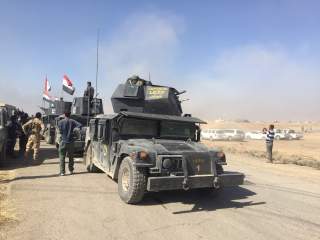 Akram Suleiman introduced himself as the head of the Kurdistan journalists’ syndicate in Mosul. But he’s not in Mosul today. Along with hundreds of thousands of others from what was once Iraq’s second largest city, he lives in the Kurdish region of northern Iraq. They fled the advance of Islamic State in the summer of 2014. Even before 2014 he says it was dangerous to go back and forth to Mosul if you were Kurdish or a member of a minority group. People used to pretend to be Sunni Arabs so as not be targeted by extremists after the U.S.-led invasion in 2003.

Along with a news crew from Kurdistan TV, Suleiman was preparing to go with Kurdish peshmerga into the thick of the fighting on October 20. On day four of the massive offensive to liberate Mosul from Islamic State, the Kurds were hoping to liberate several villages east of the city. Airstrikes and artillery were pounding ISIS positions; gunfire was sporadic in the distance. In pickup trucks, SUVs, Humvees, bulldozers and an assortment of other equipment, Kurdish fighters poured into the battle via a frontline called Nawaran. Today those Kurdish peshmerga have advanced several kilometers toward the city and liberated the villages that were their objective. But it’s a difficult and time-consuming task to reduce ISIS. The extremists have dug tunnels beneath these villages on Nineveh plains. They have planted improvised-explosive devices everywhere. And they are proficient with mortars and snipers. Col. John Dorrian of the U.S.-led coalition says that as the offensive enters the dense urban area the coalition will have to adjust its air campaign to suit the difficult circumstances.

ISIS is no longer the force it was in June of 2014 when it rolled into Iraq’s Sunni cities. It’s been reduced to less than 10,000 fighters, many of whom, when they are captured or killed, look emaciated, blackened from soot, their long hair and beards caked in dust. This is the death knell of the extremist “caliphate” that they proclaimed, but how ISIS dies in Iraq will determine much.

In a speech on October 17 as the offensive got under way, Kurdistan Regional Government President Masoud Barzani said it was a historic day. “This is the first time the blood of Peshmerga and the Iraqi forces are mixed…We hope Mosul will be liberated through this offensive, but that does not mean it’s the end of terror. It’s also a sign that Baghdad and Erbil should coordinate with the support of coalition forces.”

The coordination between the Iraqi army and Kurdish forces has taken place by placing units of the Iraqi army in two sectors that were previously held by Kurds along the frontline with ISIS. Over the course of two years fighting ISIS, Kurdish frontlines extended along more than 600 kilometers from the mountain of Sinjar to Kirkuk. The Iraqi army meanwhile was engaged in a slow, punishing, war of removing ISIS from its strongholds in Ramadi, Fallujah and other areas. Now Iraqis are based near Tel Keppe, northeast of Mosul and between Bartella and Gwer south and east of Mosul. Now that the war approaches its epic conclusion the concept is to inject the Iraqi army into Mosul from three different axis of advance. The Iraqis will assault Tel Keppe, eight miles northeast of Mosul now that Kurds have liberated Batnaya, a village nearby. From the east the Iraqi elite counter-terror force (ICTF) known as the “golden division” will move from Bartella into Mosul suburbs. From the southeast the ninth armored division and ICTF will move from Bakhdida, which was mostly captured on October 23, into the southern suburbs. In four days in northern Iraq that I spent with the peshmerga and Iraqis it was clear the two forces are motivated and working hard to carry out their objective.

As the Iraqis advance they will leave behind the Kurdish forces who are now busy constructing new frontline berms in the areas they liberated. This was part of an agreement that the U.S.-led coalition helped broker between Erbil, the capital of the KRG, and Baghdad. Previously there had been many disputes between the two over the outcome of the war. Baghdad reads the map of the conflict and sees Kurdish forces consolidating control over areas in Sinjar, Kirkuk and Nineveh that had previously been disputed between the Iraqi central government and the KRG. This is a legacy of the 2003 invasion that gave birth to the current constitution of Iraq which provides for a Kurdish autonomous region in the north. But the borders of that region were never fully settled. Kurds want control over areas that have Kurdish populations, including areas inhabited by Yazidis and some other minorities such as Assyrian Christians and Shabaks. The Iraqi government wants these areas, and their oil revenues returned to the government.

The local minorities themselves, most of whom are refugees now in the KRG, after fleeing ISIS, often have competing agendas. Some Christians and Yazidis want their own provinces, but they also want security from the rise of extremism again. They were targeted brutally in 2004 and 2007-2009 by extremists based in Mosul. ISIS was merely a new iteration. Some groups, such as the Nineveh Plains Forces, a Christian militia, have been closer to the KRG, while other Christian groups have been closer to Baghdad. The same is true of some Yazidis who are affiliated with Sinjar Resistance Units or YBS which is seen as being closer to the PKK and thus closer to Hashd al-Sha’abi and Baghdad. Other Yazidis are closer to the Kurdistan Democratic Party, and therefore to Barzani and Erbil.

This complex mosaic may be more symbolic in the long run. Many of the towns the Iraqi army is rolling into are minority towns, such as Bakhdida, Bartella and Tel Keppe, all of which are Christian. Bells rung for the first time in Bartella after the Iraqi ICTF took the town on October 22.

Professor Abdulhakeem Khasro, a political science professor at Salahaddin University and at the IRDK think tank in Erbil says that the Mosul offensive has caused many tensions, but that negotiations can simmer them. “Kurdistan works sensitively on the Mosul issue…we will have a good role in the stability of Mosul. We want to solve the issues facing Kurds, Yazidis and Christians in a peaceful way.” This means that the current climate linking Baghdad’s mostly Shia Arab army and the Kurdish Peshmerga, who are mostly Sunni, could foster negotiated settlements that bring peace to Mosul after the war, rather than the dire “next conflict” that many have predicted between groups such as the Hashd al-Sha’abi and the Kurds.

Factors such as the Turkish role in the Mosul offensive will continue to be of importance. Turkey has a base near Bashiqa where it trained thousands of Sunni Arabs connected to the former governor of Mosul, Atheel Nujaifi. It has artillery that has aided in suppressing ISIS mortars in Bashiqa town. Turkish President Erdogan and foreign minister Mevlut Cavusoglu have stressed the importance of stability in northern Iraq for the Turks. “Our aim is to remove Daesh [ISIS]…Iraq is a neighbor and friend for Turkey and for us the territorial integrity and stability in Iraq is as important as our own,” said Cavusoglu on October 25. Now Cavusoglu is talking about the threat of the Kurdistan Workers Party from Sinjar. That could be a pretext for greater involvement, similar to how Turkey claimed it was moving into Syria to defend Jarabulus in August.

With so many different parts of Iraq and the region linked by Mosul, it seems like a ball of string, where pulling any part of it affects the rest. Everyone agrees about the need to remove ISIS from it, but on little else.