Report Required: The Pentagon Must Be Pushed Into Examining Its Excess Infrastructure 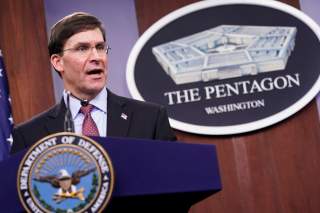 The administration released its defense budget on February 10 but what’s likely to be the most controversial element has yet to be seen. I’m talking about the Pentagon’s report on infrastructure capacity, the one required by the FY 2019 National Defense Authorization Act.

The act requires the Defense Department to submit a report assessing how its bases and other facilities align with its plans for force structure. The result should show excess or deficits in the Pentagon’s infrastructure.

This was Congress’s third request for this type of study in three years.

A March 2016 study found the Pentagon had 22 percent more infrastructure than it needed. Congress subsequently increased the force structure planning assumptions and, in October 2017, the Pentagon produced a second study that determined that it had 19 percent excess capacity.

The main difference between these previous efforts and the study required by the 2019 act is in the level of detail. This new study is supposed to identify excess or insufficient infrastructure capacity by specific U.S. locations. So, for example, it is supposed to say that Fort “X” has too much capacity, while Air Force Base “Y” has too little.

If the Pentagon actually produces such a report, then sparks will start to fly immediately.  After all, it would be “naming names” of potential winners and losers for closure, realignments and expansions.

This kind of analysis is needed, but if it is made public too early in the process it would create reflexive resistance and obstacles. Hopefully, the Pentagon and the House and Senate Armed Services Committees that will receive this report have already been discussing how best to handle this hot potato.

So far, there is no public indication that any of this negotiation has taken place or that the report has been produced, much less delivered to Congress.

At a time when the secretary of defense is conducting zero-base deep dives to find every extra nickel and dime in the Pentagon’s budget, two big silver dollars stare him back: A new round of base realignments and closures (BRAC) is estimated to save the department $2 billion annually.

Beyond generating savings that could be reinvested in military assets needed to implement the National Defense Strategy, a new round of BRAC would allow the department to assess whether its current infrastructure is aligned with the new strategy. After all, military installations are an integral part of how the United States organizes its posture for power projection and how it trains its armed forces.

Despite all of this, for the last two years the department has neither asked for the authority to conduct a new round of BRAC nor delivered a new study outlining the need for a new round of BRAC. The Pentagon leadership has declined to make an argument for what former Secretary of Defense Jim Mattis called “one of the most successful and significant” of all the efficiency measures that the Pentagon has taken over the years.

There is still time. Responsible leaders in Congress can insist the Pentagon submit the required report. Assuming that the findings are similar to those of the two previous studies, lawmakers could then start the wheels turning in the FY 2021 National Defense Authorization, by directing the department to conduct a carefully scoped and monitored base realignment and closure process. Two-billion dollars in annual recurring savings are at stake.

Frederico Bartels is a policy analyst specializing in defense budgeting in The Heritage Foundation’s Center for National Defense.