A Report from the Front: Why the Peshmerga Need More from America 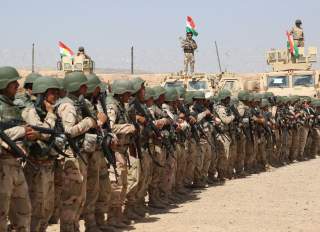 My team and I are seven kilometers from the Mosul front line, in a peshmerga camp. We are drinking the inevitable never-ending cups of very strong, very sweet tea with the general, his officers, his men and an assortment of elderly peshmerga who have come out of retirement to voluntarily rejoin the fight. They are instantly recognizable by their baggy pants and turbans, compared to the younger soldiers in a variety of camouflage uniforms.

We’ve arrived during a lull. The fight for Mosul is tricky, because ISIS fighters can and do hide behind the civilian population. “Today is a good day for Daesh,” our hosts remark, with an eye to the sky; Daesh is their name for ISIS. That’s because it’s raining with heavy cloud cover, which obstructs air surveillance and targeting. Bad weather and ISIS, here in Iraq, get along well together.

We’ve brought several duffel bags stuffed with medical supplies including tourniquets and hemostatic bandages, and they form a circle around our medic, who will demonstrate their use. Our audience watches intently as David shows them how to put a tourniquet on an arm or leg, tighten it by pulling the strap, ratchet it even tighter, then feel for your pulse (if you can feel it, it’s not tight enough). Their gratitude for something as basic as tourniquets and products that will stop arterial bleeding is embarrassing to me as a former U.S. military officer. These are our staunchest allies in the fight against terrorism, yet we are leaving them high and dry. The peshmerga lack everything: tourniquets, medics, ambulances, properly supplied field clinics and, most importantly, life-saving frontline medical training. One of the soldiers timidly asks if we happen to have a knee brace; it’s harder to fight when you’re limping. We don’t—next time, we will. But the full extent of the shortages continues to come as a shock.

Tragically, a badly injured peshmerga soldier will often bleed out before he can get help. His comrades will try to drag him to a pre-positioned shelter outside the range of fire, where a random volunteer who may or may not have any medical training will attempt to call for an evacuation—with a cell phone, as there are no field radios. One of the cars positioned in the area—not an ambulance, but a retrofitted four-wheel-drive with no oxygen and certainly no trauma equipment—will respond, but given the shortage of transportation will usually be instructed to wait for a few more wounded before heading to a makeshift, poorly stocked and inadequately staffed field clinic. If our soldier is very lucky, he’ll make it all the way to a civilian hospital in town, after a two-hour drive, which may not be equipped for traumatic battle injuries or even have the pain medications or antibiotics he needs. Many soldiers survive their injuries, only to die of infections and complications that are completely avoidable with modern medicine.

This is my fourth trip to the Kurdish peshmerga soldiers, and every visit leaves me feeling angry and incredulous. The Pentagon Inspector General’s office recently published the results of its one-year study of U.S. aid to the peshmerga; my own observations suggest things are even worse than described in the already very critical report.

These are our most loyal and committed allies, fighting on our side—really, in our stead—against one of the worst and most barbaric group of savages in modern times. Remember? ISIS: that’s the group that publishes gloating videos of its members beheading their hostages, including several American journalists and aid workers. They crucify children, slaughter Christians, put captives in cages and burn them alive. They have launched or facilitated several major terrorist attacks in the West and incited deranged individuals in the United States and Europe to commit lone-wolf attacks in their name. In their first grand sweep across Iraq in 2014, the Iraqi Army dropped its guns, leaped from its U.S. donated tanks and ran, abandoning a treasure trove of high-tech, high-value arms and supplies to the enemy in the process. Infamously, they did the same again in 2016.

By contrast, throughout, the peshmerga have held the line. They’ve even liberated the Christian villages in the Nineveh Plain that had been occupied by ISIS; they’re defending the Christian refugees who had to flee Baghdad and other parts of Sunni and Shia Iraq; when they liberate a Christian village, the first thing they do is put the cross back up on the church steeple, as a message that Kurdistan is home for everyone. They fight when they’re not even on the rolls, and when they haven’t been paid their wages for several months due to the economic crisis in their region. They’re gutsy, they have great morale, and the fact that they don’t complain to me about my country’s failure to do what’s right by them only makes me feel worse.

In his inaugural address, President Trump named the complete elimination of ISIS as a top priority. The peshmerga are key to this. Unlike some of the allies he has criticized, the peshmerga are pulling their weight and doing their share—and more. By protecting Christian and Yazidi territory and sheltering minority refugees, they enable them to stay in the region, thereby reducing the flood of refugees into Europe and the United States.

It’s really just three things that need to happen. We need to supply the peshmerga directly, instead of going through Baghdad, where the best is skimmed off and, in too many instances, even sold to insurgents by corrupt individuals. We need to provide them with weaponry, combat vehicles, ammunition, communication equipment and medical supplies, and beef up the U.S. advisory force that has made a difference. And we need to train their medical personnel to a U.S. standard, and make sure they have everything they need. Medical aid on the battlefield makes a difference, not only by saving soldiers’ lives, but exponentially improving a warrior’s morale.

The peshmerga Kurds are tough and reliable, they protect and provide for all religious minorities, and they love America. In this war-torn region full of hatred and unpredictability, who better than the Kurds to align ourselves with, enthusiastically support and commit to as a staunch ally?

David Grange, a thirty-year Army veteran, founded Osprey Global Solutions, LLC, which operates globally, providing services to government, for-profit and nonprofit sectors. Prior to Osprey, Grange was the CEO of PPDI (Pharmaceutical Product Development, Inc.), where he was responsible for the oversight of company clinical and laboratory operations and personnel in over 100 countries. After retirement from the Army he was CEO of the Chicago-based McCormick Foundation, one of the largest philanthropic organizations in America.