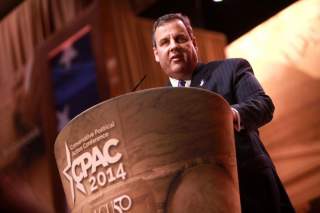 Jeb Bush’s possible entry into the 2016 Republican presidential primaries has raised many questions. Here’s just one: What happens to Chris Christie?

Not long ago, the New Jersey governor looked like the safe establishment choice for the GOP nomination. Conservative enough to possibly be palatable to the base, not so conservative to necessarily be kryptonite to swing voters—a blue-state governor cozy with the party’s Northeast donors.

Except that since his landslide reelection, Christie hasn’t worn well with either grassroots conservatives or the more moderate voters who could be peeled away from Hillary Clinton.

The right doesn’t feel that Christie did enough for Mitt Romney in 2012, instead hugging on Barack Obama during Hurricane Sandy. They don’t think he helped where needed as Republican Governors Association chief during the midterms.

Meanwhile, the George Washington Bridge scandal has in some quarters reinforced Christie’s image as a bully, even though the governor has never been implicated. Donors began to doubt whether Christie could really beat a conservative upstart—maybe even a Ted Cruz or Rand Paul—when push came to shove, leading to murmurs about Romney and opening the door to Jeb.

Christie is still polling competitively, but in the latest CNN poll, he is 10 points behind Bush. Bush’s lead isn’t impressive compared to either his father or brother’s at a similar point in their presidential races, but it is also the first major survey in this cycle to show a candidate with a lead greater than the margin of error.

Since 1980, it’s been common for there to be multiple candidates vying for the conservative vote. Even Ronald Reagan had to contend with Phil Crane. But there is usually only one establishment candidate.

The only precedent for multiple establishment-friendly candidates simultaneously running in the top tier is when Rudy Giuliani and John McCain were both running in 2007-08. Giuliani led in all the national polls, usually by a much bigger margin than Bush’s in the CNN survey.

McCain was frequently in second place, but his campaign had major problems. It almost went broke in 2007. The last gasp of McCain’s immigration bill, widely regarded as an amnesty for illegal immigrants, nearly brought down his candidacy.

As it turned out, Giuliani imploded. He was too socially liberal to contest Iowa. He inexplicably bypassed New Hampshire, preferring to set up shop in Florida, where his mayoralty would be remembered fondly by retired New Yorkers. But by the time the Florida primary rolled around, the race had passed him by.

McCain stumbled into New Hampshire, where the state’s independent voters rescued him from a near-certain political demise. Then the money started flowing in. McCain was pro-life, while Giuliani was pro-choice, so the Arizona senator buried the hatchet with the social conservatives he had alienated in 2000.

If you’re Chris Christie, you want to be John McCain (minus the nearly going broke part): poll well enough to hang around, wait for the entitled guy counting on the Florida primary to stumble. Christie will likely concentrate on the New Hampshire primary.

The problem is that Christie looks a little bit more like Giuliani: the loud, combative Northeasterner trying to win over a Sunbelt party. Bush isn’t a social liberal, and he might be able to trade on his brother’s appeal to evangelicals in states like South Carolina.

Bush’s political vulnerabilities are on issues like immigration and Common Core. Christie is not well situated to attack him on either front. Plenty of other potential candidates are.

Of course, it is probably unrealistic to expect 2016 to play out exactly like 2008. Maybe it will be more like the 1960s, when the Eastern establishment waited to see whether George Romney or Nelson Rockefeller was the stronger horse. Maybe it will be like nothing ever seen before.

One of the reasons conservatives keep losing the nomination is that their votes are split. This allows an establishment candidate to say he is just conservative enough—and really the only electable option—to slide through.

If Bush and Christie both do well, it raises the possibility of the establishment vote being split. This would allow the winner of the conservative primary to win the Republican primary for the first time since Reagan.

But both Bush and Christie are frontrunners in another sense: a lot of their support is based on the idea that they will be the eventual nominee. If one of them falls behind or seems to lack a viable path to the nomination, their numbers could sink quickly.