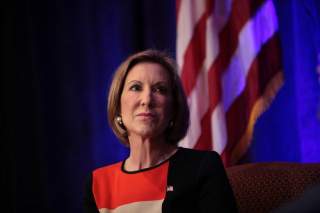 What if they held a circus and a Republican presidential debate broke out? As Fox Business Channel and the Wall Street Journal brought the major GOP contenders together for the fourth time, we got something more like the latter than the former.

Yes, you can argue that the criteria of who was on which stage was a bit arbitrary. But even the undercard debate, heretofore a humiliating event for almost everyone involved except for Carly Fiorina, looked professional.

Half the candidates at the “kiddie table” were sitting governors. All of them were winners of competitive of elections with serious governing experience. As much as we missed Lindsey Graham somehow managing to mix self-deprecating humor with warnings of impending American doom, combining Chris Christie and Mike Huckabee with Bobby Jindal and Rick Santorum worked well.

Christie was the biggest name demoted to the undercard and he obviously hopes to be the first since Carly Fiorina to leave it for the main stage. He did well and his focus on Hillary Clinton, rather than squabbling with also-rans, was probably wise. The only question is whether what he was trying to accomplish was just a little too transparent to move his numbers. We’ll see.

Jindal made an impassioned argument for why Republicans should want a principled opponent of big government rather than simply a person with an “R” next to their name. As the author of a book about shrinking government, I appreciate the argument. I’m just not sure his executive experience in Louisiana is sufficient to overcome the fact that Ted Cruz and Rand Paul have consistently appeared in the primetime debate. Huckabee was witty and homespun while Santorum was eloquent and earnest; I doubt that either one hurt or helped himself last night.

On to the main event. Donald Trump is getting more polished. He still shies away from details at times and gets technical details wrong. He made a mistake by continuing to pull Fiorina’s pigtails, accusing her of constantly interrupting. But overall, he’s defending his viewpoints better, appearing more gracious and less gratuitous in his comments about other candidates—and he helped Paul keep an actual foreign policy debate going.

This was Paul’s best debate. He differentiated himself more effectively than ever before and interjected more strategically. If you could combine Paul’s sophistication with Trump’s energy and nationalist populism, it might give the hawks a run for their money.

As it was, however, Marco Rubio had another strong debate and was able to make his case for an activist foreign policy in a way that hits all the right emotional buttons with the Republican base. He was joined in some of those arguments by Jeb Bush, who steered clear of any telegraphed attacks on his fellow Floridian tonight.

Bush was improved from the previous debate, but not by enough. He was interrupted with impunity, with Trump at one point having to help him out. He couldn’t even keep John Kasich from engaging in random chatter about a value-added tax, of all things, while he was trying to speak.

There is a fine line between being a sober truth-teller among demagogues and scold who alienates his party’s base. All too often, Kasich crosses it.

Fiorina remains an effective communicator. She did, in effect, punt on why recent Democratic presidents can boast better job creation than under George W. Bush, and you do wonder if even her better answers will boost her poll numbers. But she is too well liked for Trump to keep taking unprovoked shots at her.

Ben Carson had some nice moments in dealing with the questions about his biography. He has yet to demonstrate any policy competence. Will this matter? It hasn’t so far, though many polls show his support is soft.

Ted Cruz continues to come into his own. He smartly triangulated between Rubio and Paul on the Pentagon budget. His line about how the media would care more about illegal immigration if the newcomers were driving down journalists’ wages was effective. So was his exchange with Kasich over government bailouts.

Overall, the Republicans on the stage still need to do better at articulating why people who voted against John McCain and Mitt Romney will see their economic fortunes improved by pulling the GOP lever next November. This economic debate was the most substantive, and a huge improvement over the CNBC program, but that’s a big shortcoming.