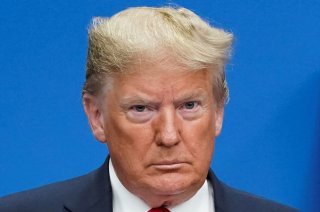 The House Republicans are going to war—against Donald Trump. On Tuesday, twenty-two members of the House Armed Services Committee, including Mac Thornberry, denounced the initiative floated by the Trump administration of pulling a quarter of U.S. troops based in Germany. “We believe that such steps would significantly damage U.S. national security as well as strengthen the position of Russia to our detriment," the lawmakers wrote. The rift between Trump and the defense hawks is emblematic of the longstanding tensions between the two sides. As Trump falls in the polls, it could become even starker in coming months.

Trump has become more unbridled about his contempt for the Washington defense hawks in recent weeks, lamenting that “the military-industrial complex is unbelievably powerful” in a recent interview. He also dismissed the idea that America should be involved in Afghanistan, Syria, Iraq or Turkey: “They’ve been guarding the border for 2000 years. Why should we have our people guarding the Turkey-Syria border? We don’t give a shit what happens. It’s up to them.”

Currently, 35,000 American troops are stationed in Germany. The move was first reported by the Wall Street Journal, which noted that national security adviser Robert O’Brien had signed off on the move rather than the Pentagon brass. Trump, as is his penchant, seemed to be ignoring the formal chain of command in what not a few detractors interpreted as a swipe at German chancellor Angela Merkel’s refusal to travel to America for a G-7 meeting this summer. Richard Grenell, who was until recently Trump’s ambassador to Berlin, has made no secret of his contempt for Berlin’s lack of Teutonic martial fervor and urged Trump to take a harder line.

But the pullout does not appear to be a done deal. Since then, the administration has not formally proposed the move, prompting speculation about whether it will actually occur. Is O’Brien simply floating a trial balloon? Or is Trump intent on a withdrawal?

Trump has repeatedly expressed his vexation with NATO members in general and Germany in particular for failing to meet their financial obligations. To his critics, it’s simply a smokescreen for weakening NATO and cozying up to Russian president Vladimir Putin. Peter Beyer, who is the German coordinator for trans-Atlantic ties, deemed it “completely unacceptable.” Writing in the Washington Post, George F. Will complains, “the redeployment gratifies Vladimir Putin… Putin, the other world figure who is a cauldron of resentments, has a special grievance against NATO for its role in the Soviet Union’s demise…”

For restrainers, however, it’s eminently sensible for America to wave auf Wiedersehen. William Ruger, vice-president for Research and Policy at the Charles Koch Institute, states, “Reducing U.S. forces in Europe would facilitate burden-sharing and incentivize our wealthy European allies to take greater responsibility for their security as we face more pressing needs at home and in other areas of the world. Germany is rich, populous, and technologically sophisticated; it has the ability to contribute more to European security than it has. President Trump should see this directive through and not allow critics of his move to undermine this effort to re-align our foreign policy.” Others agree. Sumantra Maitra, a columnist for the Federalist who has written extensively on European security, avers, “part of the reason West European muscle atrophied is because Germany and others know that Uncle Sam is there to guard the frontier, and they won’t face any threats from the East. If the American strategy is to ensure that prosperous Europeans pay more for their own defense, then it should transfer all troops east of the Thames, and not just relocate from Germany to Poland or Latvia.”

Whether or not Trump follows through on his pullout, it seems clear that the stage is set for further battles between Trump and the Republican defense hawks over America’s presence in Afghanistan and elsewhere. The boldest move Trump could make would be to seek a rapprochement with Iran—something that his own aides such as Secretary of State Mike Pompeo would seek to thwart.

But as he faces a difficult path to reelection, it is political considerations that will weigh most heavily with Trump. A wider pullout of troops, not just from Germany but also Afghanistan, would allow Trump to declare that he truly is following through on his original campaign promise that it is time for America to come home. But the question, as always with Trump, is whether his statements represent actual policy aspirations or just a lot of hot air.