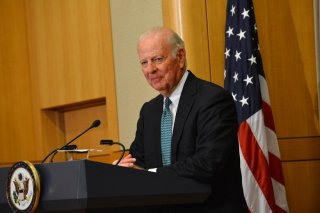 Former Secretary of State James Baker is discovering who really controls the Republican Party. Baker, who has never had much patience with Israel’s settlement policy, appeared on Monday evening before the Washington lobbying organization J Street—which was founded to counter the American Israel Public Affairs Committee—to chide Israeli Prime Minister Benjamin Netanyahu for opposing Iran talks and disdaining a two-state solution with the Palestinians. “Frankly, I have been disappointed with the lack of progress regarding a lasting peace—and I have been for some time.” These might seem like fairly tepid criticisms, which is what they are. But now the long-time Bush family counselor is being repudiated by former Florida Governor Jeb Bush who is scurrying to shore up his support among the GOP’s pro-Israel base.

It’s an unfortunate but unsurprising turn of events. Baker, after all, served not only George H.W. Bush but also George W. Bush, at least in the form of playing a key role in securing the presidency for him during the contest over Florida’s votes in the 2000 election. Baker is a savvy professional whose record speaks for itself. He is a consummate diplomat who helped end the cold war without firing a shot.

At the same time, however, he has been the bête noire of the neocons for opposing Israeli settlement policy during the George H.W. administration. His point was that some accommodation needed to be reached between both sides. On June 13, 1990, in testimony to the House Foreign Affairs committee, he noted that if Israel simply abandoned the idea of a settlement, then there was little any American president could accomplish:

I have to tell you, that before I came to this hearing this morning, I was given a copy of some wire reports, one of which quotes one of the ministers in the newly formed Government. Someone asked him, `Why couldn't you move forward on the proposal that the United States made for a dialogue with Palestinians from the territories?' And he said, 'That question is no longer relevant.'

Baker went on to attack the Shamir government: “'I have to tell you that everybody over there should know that the telephone number is 1-202-456-1414. When you're serious about peace, call us.''

These statements have never been forgotten—or forgiven—so Baker’s appointment as an unofficial adviser to the latest Bush campaign was bound to raise red flags.

So for all that Baker has performed for the Bush family, gratitude is not really a political category. It's telling that, in the current context of the GOP, Jeb Bush clearly feels compelled to distance himself from Baker. As a result, the Bush campaign released an officious statement from spokeswoman Kristy Campbell allowing that while Bush “respects Secretary Baker, he disagrees with the sentiments he expressed last night and opposes J Street’s advocacy. Governor Bush’s support for Israel and Prime Minister is unwavering, and he believes it’s critically important our two nations work seamlessly to achieve peace in the region.”

Well, yes. But working together “seamlessly” does not have to imply Washington prostrating itself before the Netanyahu government. The recent Netanyahu speech before the Congress had all the spontaneity of an old Politburo meeting.

What this kerfuffle really signals is that the GOP is moving toward a position where even the slightest criticism of Israel is taboo. Whether this stance is politically useful is an open question. The GOP is clearly trying to split off American Jewish voters from the Democratic Party, a longtime neoconservative aspiration dating back to the 1980s. As Milton Himmelfarb once put it in Commentary magazine, “Jews earn like Episcopalians, and vote like Puerto Ricans.” By which he meant that they were driven by social issues, that they were, in effect, voting against their pocketbooks.

But the problem with Netanyahu’s approach, purely at the tactical level, is that it may not work. It could well have effects that are inimical to Israel’s security. As Peter Beinart has argued, younger Jews are simply tuning out from Israel. Indeed, if Israel descends further and further into a bunker mentality, it will lose broader support in the United States.

But none of this will deter Baker’s detractors who are intent on purging the GOP of even a jot of criticism of Israel. William Kristol, the editor of the Weekly Standard, tweeted: “James Baker & J Street. The anti-Israel pre-Reaganite GOP meets the anti-Israel post-Clinton left."

It’s a clever, if misleading, way of framing matters. The fact is that Baker was instrumental in ensuring that Ronald Reagan’s presidency was successful, both as his chief of staff and Treasury Secretary. He is a respected statesman. But that seems to count for little these days. Bush's distancing of himself from Baker is a telling sign of the way that the neocons have successfully ensured that their vision is synonymous with the GOP’s.