Republicans May Be Celebrating a Temporary Health Care Victory 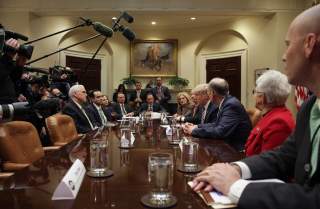 It's often said in financial markets that stocks “climb a wall of worry.” If that's similarly the case for political markets, then ongoing efforts by congressional Republicans to repeal and replace at least some parts of Obamacare should be on their way to a big rally. President Trump can continue to supply the “bull.”

Thursday's remarkable turnaround in the House, in which Republicans narrowly eked out a 217-213 victory, moves on to the Senate the latest version of previously delayed and frequently revised legislation to overturn key provisions of the Affordable Care Act. It wasn't pretty, but it showed that political desperation and a shrinking calendar for action has a way of concentrating the minds of uncertain members.

It finally dawned on previous holdouts that the only thing worse than passing an updated version of last March’s American Health Care Act was to admit failure to redeem (loosely) past campaign promises to end Obamacare.

This represented a narrow political victory, rather than one of substantive and sustainable health policy reform. But it will have to do for now.

What made the extra difference, after House leaders had to pull a similar earlier measure right before a House vote (and certain defeat) on March 24? It mostly involved some newer, creative legislative ambiguity, which included different options that would allow states to seek expedited waivers to escape—or modify—certain federal-insurance regulations, along with slightly enhanced funding for vaguely defined mechanisms that would help insure individuals with high-cost, pre-existing medical conditions who lack continuous insurance coverage.

The actual House provisions still may prove insufficient to achieve their stated goals (i.e., not enough money, not enough state government adopters and not enough consistently structured details), but that's largely beside the immediate political point: they worked well enough to bring the needed number of very conservative Freedom Caucus and more “moderate” Tuesday Club members on board the bill— even if for different reasons under different assumptions. In other words, ambiguity, expediency and desperation were the best whips for House vote counters.

In NCAA basketball tournament coaching parlance, this strategy for moving past close calls in early round action is called “Survive & Advance.”

Now it's on to the semifinals in the Senate. More conflict awaits issues of:

• Medicaid financing (ACA expansion states want to hold on to more of their enhanced access to other people’s money),

• Redistribution of insurance tax credit subsidies (tilting back toward the near-elderly and away from the upper middle class in individual insurance markets),

• How to minimize the next Congressional Budget Office scoring critique of the House-passed bill,

• and some senators just being senators in striking grandstanding postures.

Republican vote margins in the Senate are even more precarious than they were in the House, and the Senate usually treats House-passed bill language more as a case of first impression than a team-building exercise. Nevertheless, the budget reconciliation clock is ticking closer to its final sell-by date.

If and when a Senate bill to repeal, replace, or “whatever” the ACA passes, it's highly likely to differ from the House measure and require working out a shaky compromise in conference committee. Getting House approval of Senate changes in the finals will pass as comfortably as a kidney stone, at best.

So buckle up. Although it's said that victory has hundreds of fathers and defeat is an orphan, the temporarily triumphant Trump White House might need to engage more effective “adoption” counselors. And even if Republicans finally succeed in snatching legislative victory from the still-ominous jaws of defeat, then their next challenge of implementing new law and policy for health care could remind them of the “Winner’s Curse” in such endeavors. We may not get the health policy we want, but we generally get the health policy we deserve.

Tom Miller is a resident fellow and chief entertainment critic for health policy at the American Enterprise Institute.