Republicans Now Have to Convincingly Sell Their Health-Care Plan 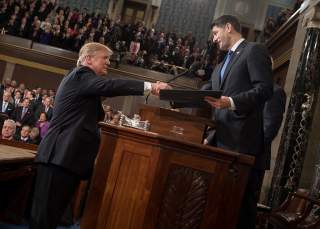 Republicans are one step closer to at least partially fulfilling a seven-year promise to repeal and replace Obamacare after Thursday’s narrow House vote.

That’s the good news for a party that controls both ends of Pennsylvania Avenue but has nevertheless found major legislative achievements elusive in the first months of Donald Trump’s presidency.

Unfortunately for Republicans, there are many more steps to go before they can claim a lasting victory against Obamacare.

The action now moves to the Senate, where some of the same Republican factionalism that imperiled health-care legislation in the House still exists but there is a much smaller margin for error. The GOP holds fifty-two seats.

It’s not clear that the Senate’s staunchest conservatives, lawmakers like Sen. Rand Paul, have yet achieved the Freedom Caucus’s level of peace with the GOP health-care bill. Some fairly conservative members from Medicaid expansion states, like Ohio Sen. Rob Portman, seem to at least initially be siding with the moderates.

Maybe none of this will matter, since the Senate seems inclined to merely take the House bill as a set of suggestions and start from scratch on its own. But even if GOP senators can get to a majority by themselves, Democrats will challenge major provisions as irrelevant to the reconciliation process.

That alone could jeopardize the whole Obamacare repeal-and-replace project for this brief reconciliation window. It could also subject the legislation to filibusters that Democrats know their Republican colleagues can’t break.

If Senate Republicans have to make major changes to ram this bill through—let’s not forget that Senate majority leader Mitch McConnell succeeded in getting Susan Collins to vote for the nuclear option to confirm Justice Neil Gorsuch—it would go back to the House, where it just barely passed the first time.

The longer this drags on, the harder it will get. As 2018 approaches, so do the midterm elections. That will make Republicans even more reluctant to take hard votes, making party unity an even more remote prospect.

But the Republicans’ health-care woes are even more fundamental than the congressional math or arcane Washington procedures. Their argument for better-functioning markets in health care is less familiar to the public, even their own politicians, than the case for greater government control.

Everyone knows about single-payer in Canada or the National Health Service in Great Britain. Those systems have grave flaws, and almost certainly could not be replicated effectively here in any event. But what are the Republicans’ real-world counterexamples, given their own reluctance to reform health care on their own terms years ago? Singapore? Massachusetts under Mitt Romney?

Specific to this legislation, Democrats have a simple, superficially plausible argument to make: Republicans want to take health insurance away from twenty-four million people—their own Congressional Budget Office says so!—to finance a big tax cut for the rich. People with preexisting conditions, they say, will be hardest hit.

Republicans have a decent enough counterargument: insurers are increasingly bailing on Obamacare, premiums are skyrocketing in many places, high deductibles are rendering health plans useless for people who have shelled out big dollars to pay for them. Deregulation could lower premiums, increase access and make the exchanges more attractive to young, healthy people, building a better risk pool.

The trouble is that Republicans will have to make that argument against the full weight of the media, popular culture and even late-night television comedians telling them that tweaking Obamacare even in the slightest will result in certain death for thousands of Americans.

Also notice what Obamacare’s weakest link is: the troubled exchanges that were supposed to be the law’s major concession to free-market health-care reform. It’s not the Medicaid expansion, which is its most government-centric component that many Republicans are suddenly afraid to touch.

What lesson do you think Democrats, fresh from witnessing socialist Bernie Sanders become a national name for the first time in his long career, derive from this?

Yes, there is a very strong case to be made against Medicaid as presently constructed both in terms of fiscal cost and health outcomes. No, the Obamacare exchanges in their current reform aren’t true free markets in health insurance.

But if Republicans are stuck arguing over who will spend the most money taking care of people with preexisting conditions, who will make all of Obamacare more like the exchanges than Medicaid, it’s no wonder they have had to drag their members kicking and screaming to come this far. And they aren’t across the finish line yet.