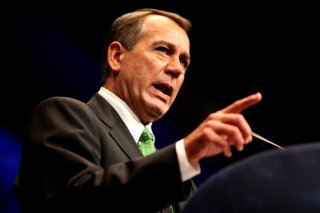 Republicans need to set aside ideological blinders and vote tactically, in cooperation with President Obama, to save the U.S. trade agenda.

Last week, the president and Republicans who support free trade were outflanked by a last minute, cynical (and effective) move by House Democrats to vote against Trade Adjustment Assistance (TAA), a government assistance program for workers displaced by foreign competition. This was done to derail a larger package deal that included Trade Promotion Authority (TPA), a procedure by which Congress and the president agree to terms for an up-or-down vote on future trade agreements. U.S. trading partners have long demanded the TPA assurance as a prerequisite to placing their final trade deal offers on the table.

What occurred last week was that the House took up a package of proposals passed the week before by the Senate; the combined package included TAA and TPA. Traditionally, the deal has been structured so that Democrats would supply most of the votes for TAA, with enough Republicans votes to achieve a 218 House majority. In turn, the Republicans would supply most of the votes for TPA, again with just enough Democratic votes to get over the finish line. For over a decade, Democrats have demanded and received hundreds of millions of dollars for displaced workers. This is Democratic dogma even though the program has been deemed ineffective and wasteful by independent analyses, including that of the General Accounting Office.

The current legislative authority for the TAA program ends on September 30. After years of accusations of Republican cold heartedness toward vulnerable workers, House Democrats betrayed this key constituency — with the double irony that it was done pursuant to the demands of organized labor. The House vote to renew the TAA program was 126-302, with only 40 Democrats joining 86 Republicans in favor. Over 140 Democrats voted “no.” The House then voted 219-211 in favor of TPA with 191 Republicans joining 28 Democrats. Minority leader Pelosi stated flatly that Democrats had cast their TAA votes as the only available means of blocking TPA, since the political agreement dictated that both advance together.

It is time for the Republicans to match the House Democrats, play hardball, and vote for the larger goal of advancing the U.S. trade agenda. First, they should make it quite clear to the Democrats that if the TPA (and with it, any chance for the TPP to pass) goes down they will block renewal of TAA in September—and place the blame on the Democratic vote of betrayal last week. Then, with a better purpose than their Democratic foes, they should supply the votes for the current bill to renew TAA as part of the overall trade legislative deal.

There are strong practical and strategic reasons for such a move. First, even the most conservative House Republicans know that for some years the party had accepted that a side deal on the TAA is indispensable for a successful TPA vote. And in the votes last week, House Republicans had already supplied many more votes than has been the case in the past.

Beyond the purely transactional rationale, Speaker John Boehner (R-OH) and his lieutenants should step up and remind House Republicans that the larger goal of U.S. leadership of the global trade agenda—including concluding the huge Trans-Pacific and European trade pacts—should provide the compass for the minor tactical downside of voting for a program they generally oppose. The challenge transcends the economic consequences: current and former Secretaries of Defense and State from both parties have warned that should the agreements fail, our allies in Asia and Europe would certainly conclude that the United States is no longer willing to lead. The Chinese and the Russians would be delighted.

Yes, in the short term, House Republicans might well face heavy criticism from rigid conservative ideological groups such as Heritage Action and rabid radio hosts. But if the next president in two years is a Republican, he or she will certainly extend a hand of gratitude for such a timely and responsible action in the coming weeks.

Claude Barfield is a resident scholar at the American Enterprise Institute.