Reshaping Iraq After the Defeat of the Islamic State 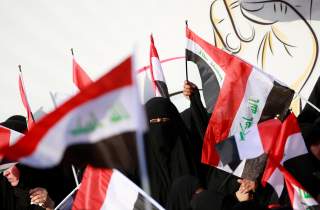 Iraq’s anti-ISIS war is quickly drawing to an end. ISIS fighters are routed and Iraqi sovereignty over territories, held by the Islamic State from June 2014, has been re-imposed. This, in itself, sounds like a great success and probably a new beginning for the Iraqis.

Yet, the future looks fraught with dangers, unless serious efforts to create a unified Iraq through reforms are initiated. An equally Herculean task is to skillfully balance the roles and influence of regional and extra-regional actors, not to let them use Iraq as an open turf for power contestations.

Iraq’s future, in a nutshell, depends on its ability to avoid the Lebanonization of domestic politics (a breakdown of the political process due to conflicts over power-sharing and the choice of who would be put in a particular powerful position) and external Balkanization syndrome (domestic or regional fragmentations that threaten a state).

Iraqi political process, since its creation in 1932 under the shadow of the infamous Sykes—Picot Agreement of May 1916, has witnessed a three-way competition between the Shias, the Sunnis and the Kurds. They have jockeyed and jostled against each other for power and influence along ethnic, religious and sectarian lines. Consequently, no national political party has ever developed to represent Iraqis across ethnic or religious divides or to unite all Iraqis from a single national platform. There was, and is, an Iraqi state, not truly an Iraqi nation.

Long Ba’athist rule under Saddam Hussein (1979–2003) badly affected Iraq’s cauldron of ethnic and religious tensions. Saddam created a highly centralized state structure, pursued the policy of Arabization to assimilate the non-Arabs, mainly the Kurds, into the mainstream culture and preferred the over-representations of minority Sunnis in all important centers of state power (defense, oil resource, council of ministers etc.). The Shias and the Kurds were deeply alienated.

The Kurds were victimized most: they suffered heavily at the hands of Saddam’s Sunni government (the 1988 chemical attack on the Kurdish town of Halabja being the most notorious example); they also currently face the wrath of the Shia-dominated Iraqi government for holding the pro-independence referendum on September 25, 2017. The referendum revealed the Kurds’ deep distrust in both the Shias and the Sunnis. Their regional autonomy in northern Iraq, what is officially dubbed Kurdistan Regional Government, came more as a gift from the Americans for collaboration with the invading U.S. forces to dismantle the Ba’athist regime. Previously, the U.S.- and UK-imposed no-fly zone over northern Iraq in the wake of the 1991 Gulf War made Kurdistan a de facto state.

The rise of the ISIS brought significant territorial gains for the Kurds over Kirkuk, a multiethnic province rich in oil resources, but the Iraqi army’s recent push to drive Kurdish Peshmerga forces out of Kirkuk has curbed their aspirations for independence for good. It has also checked similar moves for Sunni independence project by Sunni Arab tribes in the northwestern provinces of Ninevah, Anbar and Salah al-Din.

Despite the elimination of ISIS fighters and the defeat of Peshmerga forces in Kirkuk, Iraq is nowhere close to fostering a sense of national identity. Shortages of interethnic and intrareligious understandings, social synergy, the culture of coexistence, and social cohesion to prevent social fragmentations are acute. Keeping Iraq united and unified is the biggest challenge for Iraqi prime minister Haider al-Abadi. In fact, a post-ISIS Iraq may prove more dangerous than an Iraq with ISIS presence.

A good way to start forging that national identity may be via a commonly agreed power-sharing arrangement. Back in 2007, the United States proposed to introduce a federal system of government in Iraq to decentralize power and transfer resources to the federating units. The then Shia-led Nouri al-Maliki government and the Sunni leaders strongly criticized the idea as they viewed it as a violation of Iraqi sovereignty. The Kurds favored federalism as the only way to guarantee their historical and cultural identity in Iraq.

After more than a decade, the Iraqis should rethink the idea of federalism more seriously to hold together their diverse interests, antagonistic social, cultural and political aspirations, and identities. India and Canada have preserved their territorial integrity opting for power-sharing under federal arrangements. Use of force by the Sunni minority or the Shia majority to keep the country united is very unlikely to work on a long-term basis. Saddam tried that policy, and it failed.

From 2003 onward, Iraq has been “Europe’s Balkan” in the Middle East. A host of competing regional and extra-regional powers (Iran, Saudi Arabia and the United States) have sought power and influence by favoring this or that Iraqi group. The United States and Saudi Arabia prefer an Iraq firmly rooted in their sphere of influence, away from Iran. Conversely, the Iranians have sought to put Iraq in their regional orbit, denying the Saudis and the Americans a strong foothold in the Arab country. The emergence of ISIS created a sort of de facto unity between them, but the demise of is unraveling their pent up differences—business as usual.

After a long estrangement of three and a half decades, Saudi Arabia restored in 2015 diplomatic relations with Iraq that have been cut off since 1990. Riyadh’s support for the Sunni groups during U.S. occupation yielded little result and is now wooing the Shia leaders to produce leverages in Iraqi politics, but with little hope for success.

The United States has regained some support in the Iraqi public in the fight against ISIS. Many Iraqis saw U.S. military support as crucial to defeat ISIS; many of them viewed U.S. financial support, which Iran cannot offer, in the face of declining oil prices, as equally crucial to bail out Iraq. That puts the United States in a strong position to compete against Iran.

Prime Minister al-Abadi should play deft diplomacy to draw political, economic and investment support from all regional parties plus the United States to rebuild post-ISIS Iraq. Tilting too much to any powerful actor will simply damage Iraq’s long-term interests. It is high time that Iraq put all domestic and external actors on the same boat to make sure it avoids a risky future.

Mohammed Nuruzzaman is an Associate Professor of International Relations at the Gulf University for Science and Technology, Kuwait.