Responding to China's Rise: Could a 'Quad' Approach Help? 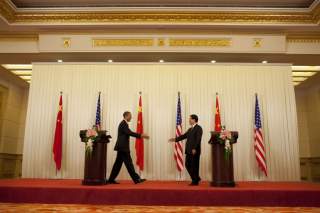 On the sidelines of the ASEAN Regional Forum meetings in 2007, assistant secretary–level diplomats from four countries—the United States, Japan, India and Australia—convened the “quadrilateral security dialogue.” Then, after only one meeting, largely in response to complaints from Beijing, the initiative died.

For the sake of long-term peace and security in the Indo-Pacific region, it is something that should be revived.

Dr. Mark Brawley, a professor at McGill University in Montreal, has done some interesting work looking at the misalignment of policies among British, French and Soviets in the lead-up to World War II. He demonstrates that largely due to domestic factors, the three countries developed such different strategies for dealing with German power in the 1920s that by the 1930s, it was virtually impossible to formulate an effective coordinated response.

Appeasement did not spring from nowhere in 1938. It was a policy choice conditioned by faulty, inconsistent assessments of German power by the various parties and domestic political trade-offs made decades prior.

The United States, its allies and security partners, such as India, face a similar problem today regarding Chinese power.

This is not meant to equate the People’s Republic of China (PRC) with prewar Germany. The differences between the two situations are multiple. The lessons of prewar Europe, however, do raise critical questions about the management of emerging major powers. Develop the right approach with regard to China, and it will pave the way for a prosperous and peaceful Pacific century. Fail to do so, and catastrophe could repeat itself in Asia, with all the implications that it would have for American blood and treasure.

Both this year, and at talks in late 2013, the dialogue also included scholars from outside the quad countries. The Yuchengco Center from Manila’s De La Salle University was what organizers called the “plus” partner in 2013 and Indonesia’s Habibie Center hosted the talks as “plus” partner this year. These “plus” countries provided additional regional perspectives and served as critical sounding boards for quad participants.

Convening a regular consultation among these same players—but at an official level—would offer the political/security establishments of the four countries an action-forcing opportunity to share assessments of Chinese power and coordinate responses.

Similar to the private initiative, they could also reach out to “plus” partners on a selective and rotational basis. Outside perspectives are important for keeping the discussion grounded in regional dynamics. Others in the region, such as Indonesia and the Philippines, have their own equities and challenges associated with China and the current political/security order. It would be a mistake not to consult them.

The Chinese concerns that derailed quad consultations eight years ago are likely to reemerge in the lead-up to new talks. No ruling establishment wants to see its nation a topic of formal international coordination. To address reasonable Chinese concerns and neutralize unreasonable ones, officials and private analysts should share with the Chinese the assessments resulting from their discussions. It could be done through the myriad of dialogues each already has with Beijing, or it could be done as an extension of the quad-dialogue proceedings. This would offer Beijing opportunities to clarify its intentions and fill in gaps in understanding about its military’s posture and capabilities in a confidential and constructive environment.

Dr. Brawley’s analysis points to another important fissure in European coordination in the 1920s. “The very thing the French desired—stunting German economic recovery—was against long-run British economic interests,” he writes. The UK needed a healthy German economy in order to recover from World War I and compete with the United States. Downplaying the threat of German power also allowed it to reduce military spending (through the so-called “ten-year rule”).

Today, by contrast, there is no similar debate with regard to China. None of the quad governments are talking about “stunting” Chinese economic performance as a way to manage Chinese power. The best interests of all concerned lie in its economic success—for the sake of their own economies and because the impact of failure on China’s national-security policy is unknowable and likely massively destabilizing.

China’s economic performance over the last several decades has also been a great humanitarian boon to the living standards of the Chinese people. China’s Pacific and Indian Ocean neighbors have no interest in seeing this change.

Economic issues should be taken off the table as a topic for quad coordination. There is no valid public-policy reason to prioritize economic engagement among the quad countries over any other participants in the global economy. To do so will only distort their markets and the markets of players left out. China’s economy is a mixed authoritarian-market model, still very much in a long transition from central Communist party control. Its economy should rise or fall on how completely it makes this transition, not on the strategic calculations of its neighbors.

There is a “security dilemma” embedded in the idea of the quad. Beijing’s oft-stated concern over “containment” could be reinforced, and the actions it takes in response could make conflict more likely. By the same token, however, failure of other powers in the region to properly assess the implications of China’s power may now jeopardize their shared interests down the road, and yet still lead to conflict when they move to defend those interests.

The United States, its allies and partners must put their heads together and coordinate assessments of policy responses. The best they can do to avoid provoking Beijing in the process is to be as transparent and encompassing of regional concerns as possible, and treat the global economy as an area of the commons, not unlike sea and air.