A Restrained Foreign Policy is Becoming More Popular in Washington 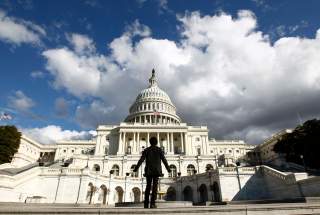 Donald Trump’s pull out of Syria, the Senate’s recent vote to end American support for the Saudi War in Yemen, and Tulsi Gabbard’s announcement that she may run for President in 2020 all suggest we are at a pivotal moment in U.S. foreign policy. The Senate’s historic vote, which reasserted Congress’s right to decide on matters of war, suggests a recognition that foreign policy is back on the debating table after decades of being “above politics.” Gabbard constitutes a unique constellation of foreign policy positions, many of which may bridge the chasm between the views of the public and those of the political class and mainstream media. Trump himself recognized this and nodded to his base when he decided to withdraw U.S. troops from Syria.

Large swathes of the public, on both the left and right, believe that the foreign policy status quo of incessant interventionism has brought little benefit to ordinary Americans. A J. Wallin Opinion Research survey revealed that 71.0 percent of Americans believed Congress should restrain military action. 86.4 percent felt the military should be used only as a last resort. Some 63.9 percent felt that military aid, both money and weapons, should not be provided to regimes like Saudi Arabia. Preferences for restraining military action overseas crossed boundaries of political party and researchers acknowledged that rarely do issues enjoy such bipartisan consensus. A study by Boston University (Douglas Kriner) found that attitudes against military intervention were running high amongst those communities which had lost soldiers. Survey Sampling International revealed similar findings, that a greater share of military veterans (often more likely to be Republicans), 61 percent, are weary of foreign intervention than the general public. Sample Survey International polling found that 79 percent of Americans felt any extra funding should focus on domestic issues.

As I argued in January 2018, voicing the public’s concerns regarding status quo foreign policy allows astute politicians to carve out a unique and popular position. This is now being recognized more broadly. Trump’s acknowledgment of this is seen in his decision to defy the foreign policy establishment, despite the fact that this would leave him open to outrage and criticism from both major parties and the mainstream media. The Senate’s historic vote to end U.S. support for the Saudis in Yemen, led by Bernie Sanders and championed by upcoming Democrats like Ro Khanna, reflects Senators’ awareness of this. It was the first time that the War Powers Act, established in 1973 just after the end of the Vietnam War, had been utilized.

A pioneer of left-wing populism, Bernie Sanders also ended his relative silence on foreign policy in 2018. Sanders called for building a global democratic movement to counter authoritarianism as manifested in Trump, American allies like Saudi Arabia and official rivals like Russia. This reflected his credentials as a democrat, liberal and supporter of a foreign policy shaped by morals. His highlighting of obscene levels of global inequality demonstrated his credibility as a socialist. In advocating for democracy globally, Sanders does, however, risk being lumped in with neo-cons like George W. Bush who used democratization and human rights to justify interventions for the benefit of a few elites.

Enter Tulsi Gabbard. Gabbard has defied the trend of mainstream Democrats dutifully avoiding criticisms of foreign policy for fear of being seen as “weak” by a mythical pro-war public. She abjured the bipartisan foreign policy consensus of many decades by staking out a position popular with the traditional anti-war left and the new anti-establishment right.

Gabbard’s “Stop Arming Terrorists Act” appealed to left-wingers opposed to regime-change wars as well as right-wingers focused on fighting terrorism and distrustful of their own government. Her opposition to U.S. support for the Saudi-led calamitous war in Yemen gained traction with both humanitarians and conservative anti-Saudi nationalists. While post-Khashoggi the Saudi Arabia brand has become toxic, Tulsi was ahead of the curve. She mirrored Britain’s Labour opposition which wedged the British Government, undermining its credibility amongst conservative voters disconcerted by arms sales to the theocratic Saudi regime. Her opposition to U.S. involvement in Syria too appealed to the anti-regime change left and Trump supporters who viewed the conflict as between a secular Syrian government and Islamist rebels. Opposition to U.S. military action against the Syrian government, beyond isolated strikes, is also seen across the broader population according to opinion polls over years. Even support for Trump’s 2017 strikes sat at around 50 percent, with 41 percent opposed. Tulsi Gabbard’s criticism of Israel also reflects a growing trend amongst the American public, not reflected in the political class.

For a public tired of spending trillions on foreign wars while infrastructure crumbles at home, Tulsi’s simple, sharp, realist message might gain traction. The fact that her opposition to conventional interventionist foreign policy comes from a position of prioritizing the interests of the American people, allows her to appeal to Republicans weary of humanitarian, internationalist arguments against war.

In 2016, Trump positioned himself as the anti-interventionist candidate; in 2020, it seems he knows that he’ll face some unprecedented competition for that title.

Kadira Pethiyagoda is a nonresident fellow in Asia-Middle East Relations at the Brookings Doha Centre. Follow him on Twitter at (@KPethiyagoda).