Restraining the Impulse to Expel Turkey from NATO 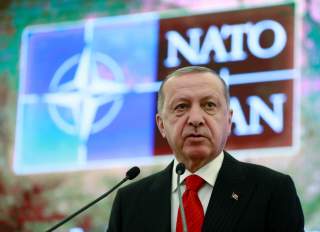 President Recep Tayyip Erdoğan provides the United States and its NATO allies regular, nearly constant, reasons to end their alliance with Turkey; indeed, he pushes them toward defining Turkey under the rule of Erdoğan as an adversary instead or an ally. The international irritants are many. First, there is Erdoğan’s accommodation of—rather than adamant antipathy toward—Syrian president Bashar al-Assad, his alignment with Russia and Iran, and his threats against U.S.-partnered, anti-Assad and anti-ISIS Kurdish People’s Protection Units because of their connections to the opposition and pro-Kurdish Peoples’ Democratic Party and the insurgents of the Kurdish Workers’ Party. Second, Erdoğan has been insistent that the United States deliver F-35 stealth strike fighters and other equipment while he purchases Russian S-400s surface-to-air missiles, which would endanger the F-35s and potentially compromise for Russia their classified technology and data. Third, he has been warming up to Russia, which was evident in the brittle and tactical Russia-Iran-Turkey trilateral consortium on Syria. Fourth, he has been improving—although still wary—relations with Iran and simultaneous hostility to Saudi Arabia and its Gulf partners while ignoring Turkey-based financing mechanisms for ISIS. Fourth, he has been welcoming of regional anti-Western Islamists, including defeated insurgents fleeing from the anti-Western conflicts they created. Fifth, Erdoğan’s has inserted himself into the Venezuela crisis, a country in which Turkey has no national interests, and sided against the United States—and almost the entire Western Hemisphere—in support of President Nicolas Maduro alongside Russia, China, Bolivia and Cuba.

Domestically, Erdoğan stands at odds with the values and policies of his NATO allies in his swelling authoritarianism and control over and, too often, incarceration of the political opposition, the judiciary, and the media. Then, of course, there is his purge of tens of thousands of civil servants, teachers, and judges, as well as the arrest of thirty thousand or so military officers, in the wake of the failed 2016 coup. He has seized private media outlets, shut down over one hundred TV and radio stations, newspapers and publishing houses, and arrested hundreds of journalists. It seems increasingly impossible to define Erdoğan’s Turkey as part of the Western community, let alone as a U.S. or NATO ally.

But the results of the April 7 municipal elections provide some reason to distinguish Turkey from Erdoğan notwithstanding his attempt to conflate the two ala Louis IV’s l’etat c’est moi assertion. Therefore, the United States and NATO should restrain—at least temporarily—the impulse to define Turkey as an adversary. Notwithstanding all of the state resources Erdoğan has diverted to support his Justice and Development Party (AKP) candidates and his virtually unrestricted control over the media, the election commission, the courts, the bureaucracy, and the schools, the voters of Ankara and Istanbul as well as Izmir, the third most populous metropolis nevertheless elected opposition party mayors. Erdoğan’s opponents now govern Turkey’s two most important municipalities, its political and financial capitals, which are the equivalent of Washington and New York. The two cities represent two-thirds of Turkey’s GDP. Yet more galling to him, Istanbul was Erdoğan’s own original power base, the source of much of his wealth, and the one from which he rose to challenge and overcome the eight decades of Turkey’s secular identity following the 1924 abolition of the Caliphate and founding of the Republic by Mustafa Kemal Atatürk. In fact, Ekrem İmamoğlu, the presumptive new mayor of Istanbul made an in-your-face pilgrimage the day after his victory to Anitkabir, the mausoleum of Ataturk in Ankara. İmamoğlu will remain in power if Erdoğan cannot use state mechanisms to reverse the electoral outcome as he has done using the putatively independent Supreme Election Council to reverse or annul half a dozen mayoral results won by Kurdish-oriented Peoples’ Democratic Party candidates, which is something it did for Istanbul on May 6. Since the election, some AKP leaders have already surfaced, publicly criticizing Erdoğan for his authoritarianism and attempts to manipulate elections.

Erdoğan’s move away from the alliance has been painful. Turkey has been a loyal and reliable member since shortly after NATO’s founding. It maintains NATO’s second largest military after only the United States. Its armed forces have fought alongside the United States in Korea, Vietnam, and Afghanistan, even when some other NATO members have not. Before Erdogan’s self-conscious, public move to a more Islamic identity, Turkey was staunchly Kemalist with insistent aspirations of becoming a core member of the European Union notwithstanding the EU’s frustrating rebuffs. It occupies a key geostrategic position on the northeastern Mediterranean with, in particular, control of the Dardanelles and the Bosporus, therefore naval access to the Black Sea on Russia’s southwest border.

Of course, if Erdoğan’s trajectory is sustained and Turkey moves away from the Western alliance in policy, values and relationships, it cannot, and probably would not want to, remain a transatlantic ally. But the eviction of Turkey from the Western alliance should come, if at all, after a long and serious review and the conclusion that there are no other options. The voters of Ankara and Istanbul knew what they were doing; in spite of the AKP advantages, this was a repudiation of Erdoğan’s management of Turkey’s economy and political path. Too much can be read into the elections. Erdoğan was right to note that the elite in Ankara and Istanbul did not accurately represent the conservative, religious identity of much of Turkey’s population. But just as improper assumptions were made about the secular identity of Turkey’s population before Erdoğan, too much can be made of its move away.

It would serve the long-term interests of the United States and its European allies to watch and wait a while. Most important, it would serve U.S. interests to assure Turks that the friction stems from policies not inherent to identity and, notwithstanding frustration with Erdoğan, does not extend to Turkey. Turkey would continue as a valuable member of the Western alliance should it choose to remain so, elect its leaders correspondingly, and adopt its values and policies accordingly.  Better that than a regrettable expulsion, which could lock Turkey into an embrace with U.S. adversaries and against U.S. interests. The recent elections have provided a welcome, if unexpected, opportunity to pause and perhaps find a way to help reverse course within Turkey and between our two countries before the downward spiral of relations congeals into enmity, antipathy and animosity.

Gerald F. “Jerry” Hyman is a non-resident senior associate at the Center for Strategic and International Studies and a Global Fellow at the Woodrow Wilson Center for International Scholars. He was president of its Hills Program on Governance between 2007 and 2016. From 1990–2007, he held several positions at USAID, including director of its global Office of Democracy and Governance from 2002–2007. From 1985–1990, he practiced law at Covington & Burling in Washington, DC and he taught Anthropology and Sociology at Smith College from 1970–1985.