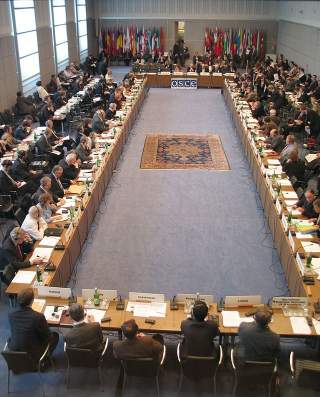 In its essential effort to rein in Russia along the European perimeter, the West is making a large and unwitting strategic error.  Aided by a 25 percent decline in the price of world oil (and correspondingly of natural gas), the principal source of Russian revenue, the West is trying to curb Russia through the use of economic sanctions.  But at the same time, NATO has left the actual territorial security of a number of states such as Kazakhstan or Georgia, to say nothing of Poland and the Baltic Republics, thoroughly vulnerable to manipulation, infiltration, and perhaps direct attack.

The problem is not that revenue denial will fail.  The problem is that revenue denial will work all too well in a fashion that NATO least expects and in a fashion that it is unprepared to counter.  The West hopes to discourage Russian president Vladimir Putin from risking aggrandizement.  But in reality, by neglecting its own European defenses at the same time that it undercuts Russia’s sources of revenue, the West increases those risks. In essence, the West, you could say, has its strategic priorities upside down.

Instead of deterring Russia militarily while continuing to engage it economically and in energy terms, the United States and Europe have undermined territorial security while attempting to cut off Russia’s principal sources of income.  This gets the sequence of strategies wrong.  Persistent sanctions without credible deterrence are likely to elicit exactly the response from Putin that the West wants to oppose.  By leaving itself open to incremental aggression fed by irredentist manipulation, the West scourges the Russian bear through economic denial, while not caging it in any viable way militarily.

A credible and effective Western deterrent is certainly not easy to build, given the nature of the Russian threat and the wider geopolitical landscape. Russia is at an advantage in terms of geographic proximity and in terms of military capacity to move heavy weaponry to a battle front in countries like Kazakhstan or Ukraine.   Without NATO tanks and artillery in place to convincingly oppose Russian intimidation, an ally like Poland or Lithuania is subject to Putin’s braggadocio or worse.  Deploying a few troops hints at intent but placing heavier capability on the ground and offshore conveys genuine determination. Only the latter can strengthen the deterrent that NATO, and the U.S. in particular, have extended to its most exposed members on the eastern frontier.

Moreover, on at least two counts, global politics has not been kind to Western strategy.  First, by enlarging the boundaries of NATO and of the EU, yet by leaving a ring of countries between NATO and the Russian border unaffiliated, the West signaled that it was unwilling to defend these countries but at the same time was open to their eventual participation in its economic and perhaps security institutions. Countries such as Georgia and Ukraine could, and in fact were encouraged to, nurture their westward aspirations, and yet were left unprotected in the naïve hope that geopolitical competition was no longer a reality.

Interpreted from Putin’s vantage point, this lack of incorporation into the NATO and the EU structures meant that each of these recently independent countries had become an inviting target for Russian expansionism and revanche. This is why the belated incorporation of Ukraine into the EU trade configuration came as such a shock to Moscow and why it has sought to overturn a trade and commercial association that from the liberal market perspective only ought to have benefitted Russia. But the absence of clear, or any, Western security guarantees to Ukraine and earlier to Georgia meant also that Moscow thought there were few costs for a forceful reassertion of Russian influence. The westward tendencies of these “in between” countries provided the motivation for Russian intervention; the lack of Western protection created the permissive environment for it.

Second, global conflict has trifurcated.  In addition to the tension between Europe and Russia, the emergence of IS and the Syrian civil war in the Middle East, and the problems between China and its neighbors in the East and South China Seas beg for America’s attention.  Rebalancing toward Asia, and reengagement in the Middle East, telegraphed to Putin that the United States is likely to allow Russia a comparatively free hand in Eurasia. These other regions – and two wars in that “arc of instability” from the Persian Gulf to the Hindu Kush – distracted the U.S. and provided Moscow the opportunity to present itself as a potentially helpful partner on specific issues (e.g., logistics for operations in Afghanistan). For Moscow this was doubly beneficial: not only the U.S. was unlikely to pay attention to the European theater, but also it may have been willing to trade a more assertive Russia in its former imperial possessions for a cooperative stance of Russia on Iran or Afghanistan.

In brief, Russia was not deterred from revising the status quo. But Crimea should have taught the NATO countries a lesson.  It is a lot easier to deter aggression than to have to defend against it under conditions of actual force use.  It is also a lot easier to defend against aggression than to have to try to reverse military occupation.  When measured against the potential gains, the risks and costs of trying to reverse military occupation – not to mention the sheer operational difficulty of evicting, rather than defending from, an aggressor – frequently discourage action.

Deterring aggression against Estonia, Latvia and Lithuania is far easier than attempting to defend them in an actual firefight.  But such a defense is probably a lot more feasible than having to reverse military occupation involving the type of aggression and annexation to which Crimea has been subject.  Naturally, there is a tight relationship between the ability to defend and the credibility of deterrence: we cannot deter if we doubt our capacity to defend these territories.

For the past two decades the Western Alliance did not have to think about defending their easternmost lands, letting its capabilities atrophy. Now it does, and voices are heard about the “indefensibility” of these NATO members. It will now take strong political will to reverse the decline in military spending and to think long and hard on the most appropriate investments to be made. Whatever specific military acquisitions and doctrinal changes are introduced – and we can let the military planners think this through – the point is that the West so far got the strategic sequencing wrong: economic sanctions should not precede the establishment of credible deterrence. To those who fear that any rapid rearming or repositioning of NATO forces might precipitate an even more aggressive response from Putin, we suggest that economic sanctions are doing exactly this. Suppose that the price of oil and natural gas drops another 25 percent?  Where will that leave Russia?  The economic hardships that are coming for Russia, combined with the perception that the relationship of deterrence has been fraying because of the relative changes in military strength (Russia is modernizing, while the West is at best anemic), create both an incentive and an opportunity for Moscow to be more belligerent.

American historical experience ought to remind the United States of the consequences of adopting the wrong strategic sequence.  In thinking about the lessons of December 1941 for the relationship between Putin and the democracies today what comes to mind is the remarkable coincidence of strategic error that led to disaster at Pearl Harbor, and the catalytic but unwitting part played by the conscious use of economic sanctions.

On the one hand, combined with an absence of coherent intelligence information is the total lack of preparedness for an attack.  Ammunition was in storage under lock and key.  Anti-aircraft guns were left unmanned.  Aircraft were parked in tight formation on the tarmac, hindering their take-off, allegedly to prevent sabotage.  Barriers to submarine entry into the lagoons went undeployed, supposedly to ease the movement of ship traffic.  Commanders of the U.S. Pacific Fleet obviously did not believe a surprise attack by Imperial Japan was likely or perhaps even feasible.

It is not the employment of economic sanctions that is to be criticized here.  Rather it is the failure to coordinate strategies that is deplorable.  Apparent naïveté about the imminence of attack on virtually the entire Pacific fleet while at anchorage at Pearl Harbor is to be contrasted with the ever tightening noose of economic sanctions designed to restrain Japanese foreign policy behavior.  Japanese officials were keenly aware that they could not, as an official Japanese Foreign Ministry cable put it in July 1941, “endure [such a situation] much longer. Consequently, our Empire, to save its very life, must take measures to secure the raw materials of the South Seas. Our Empire must immediately take steps to break asunder this ever-strengthening chain of encirclement which is being woven under the guidance and with the participation of England and the United States, acting like a cunning dragon seemingly asleep.”